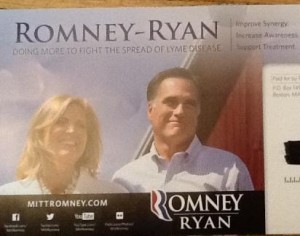 “When you mix presidential politics with Lyme disease politics, you get some pretty strange chemical reactions.”

Last week, GOP candidate Mitt Romney mailed a flyer to Virginia voters promising to help fight Lyme disease. This is the first time in history that a presidential candidate has taken a position on Lyme disease and the need for access to care.

LymeDisease.org doesn’t endorse candidates. But we appreciate that a nominee for the highest office in the land recognizes the seriousness of tick-borne diseases and how difficult it is for Lyme patients to get treatment.

However, when you mix presidential politics with Lyme politics, you get some pretty strange chemical reactions, especially in the political blogs. Unfortunately, not all are helpful to the Lyme cause.

Virginia’s political leaders are trying to get a handle on this growing threat to public health. In 2011, a governor’s Lyme disease task force held hearings throughout the state. VA’s Loudoun County has declared 2012 “Lyme Disease Awareness Year.” Tick-borne disease garners a lot of press in Virginia. It’s not a stretch to assume the state’s voters are thinking about the topic.

ROMNEY AND RYAN WILL DO MORE TO FIGHT THE SPREAD OF LYME DISEASE.

It’s a disease that begins from a small bug…

But Lyme Disease has quickly become the most common vector-borne disease in the United States, devastating our families and our pets.

As president, Mitt Romney will ensure that real action is taken to get control of this epidemic that is wreaking havoc on Northern Virginians.

IMPROVE SYNERGY
Ensure that government agencies have an open line of communication and work with patients, researchers, doctors, and businesses in an objective, comprehensive manner.

SUPPORT TREATMENT
Encourage increased options for the treatment of Lyme Disease and provide local physicians with protection from lawsuits to ensure they can treat the disease with the aggressive antibiotics that are required.

The Mother Jones blog was one of the first to report on the Romney Lyme mailer. Puzzling over the candidate’s choice of political tactic, it wondered if the campaign was targeting “middle class, politically moderate moms who like to hike.”

To its credit, Mother Jones acknowledged there is legitimate scientific debate about Lyme disease. Says the blogger: “Romney is actually injecting himself into an intense dispute within the medical community, pitting the International Lyme and Associated Diseases Society (ILADS) against the Infectious Diseases Society of America (IDSA). IDSA believes there is “no convincing biological evidence” that Lyme is a chronic infection, while ILADS thinks there are flaws with the current testing system.”

Mother Jones also observed: “That Lyme disease epidemic Romney is so concerned about? The spread of the disease is aided and abetted by climate change. Lyme Disease already costs the US $2.5 billion annually, is expected to double in geographic scope over the next 70 years. But Romney has said government should do nothing to stop man-made climate change—if it’s even happening at all.”

In contrast, the on-line magazine Slate (owned by the Washington Post) rejected Lyme disease as a legitimate campaign issue.

Under the headline: “Why Is Romney Campaigning on Medical Quackery?” Laura Helmuth, Slate‘s science and health editor, pretty much equates chronic Lyme with mental illness. Helmuth states flat out that if a person tests negative for Lyme disease, a “good doctor” would “explore a diagnosis for depression.”

What a bizarre approach to the story! And who is Helmuth to decree what a “good doctor” should do? (What if someone shows symptoms of hantavirus, dengue fever, or West Nile? If those tests turn out negative, should the doctor’s next step be to diagnose that patient with depression, too? Or does this advice only apply in cases of suspected Lyme disease?)

Helmuth says Romney’s mailer translates into: “Forget the science, just channel your legitimate fear of a dangerous disease and your misguided fear of the medical establishment into a vote for us.”

Why does asking for open communication and encouraging increased treatment options translate into “Forget the science”?

There’s a range of responses from other news outlets about the Romney mailer:

The Huffington Post: “The campaign’s decision to spend such a specific mailer highlights the importance it has placed on reaching suburban voters in the pivotal swing state.” (Not commenting on Lyme per se, just examining the mailer as a campaign tactic.)

The Washington Post: “According to the CDC there are less than 1,000 reported cases of Lyme disease in Virginia a year — in a state of eight million people.” (Seems to imply it’s too small a number to worry about. With no acknowledgement that even the CDC agrees that surveillance numbers don’t reflect the true number of cases.)

US News & World Report: “But Durland Fish, an epidemiology doctor at Yale University and a board member of the American Lyme Disease Foundation, says Lyme disease treatment is ‘perfectly adequate’ at this point and usually entails a simple 10 day treatment of antibiotics.” (Fish, an author of the hotly contested IDSA Lyme guidelines, was investigated as part of the Lyme anti-trust action concerning conflicts of interest.  Not exactly a neutral source.)

Unfortunately, the conspiracy theory seems to be asserting itself most boldly in cyberspace. The New Yorker blog, dissing Romney for talking about “this non-epidemic of a non-illness,” cites the IDSA as the ultimate authority on all things having to do with Lyme disease. And the hits keep coming….

Hang on to your hats. It’s going to be a wild ride.