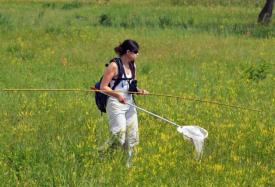 Research by two Union College (NY) professors found that areas that have been restored to their native habitat of scrub pine and grassland have dramatically fewer ticks than before–saving a significant amount of money in avoided medical costs for tick-borne disease.

From the Times-Union of Albany NY:

ALBANY — Fires used in the Pine Bush to restore native habitat of scrub pine and open grassland also greatly reduce chances that hikers will pick up ticks that could carry Lyme disease.

A study by two Union College professors has found areas of the Pine Bush that have already been restored carried 98 percent fewer ticks — and that each avoided case of the tick-borne illness saves on average about $8,500 in medical costs.

The concept on display in the report by Economics Professor Stephen Schmidt and Kathleen LoGiudice, a biology professor, is that of “ecosystem services” — how the environment can perform functions with benefits to people and that those benefits carry a monetary value.

Habitat restoration in the Pine Bush can plausibly be justified solely on the benefit of Lyme disease cases averted, according to the report, which will be published in the peer-reviewed journal Restoration Ecology.