LYME SCI: Are hidden ingredients in pills making you sicker? 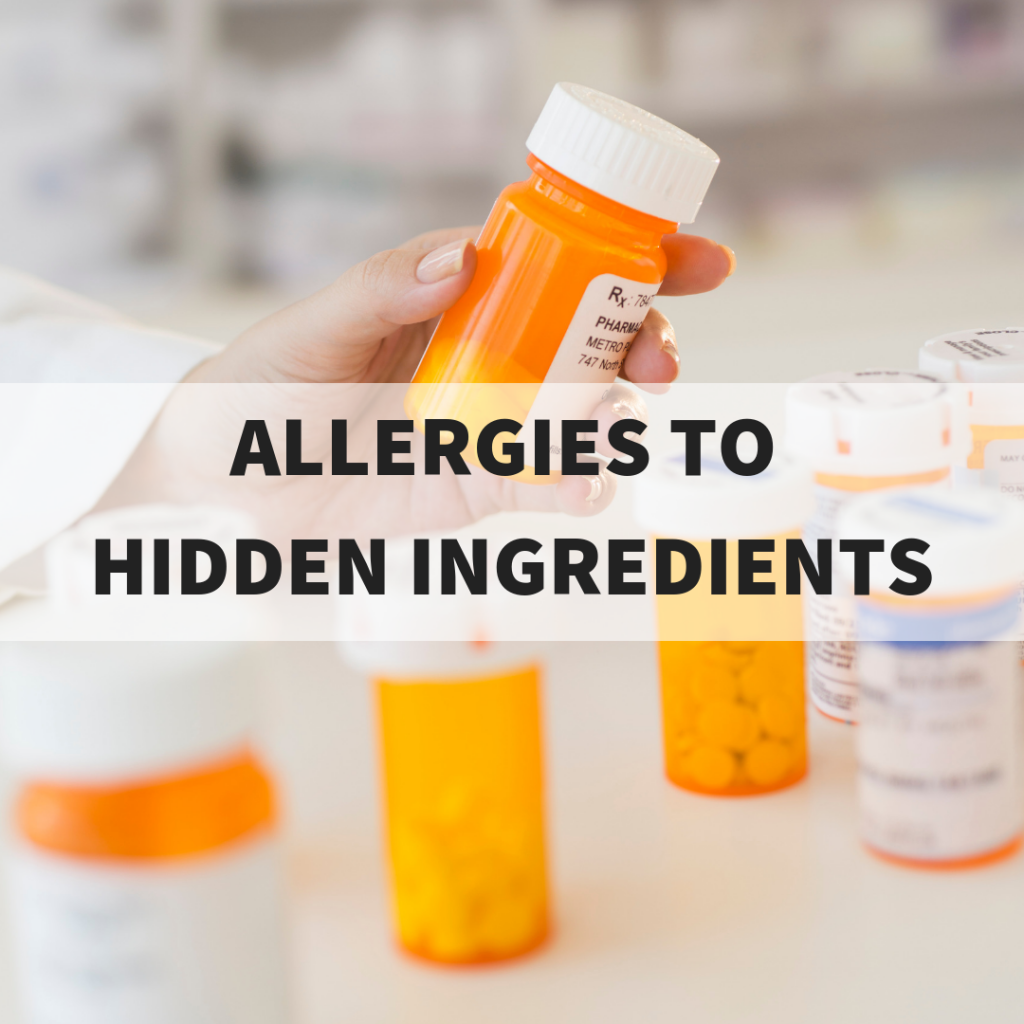 Two years ago, we discovered that my daughter was allergic to microcrystalline cellulose (MCC)–one of the most common fillers in medications and supplements.

Just two months prior to that discovery, she was diagnosed with mast cell activation syndrome (MCAS).

This followed a lengthy illness and treatment for Lyme, Ehrlichia and Bartonella. Despite treatment, her health continued to decline precipitously. It was the most terrifying time of her illness.

Come to find out, reactions to medications are very common in patients with MCAS.

However, according to Dr. Lawrence Afrin, a specialist in hematology and mast cell disease, it’s not usually the medications themselves that are the problem.

It is more likely that MCAS patients will react to one or more of the “inactive” ingredients—the fillers, binders, dyes, or preservatives in their medications—known as excipients.

(Only a handful of medications—as opposed to their excipients—are known to trigger mast cells. These include some antibiotics and all SSRI anti-depressants. Read the full list here)

At the time, I’d never even heard of excipients in medications, let alone MCC.

When is a herx not a herx?

Often I hear Lyme patients say they are having a “Herxheimer” reaction when they experience a negative reaction to a medication.

A Jarisch-Herxheimer reaction is a very distinctive response that happens shortly after starting antibiotic treatment for a spirochetal infection like syphilis, Lyme disease, or tick-borne relapsing fever.

I wrote extensively here on how to distinguish the difference between an adverse drug reaction and a Herxheimer reaction.

The easiest tip-off that the adverse reaction is likely to be to the excipients, is if you initially feel better after starting a new medication, and then around day three begin to have MCAS symptoms.

Every ingredient in a medication that isn’t the active drug itself is labeled as an “excipient.” Ideally, excipients are inert and have no pharmacological effect. But there have been growing reports of adverse reactions to these extra ingredients.

Excipients can range anywhere from simple organic ingredients (like corn starch or sugar) to more complex substances with potential for toxicity at higher doses or after prolonged use (like dextran or polyethylene glycol.)

Here’s how we discovered my daughter’s allergy to MCC.

When you know better…

In the Fall of 2016, my daughter had developed sensitivities to multiple chemicals and could eat only two foods without having an allergic reaction. (Read about that here)

Thankfully, one of her doctors thought to question what fillers were being used in one of her medications— ketotifen, a mast cell stabilizer. I called the pharmacy and was told the prescription contained two ingredients: ketotifen and lactose.

Knowing she’d been lactose-intolerant for years, I felt angry and relieved all at once. I thought “EUREKA, this is it!”

Later that day, her doctor called in the prescription for ketotifen with the request to use ascorbic acid (Vitamin C) as the filler.

Long story short, the pharmacy screwed up and used MCC instead. After picking up the new prescription, out of caution, I only gave her a half dose—and she had an allergic reaction.

That day, I emailed Dr. Afrin, who had assisted me in finding a MCAS doctor in California. He replied:

“Yes, I’ve seen microcrystalline cellulose (MCC) act as a trigger in *some* mast cell patients. Sometimes it’s any type of MCC, and sometimes it’s specific to the type of plant from which the cellulose has been sourced.

I was not happy. But at least we had determined that she had a problem with MCC—an important piece of our puzzle.

So, I quickly went to the cupboard and discovered that every single one of her vitamins and supplements contained MCC. We’d been unwittingly sabotaging our efforts all along!

At the time that we discovered my daughter’s allergy to MCC, we’d just assembled a team of doctors who were very knowledgeable about MCAS.

Under the guidance of this care team, we switched to a PCAB-certified custom compounding pharmacy with experience in MCAS patients.

(Compounding pharmacies tailor the medication to a patient’s personalized needs. They can add or subtract ingredients as the prescribing doctor specifies.)

Here are steps we took to rule out any further allergies to her medications:

Step 1 – We had the pharmacy send us samples of two types of empty pill capsules. Hard capsules come in either vegetarian or gel capsules. Because the vegetarian capsules are made with cellulose, we opted to try the gel capsule first and she was fine. (Note: gel caps are made from animal products, so if you have alpha-gal syndrome or are allergic to meat, you may need to stay with the vegetarian options.)

Step 3 – Once we determined she was OK with ascorbic acid in the gel cap, we had the pharmacy custom compound her medications accordingly.

That is how we have done all her prescription medications and supplements since, and December 2018 we celebrated 24 months without a single allergic reaction. Yay!

Another way to determine what you’re reacting to is to enlist the aid of your pharmacist. Unlike over-the-counter medications, where the FDA requires every ingredient to be on the label, excipients are not listed on prescription medications.

Because of this, you must ask the pharmacist to do an internet search to discover all the ingredients and excipients in the medication you had an adverse reaction to.

Next you will need them to make a list of everything in a medication that you are OK with. From there, you will need to compare the differences between them and try to determine what gave you the adverse reaction.

One thing to keep in mind is that excipients can vary between brand name and generic medications. So, if you are taking a brand name medication and then switch to the generic, you may be able to quickly determine the culprit.

And just because you are okay with one generic brand doesn’t mean you will tolerate the next. Generic manufacturers are allowed to change formulations, whereas the patented name brand medication will remain consistent.

What is the role of excipients?

Excipients are derived from either organic or inorganic chemicals and have different purposes. Primarily, they are used to enhance the manufacturing and proper absorption of a medication. Currently, there are nearly 14,000 different excipients listed on the FDA’s Inactive Ingredient Data Base.

In general, medications that are formed into hard tablets have more excipients than those in capsules.

Because the active ingredient is often measured in micrograms (think grains of salt), the medication will be diluted along with a filler, so it can be more easily packaged and administered. In some pills, up to 90% of the volume can be excipients.

The CDC estimates that around 6% of the population suffers an allergic or adverse reaction to food. The most common food allergies are cows’ milk, chicken eggs, shellfish, fish, soy, peanuts, wheat and tree nuts.

So, if you have a known food intolerance or allergy, start looking for those ingredients.  For example, if you are allergic to wheat, you’ll want to search for ingredients that may be derived from wheat, such as cellulose, dextrins, maltodextrins, pregelatinized starch, and sodium starch glycolate.

The following excipients have also been reported to cause adverse reactions:

Bottom line, if you’re having frequent reactions to medications while being treated for Lyme disease, don’t always assume it’s a Herxheimer reaction. You may actually be reacting to one or more of the hidden ingredients in your medications.

Evaluating Quality in a Compounding Pharmacy