Ways to prevent and/or treat COVID, per Horowitz and others 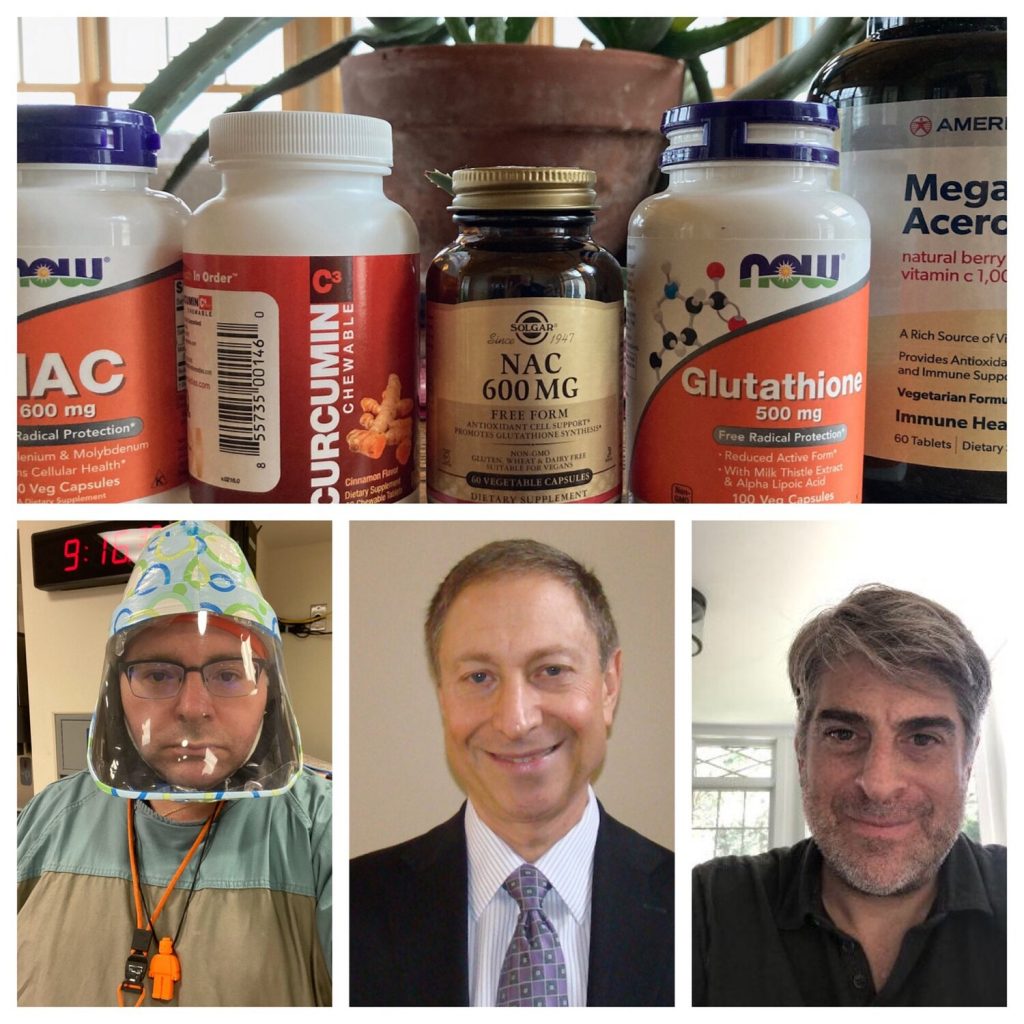 Becoming infected with COVID-19 — even after exposure to it — is not inevitable.

The virus is a bear, yes. But, if masks and distancing fail, it may be vanquished using safe, over-the-counter supplements for which there are supporting studies. The substances, used everyday by thousands, may even heal.

The evidence for this is still speculative since no clinical trials have been done. We need those studies — now. But there is a wealth of medical literature to suggest that we can take some control over our fate with a simple visit to a health food store.

I’m writing this article — lest it read like an ad for Vitamins-R-Us — for 10 selfish reasons: My two grown children, their spouses and five children, and their dad — my husband. Ten people I love. Among the group are students, a teacher and a school administrator.

I fear school reopening. I want to protect my family.

So I contacted Dr. Richard Horowitz, a renowned Lyme disease physician who in April published the first study of two COVID patients treated with three natural supplements; they were also given the antimalarial drug hydroxychloroquine and an antibiotic. At 9 and 11 days into treatment, with both patients seeing gradual but incomplete improvement, a corner turned.

The breakthrough, as Horowitz calls it, came after he increased the dose of glutathione, an antioxidant in many foods that protects against inflammation, supports key cell functions, and, key to COVID care, is essential to a healthy respiratory system.

Within an hour, both patients were breathing better. “I definitely felt like the edge was taken off my symptoms,” said one of them, David Roth, 53. “I felt it fairly quickly.”

Natural supplements with exotic names like N-acetylcysteine (NAC) and glutathione were shown to have antiviral potential “years before COVID was on the scene,” Dr. Horowitz said. Having had success in using them and others to treat two dozen cases so far, he thinks they should be put toward preventing COVID.

“Although anecdotal,” he said, “I have heard from patients who were on NAC and glutathione when they were exposed to COVID-19, that they did not get sick or test positive for the virus, when others around them did.”

What Horowitz did was apply to COVID the lessons of treating tick-borne pathogens, which also can cause harmful inflammation and over-stimulated immune systems.

Cytokines are made by the body to fight invaders; but when there are too many, when the immune system is on overdrive, the cytokines turn on the host itself. Glutathione and related supplements may well stop COVID’s “cytokine storm syndrome.”

Since those first two cases, Dr. Horowitz has seen the same pattern of recovery repeated in other COVID cases. He has put patients on glutathione, related supplements and a cheap, safe antiviral drug called ivermectin, and none has needed hospitalization.

He dropped the controversial drug hydroxychloroquine because studies have been confusing and mixed. “I’m sitting on the fence on it personally,” he said. (See more below on how the supplements may work and Horowitz’s view of hydroxychloroquine. I plan a blog soon on my earlier HCQ reporting on this wrongly vilified and politicized drug.)

Horowitz, who has published influential studies on diagnosing and treating Lyme disease, is not one to think small. He and his long-time research collaborator Phyllis Freeman have published a plan to track, prevent and treat the virus. As part of it, he is urgently seeking sponsors for a clinical trial to test selected supplements against COVID.

“We need to start thinking outside the box,” he said. Look at what happened, he notes, at a week-long summer camp in Georgia, where three-quarters of campers later turned COVID-positive. Horowitz’s plan includes a screening tool that could have picked up on those infections earlier – by asking about cough, shortness of breath, loss of smell, fever and so on – and could be used in schools to ferret out cases.

At my request, Horowitz agreed to share his regimen to prevent infection and, further, prioritized the list for me because of the complexity and expense of supplements. He advises that “patients bring my articles to their doctor and speak to them” first.

To treat the infection, Horowitz uses the same supplements as in the prevention protocol but in higher doses. He further adds high-dose Vitamin C and ivermectin, which shows promise for COVID and would have to be prescribed by a physician. (See treatment details below.)

Horowitz, Freeman and their spouses take the supplements. Richard and Lee Horowitz recently vacationed in Cape May, N.J., where, he said, “I didn’t have an iota of worry. And we are two people in our 60s.”

Among Horowitz’s ardent new fans is Dr. Lou Rotkowitz, 43, a Queens, N.Y., emergency room physician who said he almost died from COVID, contracted five months ago when he intubated a patient. He spent 10 days in critical care, leaving the hospital debilitated, with only inhalers and oxygen, and “on my own to figure out” how to fully recover. He called Horowitz, whose glutathione success was featured in a New York Post article. Horowitz explained how supplements might repair the cellular damage of COVID.

“It was all starting to make sense to me,” he said. “It’s basic molecular physiology.” Rotkowitz took glutathione, NAC, alpha lipoic acid and ubiquinol QH, a form of  CoQ10 that reduces stress on cells and supports the heart, among other things.

“It helped me to breathe better, helped my energy level to improve,” he said. “I had a really, really rough go of it. These things are really of value.”

Horowitz’s regimen isn’t the only option to protect against COVID.

The Cleveland Clinic article said there “is likely little risk” from taking the supplements, but called for additional research on dosages. Horowitz agreed that in the context of COVID, “We just don’t know the optimal doses.”

For Horowitz’s patient David Roth, relief was in a 2 gram oral dose of glutathione 11 days into the illness. “I felt some of the result,” he said, unlike the more subtle effects of perhaps 10 supplements, probiotics and drugs. “I have no idea if the hydroxychloroquine helped,” he said. “It could’ve been the passage of time.”

Why are these supplements effective?

In brief, here’s what the scientific literature says on how the supplements work and their potential benefits:

Glutathione might be called the antiviral warrior in the COVID battle, playing a role, one article reported, in “antioxidant defense, nutrient metabolism, and regulation of cellular events.”  Of key importance, it’s essential to healthy lungs and respiration. One research article suggests its deficiency may increase COVID severity and drive up deaths.

N-acetylcysteine (NAC) has been found to neutralize harmful bodily stressors and promote production of glutathione in cells. It also “may help to reduce oxidative and inflammatory damage in pneumonia patients,” according to published research.

Alpha lipoic acid is an antioxidant that controls respiratory inflammation and, along with glutathione and NAC, quells cytokine storms; with glutathione, it detoxifies the body of heavy metals.

Zinc is “known to play a central role in the immune system,” making people low on it susceptible “to a variety of pathogens,” according to Horowitz’s paper.

As with many people, I’m grappling with the best course. For months, my family (except for the four-month-old) has been on elderberry and Vitamins C and D3, which has been shown to decrease the severity of COVID infection. Some of us have taken curcumin and, recently, quercetin along with C. I have started some of the supplements on Horowitz’s list after reading the considerable scientific literature.

How much, however, is too much?

Horowitz told me in response that he has not seen any toxicity from the supplements at recommended dosages.  The exceptions, he said, may be alpha lipoic acid, which can cause hypoglycemia (low blood sugar) in a minority of patients; those with the condition should not take more than 300 mg twice a day. High-dose glutathione can cause a slight rash or wheezing that can be cleared with Benadryl.

For now, he wants to see his regimen put to a scientific test.

“If we were to do a randomized, clinical trial of the nutritional supplements now,” Horowitz told me, “we would have answers by the fall, regarding their antiviral and anti-inflammatory effects.”

And that would give people like me a great deal of reassurance.

Supplements listed above remain the same, except dosage changes.
Glutathione, 2000 mg, 2 to 3 times per day
NAC, 1200 mg twice a day
Vitamin C, 2000 mg 3 times a day
Physician-prescribed ivermectin 0.2 mg/kg once a day for 10-14 days (Must be physician prescribed)

Dr. Horowitz’s comment on how the supplements work to treat and potentially prevent COVID

“Although anecdotal, I have heard from patients who were on NAC and glutathione when they were exposed to COVID-19, that they did not get sick or test positive for the virus, when others around them did. This can potentially be explained by the antiviral effects of NAC and glutathione, which have been published in the peer-reviewed medical literature, years before COVID was on the scene.

Supplements like NAC, alpha lipoic acid and glutathione also have anti-inflammatory effects. The way the viral machinery turns on is with oxidative stress, driving inflammation, and these supplements lower inflammation, by blocking a switch inside the nucleus called NF Kappa B. I have used this approach for over two decades, lowering cytokines and inflammation in Lyme disease patients.

Some of the same cytokines seen in COVID-19 are exactly the same cytokines seen in Lyme patients, especially during Herxheimer reactions, which is how I knew to use this approach, which has been effective. I also used to treat Babesia patients with shortness of breath with IV glutathione and would see similar results, i.e., improvement of shortness of breath.

So all of my years of treating tick-borne diseases have given me a perspective that other doctors or researchers may not have regarding the efficacy of this approach. I would suggest however, until a randomized, controlled trial is done, that patients bring my articles to their doctor and speak to them about taking NAC, alpha lipoic acid and glutathione. I believe it will help protect them against the inflammatory effects of the virus.”

“The hydroxychoroquine debate is a typical one in medicine. First a treatment is said to work, then it’s examined in greater detail in multiple studies, where there are conflicting results. Some older studies showed benefit. Others did not. One study resulted in a clinical benefit, if the patient was also taking zinc. Other studies showed no benefit and potential side effects (nausea, arrhythmias).

Didier Raoult in France, who is the French researcher who initiated the trial of HCQ/macrolide trials, still believes that the regimen is effective. I’m waiting to see how it all plays out, especially because the Lancet had to retract negative comments about the combo. In the meantime, in part to avoid the debate, and because there were some good studies showing the efficacy of ivermectin for COVID-19 (a drug I had a lot of experience using), I decided to use it for the treatment of COVID-19 along with nutritional support like NAC, ALA glutathione, and zinc.

We have seen success using ivermectin, where patients have reported improvements within hours of use. An in vitro study also showed efficacy of ivermectin in killing the virus in culture, with two clinical trials (one involved patients on respirators) showing some benefit. We still need better trials, but the basic science is there supporting its use, and as I said, I have seen patients respond positively within hours of taking it.”

Mary Beth Pfeiffer, an independent investigative journalist, is author of “Lyme: The First Epidemic of Climate Change.” She can be contacted through her website, thefirstepidemic.com, where this article first appeared.