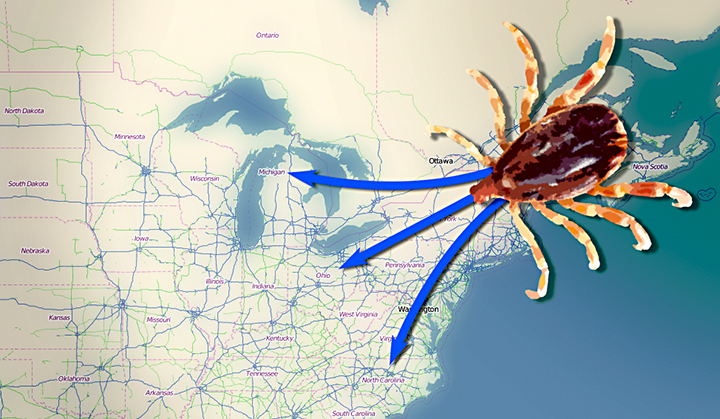 Scientists at Yale School of Public Health are starting to examine the relationship between Lyme disease and babesia.

Mice that are already infected with the pathogen that causes Lyme disease appear to facilitate the spread of a lesser-known but emerging disease, babesiosis, into new areas.

Research led by the Yale School of Public Health and published Dec. 29 in the journal PLOS ONE used laboratory experiments, mathematical models, and fieldwork data to find that mice infected with the agent that causes Lyme disease (Borrelia burgdorferi) are at increased risk for also transmitting Babesia microti,  the pathogen responsible for babesiosis, and could be enhancing the geographic spread of this emerging disease. Both diseases are transmitted to humans through the bite of infected black-legged ticks (Ixodes scapularis).

The finding provides a possible answer as to why human babesiosis is only emerging in areas where Lyme disease is well established, said Maria Diuk-Wasser, senior author of the study, who performed the research in collaboration with Peter Krause’s and Durland Fish’s research groups while she was assistant professor at the Yale School of Public Health. Diuk-Wasser, who maintains an adjunct position and active collaboration with the Yale School of Public Health, is an associate professor at Columbia University. Other study collaborators were at the Yale School of Medicine, Tufts Medical Center, and the Royal Melbourne Institute of Technology.

“Ticks and natural hosts are commonly co-infected in nature, so understanding how these pathogens may influence each other’s abundance and distribution is key for public health,” Diuk-Wasser said. “We found that B. burgdorferi and B. microti co-occur in ticks more frequently than expected, resulting in enhanced human exposure to multiple infections that can cause more severe symptoms and sometimes make diagnosis more difficult.”

Ninety-five percent of all Lyme disease cases are reported from 14 states (primarily on the East Coast and in the Midwest), and there are approximately 30,000 new cases reported each year. Babesiosis is found in similar regions, but 95% of cases are concentrated in the seven “core” Lyme disease states (Connecticut, Massachusetts, New Jersey, New York, Rhode Island, Minnesota, and Wisconsin). About 1,000 new cases of babesiosis are reported annually.

While the two diseases share some of the same symptoms, babesiosis is potentially fatal in immunocompromised patients and can be transmitted through blood transfusions in addition to tick bites, posing an additional public health threat.

Refined mathematical models may allow scientists to better predict areas that are at risk for B. microtiexpansion and to assess whether methods to reduce B. burgdorferi infection in ticks and mice may simultaneously reduce B. microti infection, Diuk-Wasser said.