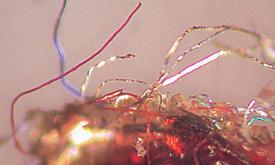 The British newspaper "The Guardian" takes a long look at this mysterious condition that is typically dismissed by the medical establishment. (Many people with this condition also have Lyme disease.)

From The Guardian (UK):

It’s a mysterious condition that affects tens of thousands worldwide. But what is it?

It all started in August 2007, on a family holiday in New England. Paul had been watching Harry Potter And The Order Of The Phoenix with his wife and two sons, and he had started to itch. His legs, his arms, his torso – it was everywhere. It must be fleas in the seat, he decided.

But the 55-year-old IT executive from Birmingham has been itching ever since, and the mystery of what is wrong with him has only deepened. When Paul rubbed his fingertips over the pimples that dotted his skin, he felt spines. Weird, alien things, like splinters. Then, in 2008, his wife was soothing his back with surgical spirit when the cotton swab she was using gathered a curious blue-black haze from his skin. Paul went out, bought a £40 microscope and examined the cotton. What were those curling, coloured fibres? He Googled the words: “Fibres. Itch. Sting. Skin.” And there was his answer. It must be: all the symptoms fitted. He had a new disease called morgellons. The fibres were the product of mysterious creatures that burrow and breed in the body. As he read on, he had no idea that morgellons would turn out to be the worst kind of answer imaginable.

Morgellons was named in 2001 by an American called Mary Leitao, whose son complained of sores around his mouth and the sensation of “bugs”. Examining him with a toy microscope, Leitao found him to be covered in unexplained red, blue, black and white fibres. Since then, workers at her Morgellons Research Foundation say they have been contacted by more than 12,000 affected families. Campaign group the Charles E Holman Foundation states there are sufferers in “every continent except Antarctica”. Thousands have written to Congress demanding action. In response, more than 40 senators, including Hillary Clinton, John McCain and a pre-presidential Barack Obama, pressured the Centres For Disease Control And Prevention (CDC) to investigate; in 2006, it formed a special taskforce, setting aside $1m to study the condition. Sufferers include folk singer Joni Mitchell, who has complained of “this weird incurable disease that seems like it’s from outer space… Fibres in a variety of colours protrude out of my skin: they cannot be forensically identified as animal, vegetable or mineral. Morgellons is a slow, unpredictable killer – a terrorist disease. It will blow up one of your organs, leaving you in bed for a year.”

So it’s new, frightening and profoundly odd. But if you were to seek the view of the medical establishment, you’d find the strangest fact about this disease: morgellons doesn’t exist.