Microchip can electronically detect antibodies in a drop of blood 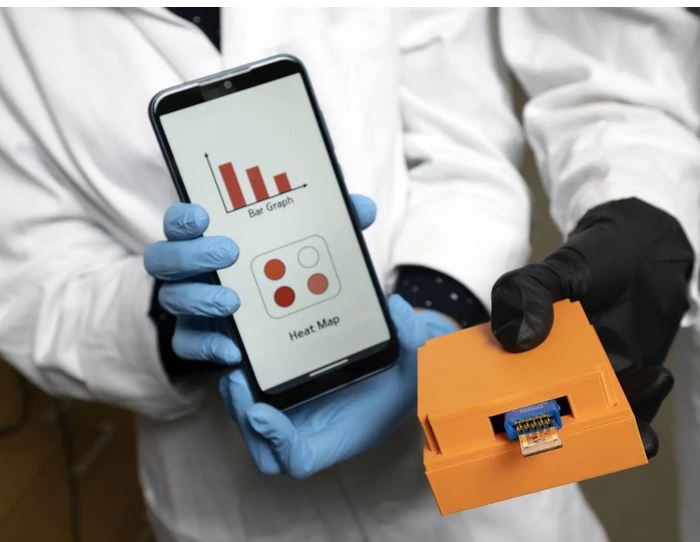 A single drop of blood from a finger prick. A simple electronic chip. And a smartphone readout of test results that could diagnose a Covid-19 infection or others like HIV or Lyme disease.

It sounds a bit like science fiction, like the beginnings of the medical tricorder used by doctors on Star Trek.

Yet researchers at Georgia Tech and Emory University have taken the first step to showing it can be done, and they’ve published their results in the journal Small.

Postdoctoral fellow Neda Rafat and Assistant Professor Aniruddh Sarkar created a small chip that harnesses the fundamental chemistry of the gold-standard lab method but uses electrical conductivity instead of optics to detect antibodies and indicate infection.

“At the heart of many diagnostics, something binds to something, and a signal is produced. That’s where the optics interact and generate a light signal,” said Sarkar, a faculty member in the Wallace H. Coulter Department of Biomedical Engineering at Georgia Tech and Emory.

“What Neda has done is figured out a way of making that binding event happen between a patient sample and something from the sensor itself, so that signal will be directly electronic.”

The “something” Rafat is using is silver, an electrically conductive metal. Her approach creates small silver deposits in tiny wells of the microchip, completing an electrical circuit that can be measured with a simple multimeter.

A new approach to diagnostics

The technique is a new approach to diagnostics like the rapid antigen tests that have become so familiar during the Covid pandemic. But the team’s tests do much more.

Rafat, Sarkar, and their team of researchers created multiplex chips, which means they can detect multiple different kinds of antibodies.

That allows one chip to potentially screen for multiple infections from just a single drop of blood. The team also can quantify the level of antibodies in the blood based on how much silver ends up on the chip.

In the case of Covid antibodies — which is where the team has started — the technique proved powerful enough to differentiate between samples with antibodies caused by a Covid infection and antibodies created solely from one of the mRNA-based vaccines.

“In terms of diagnostics, our approach is so generic, in a way, because immunoassays are so common. They’re used in infectious diseases, but also for noncommunicable diseases — autoimmune diseases or cancer or cardiovascular disease,” Sarkar said.

“Immunoassays are right in the center of so many diagnostics, and one whole class of tests can now be made into the electronic multiplex format using this technique.”

Instead of using fluorescence or light to detect antibodies — a powerful expensive approach used in centralized testing labs — the team coated tiny electrodes on their chip with antigens that bind with Covid-19 antibodies. When those antibodies were present in a sample of blood placed on the chip, the resulting interaction caused a small amount of silver to be deposited.

“Let’s say that we are detecting Covid-19 antibodies. The more antibodies we have, the more silver is deposited, and it’s more conductive and has lower resistance,” said Rafat, the first author on the Small paper. “This way, by relating the conductivity or resistance to the analyte concentration, we can also quantify the biomarker concentration.”

Sarkar said that could be an important tool to monitor the effectiveness of vaccines, especially as the coronavirus continues to mutate and booster shots could become a regular part of our lives. The multiplexing function also means chips could test for multiple variants of the virus with just the one drop of blood.