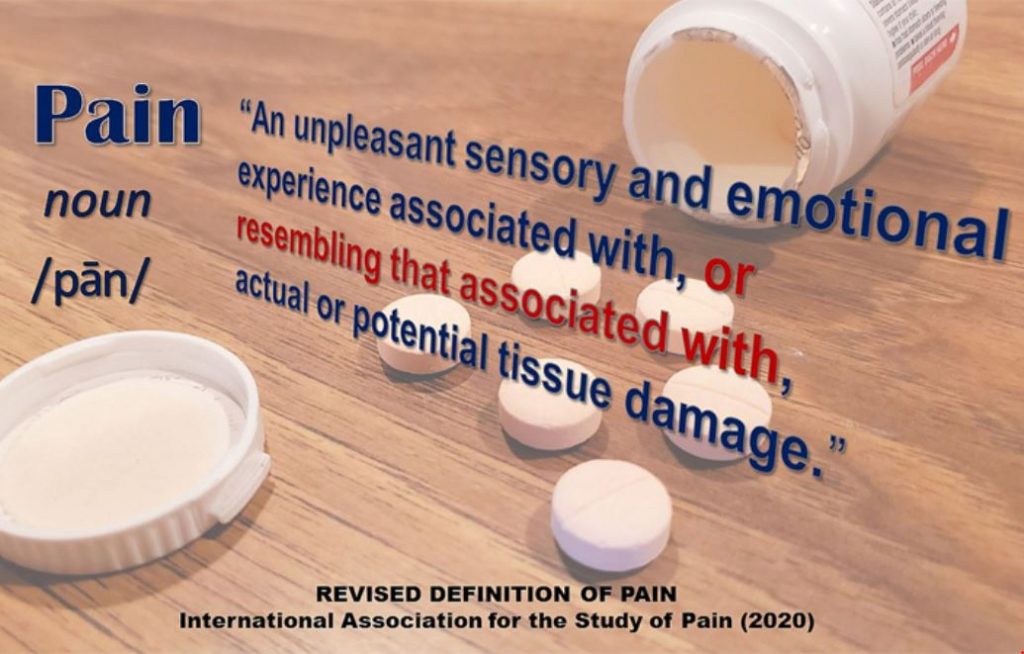 Johns Hopkins Medicine pain experts have joined the International Association for the Study of Pain (IASP) and collaborators worldwide to make a subtle but important update to the definition of “pain” for the first time in 40 years.

With this change, the experts aim to make pain diagnosis and management more inclusive of all people who experience it.

The revised definition is published in the September 2020 issue of the journal PAIN.

“Pain is not just a sensation or symptom. It is a much more complex condition that is important to acknowledge properly to guide basic science research, patient care and public policy,” says Srinivasa Raja, M.B.B.S. He is a professor of anesthesiology and critical care medicine at the Johns Hopkins University School of Medicine and chair of the IASP task force that created the revised description.

According to the researchers, the new pain definition — the first update since 1979 — features a key phrase (shown in boldface): “An unpleasant sensory and emotional experience associated with, or resembling that associated with, actual or potential tissue damage.”

The phrase is important, say the researchers, because it includes types of pain not well understood 40 years ago, such as nociplastic — where pain receptors are stimulated without evidence of the cause, such as with fibromyalgia — and neuropathic pain caused by a sensitized or maladaptive nervous system, commonly associated with chronic pain conditions such as persistent pains after surgery, nerve injuries and limb amputations (commonly called “phantom limb pain”).

The revised definition also is more inclusive of people who cannot express their pain in words. According to Raja, the previous definition used the word “described,” which excludes non-verbal behaviors to indicate pain in animals and certain vulnerable individuals.

“Changing this language enables physicians to adequately account for pain in disempowered and neglected populations such as children, the elderly and people with disabilities,” he says.

The updated definition can ultimately have an impact on access to health care, if adopted by insurance providers.

A 2016 survey by the U.S. Centers for Disease Control and Prevention estimates that 20.4% of U.S. adults live with chronic pain and approximately 20 million reported that pain limits the ability to accomplish tasks in their work and daily life.

“When pain affects peoples’ function, psyche and their social well-being, it needs to be recognized by insurance carriers that dictate who gets care and what aspects of their multidisciplinary care are reimbursed,” says Raja.

“Pain cannot be simplified to a 0 to 10 scale. Assessments instead need to look at the whole person, accounting for the cognitive, psychological and social factors that are critical to treating pain,” says Raja.