LYMEPOLICYWONK: Why Doesn’t the CDC Count Lyme Disease Cases in the South and the West? Everybody Else Does. 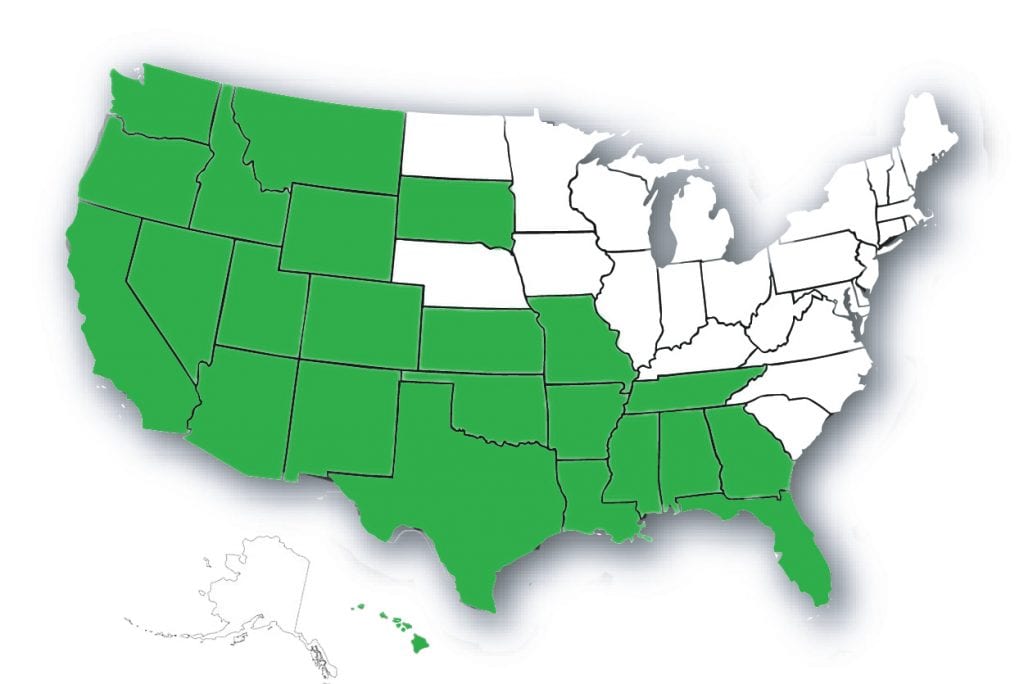 The risk of contracting Lyme disease depends on where you live or visit. The best way to determine an area’s risk is to look at a map. However, maps from different sources vary. For example, the CDC surveillance maps show exposure as primarily limited to the East Coast, but other sources suggest a much broader geographic risk of exposure—particularly in the South and the West.

At our last board meeting, I presented information about how different sources map Lyme disease, which we taped. You can watch that video, by clicking the arrow below.

MyLymeData and the CDC Maps Paint Different Pictures of Risk

On the map below, the states in blue have a higher number of people enrolled in MyLymeData than are included in total CDC case reports. (In green states, the CDC has more cases.) The differences reflected on the map suggest a broad pattern of underreporting by the CDC of Lyme disease in the South and the West. 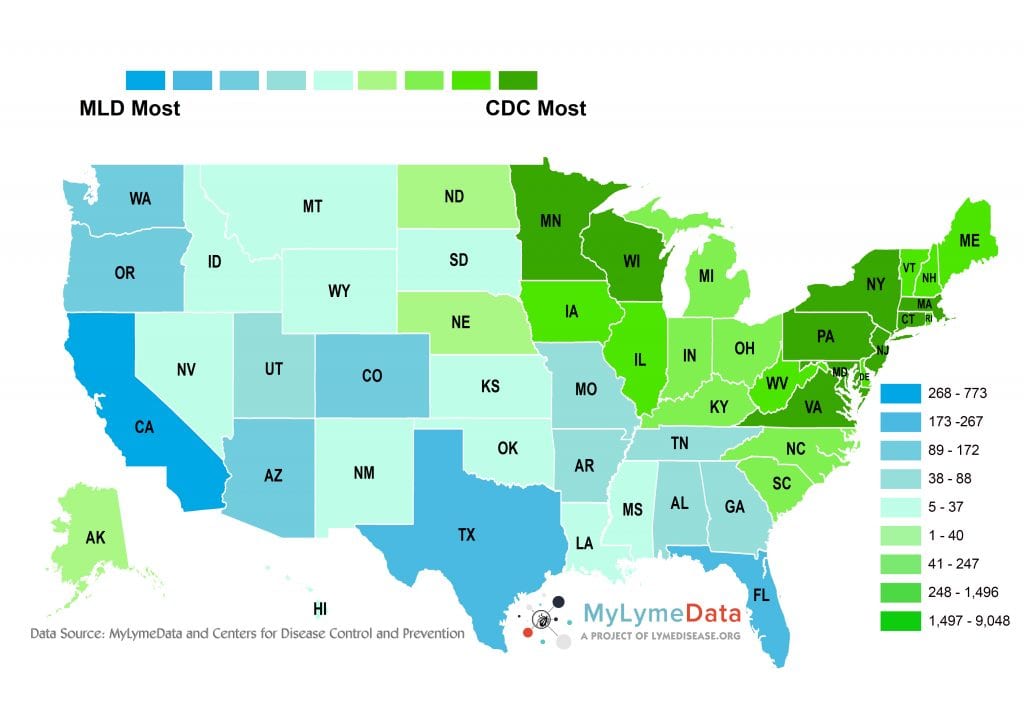 There are some important differences in the MyLymeData and the CDC statistics. MyLymeData collects information from participants regardless of when they were infected, while the CDC reports are for the year 2015. However, the MyLymeData cases included in the data collected by that time was 5,776—a far smaller sample size than the CDC’s (38,069). This means that the MyLymeData sample is about one-seventh of the cases reported annually by the CDC. Ordinarily, CDC cases should surpass MyLymeData cases across the board in every state just because their sample is so much larger.

In total, MyLymeData participants exceed the number of cases reported by the CDC in 24 states, mostly in the South and the West. (Scroll down to see the table.) As I explain more fully in the video, this suggests that there is systemic under-reporting by the CDC in southern and western states. 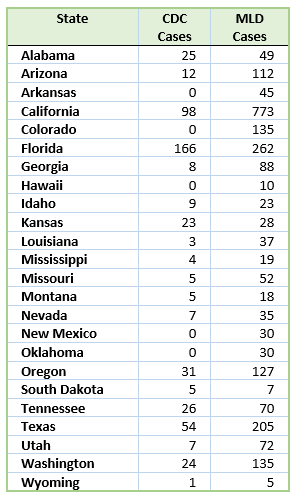 Other Sources of Data Confirm Greater Risk of Lyme Disease in the South and the West than CDC Reports.

We then looked at other sources of data suggesting risk–including the number of dogs reported by IDEXX who test positive for Lyme, and the number of patients who requested physician referrals from the International Lyme and Associated Diseases Society in that state. Remarkably, we found that every one of these other sources reflected higher numbers of cases in the South and West than the CDC did—sometimes by a staggering amount. Consider, for example, the number of CDC cases compared to the IDEXX canine cases. 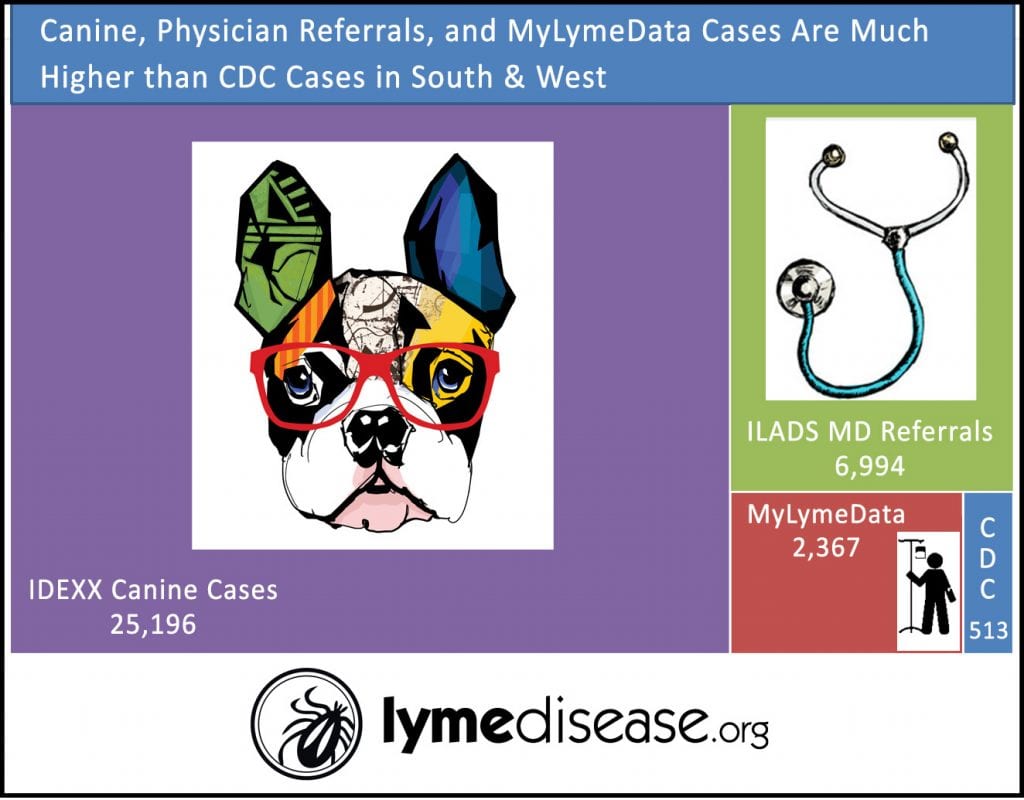 The table below shows how various data sources compare to the 24 states where MyLymeData reports more cases than the CDC reports. 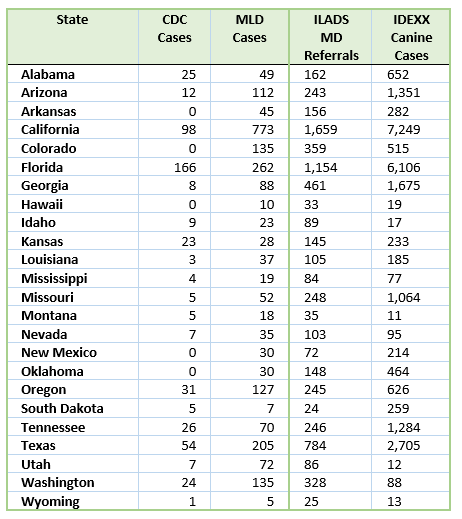 There are, of course, other considerations that the CDC might advance–for example, some people may acquire Lyme disease while traveling to another state.  However, the large number of canine cases confirm the existence of Lyme disease bacteria in all states and the geographic expansion of  Lyme disease carrying ticks (now in over 50% of US counties where tick studies have been conducted) reflects a growing geographic risk. Even in an area where no black-legged ticks have been identified, the key question is not so much whether the studies indicate they are present, but whether anyone has conducted tick flagging studies in the area.

A recent big data study using insurance data claims for patients with Lyme also confirms an expanded reach. For example, North Caroline is in the top 5 states for Lyme disease related insurance claims, but it is not in the CDC top 14 states.

What this data makes clear is that while Lyme disease is not everywhere, it could be anywhere. When we enjoy the outdoors or let pets who have been outdoors into our homes, we should be mindful of hitchhiking ticks who are looking for a blood meal and take appropriate precautions. Important points to remember: