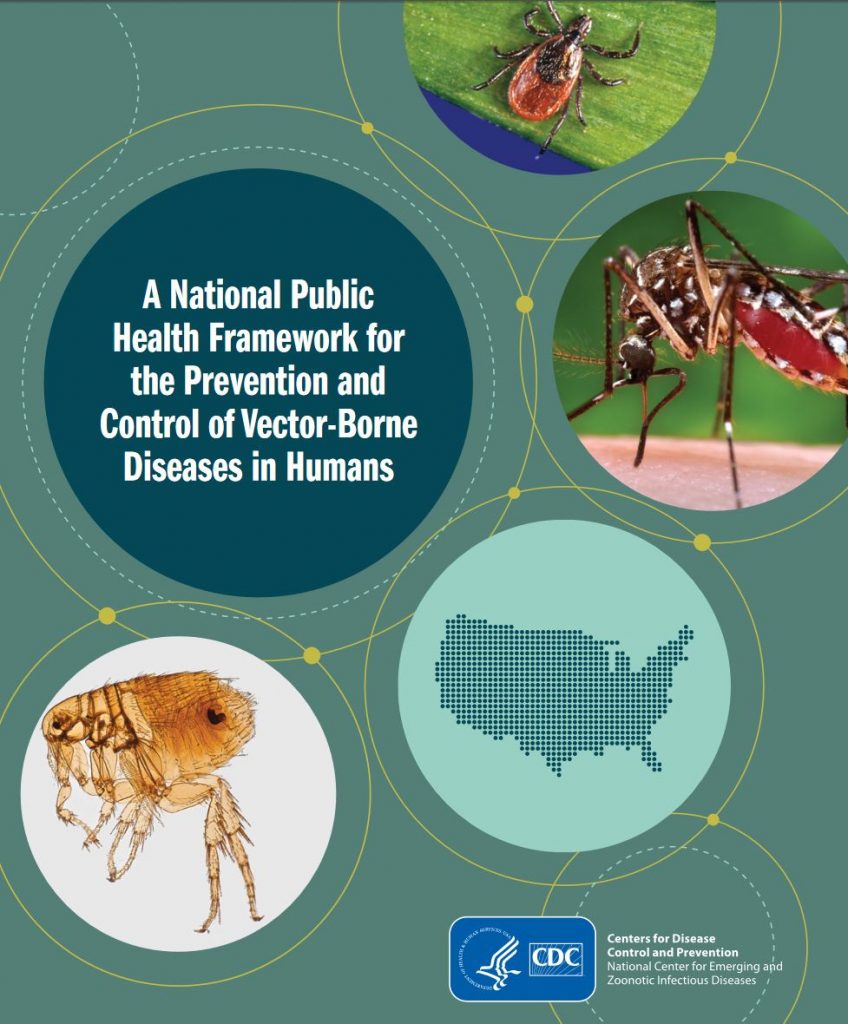 The Kay Hagan Tick Act, passed in 2019, called for the US Department of Health and Human Services (HHS) to develop a national strategy to address issues related to vector-borne diseases.

The idea was for HHS to co-ordinate with other federal agencies and departments, including the EPA, the Department of Defense, and others, to get everybody working towards the same goals.

In an encouraging development, CDC representative Ben Beard made an important announcement about that at Sept. 22’s Tick-Borne Disease Working Group meeting.

It’s called “A National Public Health Framework for the Prevention and Control of Vector-Borne Diseases in Humans.” The cover of the new plan represents ticks, mosquitoes, and fleas–all vectors that pose public health risks.

The National Strategy shall include objectives, activities, performance metrics, as well as a coordination and monitoring plan.

Protect people from illness, suffering, and death due to vector- borne diseases.

To successfully prevent and control vector-borne diseases in humans, a multidisciplinary set of stakeholders must be engaged, activated, and resourced. The stakeholders include the federal government; state, tribal, local, and territorial health departments; vector control agencies; healthcare providers; academic and industry partners; policy and decision-makers, including Congress and elected community leaders; public health partners, such as nonprofit organizations and associations of medical, entomological, and vector control professionals; and the public, including patients.

This new National Strategy was authorized by the Kay Hagan TICK Act of 2019 with oversight and coordination delegated to the Office of the Secretary in DHHS.

I sat on the TBDWG sub-committee that worked hard to develop a nationwide tick control plan, something the U.S. has never had before. So, I’m particularly excited to see our concerns reflected in the new framework.

This was the 15th meeting of the TBDWG that I have live-tweeted since the panel began in 2017. In addition to meetings of the entire Working Group, each of the individual sub-committees have met separately over the years,  representing countless hours for the members and staff of the TBDWG.

It’s gratifying to see the federal agencies coming together and recognizing the importance of tick-borne diseases and the TBDWG. Let’s hope the progress continues.