TOUCHED BY LYME: “Who am I when I can’t do what defines me?” 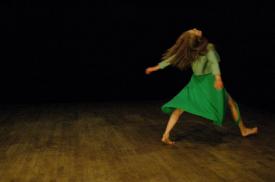 “Forms of Identification,” an independent short film based on the experiences of a dancer with Lyme disease, will screen at this month’s prestigious Marbella International Film Festival in Spain.

Jessica Ingersoll-Cope has a passion for creative dance. She started dancing as a child, studied dance and choreography at Colorado State, traveled to Ghana to study West African dance as an exchange student, and performed professionally in Colorado after college. In 2001, she moved to the San Francisco Bay Area, and became immersed in the vibrant arts community there, performing and choreographing with a passionate intensity. She felt strong, empowered, agile—and couldn’t imagine life any other way. Until late 2003, when suddenly life changed drastically.

First came severe panic attacks, then anxiety and profound fatigue.  Doctors couldn’t figure out what was happening to her, and the symptoms kept coming. Dizziness, disabling headaches, neuropathic pain and body-wide weakness.  Soon, dancing was out of the question. So were other basic activities—like holding down a job and managing day-to-day living.

It would take until 2006 until Jessica found a doctor who knew to evaluate her for Lyme disease. She tested CDC-positive for Lyme, accompanied by related ills, and embarked on a healing journey that would eventually incorporate long months of IV antibiotic therapy.

As sick as she was, Jessica says her biggest loss was the inability to dance. She had always defined herself as a dancer.  “I felt totally removed from the creative part of my identity,” she says. “It was like I didn’t exist anymore.”

It was at that point she talked with her good friend Kristen Tieche, who happens to be an experienced filmmaker. The two decided to use Jessica’s experience to make a film exploring issues of identity and loss. The result is a remarkable 15-minute piece of artistry called “Forms of Identification,” scheduled to be screened at the prestigious Marbella International Film Festival in Spain, October 14-16.

It was filmed over a 2-year period on location in the Bay Area (locals will recognize the streets of San Francisco, BART stations, and the Marin Headlands). It intercuts dazzling dance footage with medical realities like IV antibiotics flowing into a PICC line.  Yet, its message is much broader than just Lyme disease and dance.

The film asks: What is it that makes us who we are? What do we do when we can no longer do what used to define us? Who am I when all my circumstances have changed?

Jessica answered some of those questions for herself, as she collaborated with Kristen on the making of “Forms of Identification.”  She feels that being able to express her creativity through this film was an important part of her healing process.  She has recently finished up a degree program and works in the Bay Area as a school psychologist. She remains passionate about her creative pursuits, though they are taking her in a different direction they she had originally imagined.

The film has been submitted to festivals around the world, and will have a special Bay area showing on November 6.  (Details here.)

Click here to see a clip of the film and learn more about it.