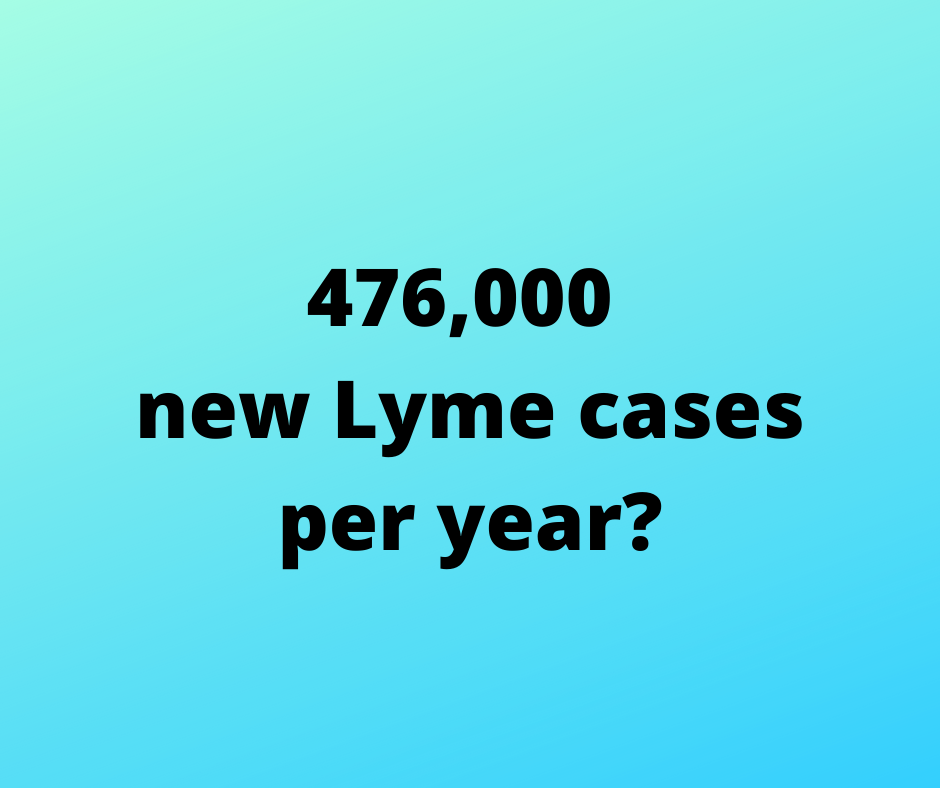 The Centers for Disease Control and Prevention (CDC) now estimates that 476,000 people contract Lyme disease in the US every year. They’ve even made it retroactive, recalculating the numbers for 2010-2018.

That’s 4.28 million cases in the last nine years, up substantially from the CDC’s previous estimate of 2.7 million for that same time frame.

The CDC’s severe undercounting of Lyme disease has long been a source of frustration in the Lyme community. To put these new numbers in perspective, let’s re-cap some important details.

“Reported” doesn’t mean what you think it means

For years, the CDC has listed the annual number of “reported cases” of Lyme disease as being in the neighborhood of 30,000. Now, I wager that when most people hear the term “reported cases,” they think it means how many cases have been—you know—reported. They tend to assume that the number is more or less how many people had Lyme disease that year.

But that’s not what the term means. “Reported cases” are those cases which have been thoroughly vetted and found to adhere to the CDC’s narrowly defined surveillance criteria.

And, since the responsibility of investigating those cases falls upon counties and states—not the feds—the vetting process is an uneven method at best. Some local entities put more resources into analyzing those cases than others. And some don’t do it at all.

Then, in 2013, the CDC made headlines by announcing that, based on various factors, the agency now estimated that the true annual number of Lyme disease cases in the US was probably 10 times the “reported” amount–more like 300,000.

Now, new studies have prompted the CDC to bump up those estimates even higher—to 476,000 per year—and to backdate the revisions to 2010. 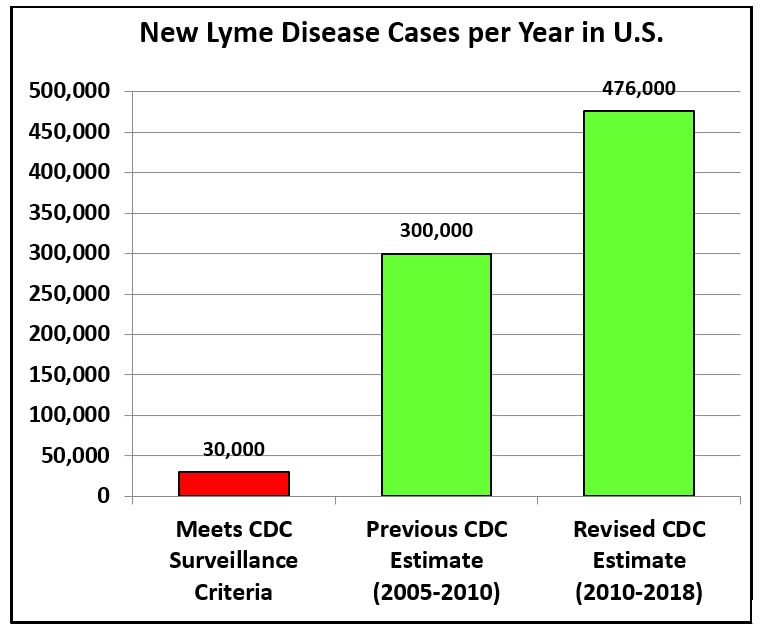 Where did this number come from?

How did officials arrive at 476,000? Mostly, they examined insurance company databases for anything that had been coded for diagnosis and treatment of Lyme disease for the period from 2010-2018. Evidence pointed to many more cases than the original estimate of 300,000 per year. (Consumer Reports explains more of the process here.)

The researchers cautioned that relying on insurance data has pitfalls:

[These databases] “do not contain information on uninsured persons, adults >65 years of age, or members of the military; consequently, these data are not entirely representative of the US population. Exploration of Medicare and Medicaid data may provide more insight into patterns of Lyme disease in populations not reflected in this analysis.”

A new page on the CDC website—How many people get Lyme disease—offers this caveat: “It’s important to emphasize that 476,000 is the estimated number of people treated for Lyme disease and likely includes some patients who were not actually infected.”

In my view, it would be more accurate to say “476,000 is the estimated number of people treated for Lyme disease and likely EXCLUDES untold thousands of patients who were actually infected.”

How many Lyme patients are misdiagnosed? In LymeDisease.org’s “Access to Care” survey, most participants had to see at least four physicians before getting diagnosed with Lyme disease. A sizeable portion had to see 10 or more. No insurance codes capture that.

And let’s not forget the whole “misdiagnosis by geography” thing. There’s no diagnostic code for “physician doesn’t think anybody can get Lyme in this state.”

And what about when insurance companies flat out refuse to cover anything related to Lyme disease? Any code for that?

So, it’s clear that the 476,000 number is not the final word on this topic. And yet, it’s an important step in the right direction. Although using insurance codes offers an imperfect picture of the problem, it’s a darn sight better than the CDC’s broken surveillance system.

Anything that brings us closer to accuracy should be encouraged.