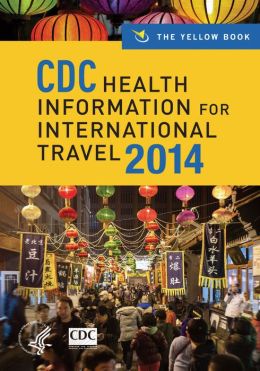 Updated edition of “ultimate guide for healthy travel” obscures the fact that Lyme is a world-wide concern.

The US Centers for Disease Control and Prevention has released the online version of the 2014 edition of CDC Health Information for International Travel, commonly known as the “Yellow Book.” Nicknamed for its yellow cover, the CDC calls this “the ultimate guide for healthy international travel.”

According to a press release, “The Yellow Book provides the latest official CDC recommendations to keep international travelers safe and healthy. It includes a complete catalog of travel-related diseases and up-to-date vaccine and booster recommendations.”

So, what does it say about Lyme disease?

Well, for starters, according to this book, Lyme disease is only a problem in the following parts of the world:

In Europe, endemic from southern Scandinavia into the northern Mediterranean countries of Italy, Spain, and Greece. Incidence is highest in central and Eastern European countries. In North America, highly endemic areas are the northeastern and north-central United States. Transmission has not been documented in the tropics. Lyme disease is rarely reported in returning travelers.

It’s unclear whether the CDC reference to Europe includes the United Kingdom, where  plenty of Lyme disease has been reported. Or Ireland.

What about Canada? Nah. What about Australia? Nah, the Aussie government says you can’t catch Lyme there (even though their citizens are suffering–and even dying from it).

I know of people who have caught Lyme and other tick-borne diseases in Thailand, Africa, Russia, Japan. The list goes on.

And what’s with this statement? “Lyme disease is rarely reported in returning travelers.”

The CDC has trouble accurately reporting cases of Lyme in people right here in the endemic US. They honestly want us to believe they’re keeping track of whether any of those people traveled to foreign countries?

Two interesting bits of information in the paragraph on diagnosis. The CDC says, “Observation of an EM rash with a history of recent travel to an endemic area (with or without history of tick bite) is sufficient.” (That’s a message that goes unheard by many doctors in US.) Especially in California, where if you show an EM rash to a doctor you’re likely to be told, “It can’t be Lyme disease, because there’s no Lyme in this state.”

The Yellow Book does state that standard US testing may not detect infection with European species of Borrelia. An interesting thought that deserves elaboration, though none is offered. Maybe a clue to why “Lyme disease is rarely reported in returning travelers”?

The Yellow Book can be purchased in hard copy from retailers like Amazon, or consulted free on-line at the CDC website. I can’t speak to what it says about risks of other illnesses. But when it come to Lyme disease, the CDC continues to play its dangerous game of Lyme denialism.