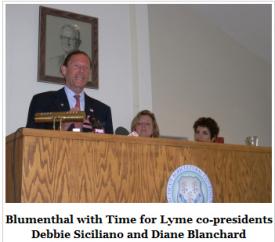 Blumenthal's bill would create a tick-borne disease advisory committee to streamline coordination between federal agencies and private organizations that address tick-borne illnesses. It also calls for the development of more accurate and time-sensitive diagnostic tools to improve surveillance and reporting of tick-borne illnesses to determine their prevalence.

It would create a physician-education program on Lyme-related research that includes "the full spectrum of scientific research," and increase public education through the Centers for Disease Control, and require the secretary of the U.S. Department of Health and Human Services to regularly evaluate guidelines and research on Lyme disease to educate health professionals and to report to Congress.

The Lyme and Tick-Borne Disease Prevention, Education, and Research Act would:

Establish a Tick-Borne Disease Advisory Committee: The legislation would establish the Advisory Committee through the Secretary of Health and Human Services in order to streamline coordination between other federal agencies and private organizations addressing tick-borne illnesses. The Advisory Committee would be comprised of “stakeholder constituencies,” which would include doctors and researchers.

Coordinate Increased Research and Development Around Lyme Disease: The legislation directs the Secretary of HHS, in coordination with the Advisory Committee, to develop more accurate and time-sensitive diagnostic tools to strengthen surveillance and reporting of Lyme and other tick-borne illnesses, which would help determine prevalence of various illnesses.

Increase Education: The legislation would increase public education through the Community Based Education Programs at the Centers for Disease Control and create a physician-education program that includes the full spectrum of scientific research related to Lyme and other tick-borne disease.

Report on Lyme Disease: The legislation requires the Secretary of HHS to publish a report at the end of each advisory term evaluating published guidelines and current research available on Lyme disease, in order to best educate health professionals on the latest research and diversity of treatment options. It further requires the Secretary of HHS to submit to Congress a report on the activities carried out under this act including a copy of the most recent annual report issued by the Tick-Borne Diseases Advisory Committee.