NEWS: "Are we missing most cases of Lyme disease in Alabama?" 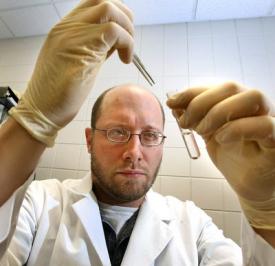 Some believe the standard Lyme test doesn’t work in Alabama because it uses a strain of Borrelia burgdorferi –- the spirochete known to cause Lyme disease in the Northeast –- from New York, which doesn’t match the Southern strain, B.lonestari.

.
.
From the Anniston Star:
Are we missing most cases of Lyme disease in Alabama?
by Jason Bacaj
jbacaj@annistonstar.com Anniston Star
Oct 26, 2010
Ticks crawled all over Damien Willis during the year he dragged a nine-square-foot white cloth through the leaf litter around Coleman Lake.

Willis was collecting ticks for a study on how forest fires impact population levels and the presence of the bacterium suspected to cause Lyme disease in the South.

“It would blow your mind how well it works,” Willis said about the cloth’s effectiveness at harvesting ticks.

He swooped up 485 ticks with the cloth, finding that tick populations rebounded two years after a burn. He also found himself with Lyme disease.

“There’s no doubt. I was getting covered in larval ticks, sometimes a couple hundred on me at one time,” Willis said. “As soon as I started showing symptoms I knew what it was.”

But Willis never tested positive for Lyme disease, because doctors in Alabama rarely perform the test due the fact that it almost never tests positive.