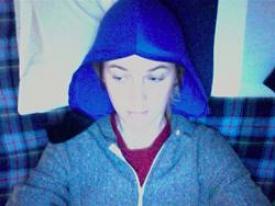 Colby Lenz is a remarkable 33-year-old woman in San Francisco who spends a lot of time wearing a funny blue hat. Why, you ask? It’s an ice pack, to help cool her Lyme-inflamed brain, which is getting too big for her skull. Sometimes the ice takes a bit of the edge off the battering ram of pain in her head. Mostly it doesn’t. Sometimes the heavy duty drugs she takes allow her brief respite from the on-going agony. Mostly they don’t.

And yet somehow, through it all, Colby Lenz prevails.

Her Lyme story starts out like many others: she never saw the tick that bit her in 2008, giving her both Lyme disease and babesiosis. Soon she was battling a wide array of debilitating symptoms. Most notably, intractable pain in her head, her neck, and other parts of her body.

But now her story takes a different turn. She has also been diagnosed with a condition called chiari malformation, where brain tissue protrudes into the spinal canal. Her neurosurgeon says it’s one of the most serious cases of chiari he’s seen. It’s constricting her brain stem. She’s scheduled for surgery on November 1, to open up her skull to make more space for the brain.

More extraordinary is how Colby is choosing to spend her time between now and her surgery. Within the last few weeks, she has become the top individual fundraiser for the 2010 CALDA Lymewalks, which are raising money for Lyme disease research. As of this writing, she’s raised over $2700 on her fundraising page, much of it by relatively modest donations of $20, $30 or $50. And the momentum is building. (Update: as of 9/29/10, she’s raised $6142.)

Donations are streaming in from family, friends, her co-workers at the Arizmendi Bakery (a worker-owned cooperative near Golden Gate Park), even from customers at the bakery. (Where a Lyme-awareness donation jar is in place.)

For most of her life, Colby says, she has supported the concept of people banding together to accomplish good things. Back in New York, she organized on behalf of the homeless. In San Francisco, before her illness, she worked at the cooperative bakery, and volunteered with homeless youth, ex-prisoners, and abused women. Now, she has a new cause: to bring about more recognition, prevention and treatment for people with Lyme disease.

The 2010 CALDA Lymewalks are a series of six events sponsored by the California Lyme Disease Association, to increase awareness of the tick-borne illness and raise money for Lyme disease research. San Francisco’s Lymewalk will be Sunday, September 26, near the Main Library.

Colby will be unable to attend in person. But she says it lifts her spirits that so many people support her in her fundraising efforts. She recently wrote on her blog:

Sometimes it feels like the beast within is trying to find more ways to prove it’s bigger, stronger, more resistant…But it won’t win.