NEWS: Former skateboader with Lyme finds help with stem cell treatment in India; musician friends step up to help him pay for it 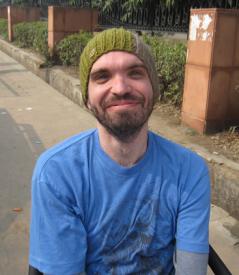 When Gavin Peters, a well-known skateboarding sensation in the 1990s, became mysteriously debilitated in 1997, he was diagnosed and treated for MS, which just made him substantially worse. In 2005, he was found to actually have Lyme, but none of the treatments seemed to help. Until he tried stem-cell therapy in India.

From the Ventura County Reporter:

So what exactly is it about Gavin Peters that’s eliciting such big love? Peters, who lives in Ojai and was once a key figure at Skate Street skate park before it closed, is what Dalton describes as an “integral part of Ventura’s skateboarding and art scenes.” Sometime in 1997, a very fit and vibrant Peters began experiencing vision problems. Soon his muscle coordination began to suffer, and he would fall for no apparent reason. He bought a cane. He became fatigued and symptoms progressed, but doctors were at a loss to determine what was ailing him. Finally, in 2003, he was diagnosed with multiple sclerosis and then, in 2005, a costly blood test revealed Lyme disease, an infectious bacterial disease that is spread by ticks. There has been some controversy over Lyme diagnoses in the West, as it’s been thought to be limited to a type of tick that lives in the northeast U.S. But, as an increasing number of people in this neck of the woods are testing positive, that theory is losing ground.

Before Peters received the diagnosis, doctors attempted to treat his MS with immuno-suppressive drugs, which unfortunately allowed the Lyme bacteria to flourish in his weakened body. “It’s like I fell into a deep hole — it will take a while to get out of it,” he says.

The bad news is that Peters is now confined to a wheelchair, unable to work. It’s been a long while since he rode a skateboard. The good news is that he has an uncrushable spirit, an unstoppable support network and a potential cure.