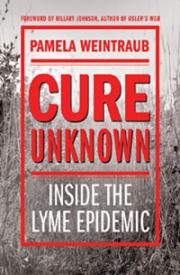 In the chaotic early days of my daughter’s illness, when we trying to make sense of her bizarre symptoms and the equally bizarre reactions we were getting from the medical establishment, I didn’t want to read about the history and controversy surrounding Lyme disease. I just wanted somebody to figure out what was wrong with her and fix it.

You’ll often find the same response from “newbies” in the online support groups. “Don’t give me a history lesson. Just tell me how to get well.”

When people develop cancer or diabetes or any number of other conditions, they don’t have to read a book about the history of the disease in order to find appropriate treatment. Unfortunately, Lyme disease is a whole ’nother ballgame. With Lyme disease, you will never understand what you are up against if you don’t educate yourself about the convoluted history of this complex illness.

Luckily, science journalist Pamela Weintraub has done the heavy lifting for us in Cure Unknown: Inside the Lyme Epidemic (St. Martin’s Press, 2008). The book starts with Weintraub’s personal story. In the early 1990s, she and her family moved to a seemingly idyllic, wooded neighborhood in suburban New York. Before long, they fell ill with a laundry list of perplexing symptoms: pounding headaches, painfully swollen knee joints, violent mood swings, limbs that felt like they were being jolted by electrical shocks, crushing fatigue.

Eventually, the Weintraubs would learn they’d caught Lyme disease from infected ticks in those beautiful woods outside their doorstep. But that determination came only after a forced march through a medical labyrinth that erected barriers to proper diagnosis and treatment at every turn.

For, although early treatment is a Lyme patient’s best shot at getting well, what Weintraub – and my own family – found out is that the system is rigged against timely diagnosis. If you are unlucky enough to fall outside of an arbitrarily strict definition of Lyme, if you fail to test positive on a primitive lab test that’s known to be unreliable, you are denied treatment.

Fortunately for Weintraub, she found a doctor willing to treat her against the recommendations of mainstream medicine. Otherwise, she likely would have remained too debilitated to accomplish the hard-hitting investigative journalism of Cure Unknown. In it, she digs deeply into the history, science, personalities and financial dealings of Lyme disease.

Two distinct sides have emerged in what have aptly been called “The Lyme Wars.” Camp 1, which controls much of the research and official discussion of Lyme disease, has produced highly restrictive Lyme treatment guidelines that have been adopted by the Centers for Disease Control and Prevention and most insurance companies. Camp 1 has a stranglehold on how Lyme is defined and treated. Doctors who buck the status quo can face grave consequences. And patients who do not improve after the two-to-four weeks of treatment the guidelines permit are essentially booted out of the system.

Camp 2 consists of Lyme patients themselves, and a group of doctors who recognize the limitations of mainstream medicine’s response to Lyme and go beyond its narrow strictures. The Lyme treatment of choice for these doctors is often long-term antibiotics, which is anathema to Camp 1. Camp 2’s doctors are demonized by the establishment, and some have even lost their licenses for treating outside the Lyme guidelines. Yet, these mavericks have a good track record of improving the health of Lyme sufferers who have otherwise been abandoned by the medical system.

Cure Unknown is a tale of biological complexities, scientific turf battles, political intrigue, human egos and money – lots of it. And it is the interplay of all of those elements that make Lyme such a strange landscape to navigate. The political machinations of Lyme continue to this day. If you or a family member has Lyme disease, Cure Unknown is essential reading.

(A version of this article previously ran in the Sacramento Bee.)

TOUCHED BY LYME is written by Dorothy Kupcha Leland.