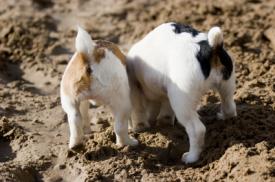 You’ve all heard that the latest drum-roll from the rheumatologists at the IDSA hearing was essentially to say that Lyme patients have persistent symptoms and they started off with infection, but now we don’t “believe” in persistence—so what do you call it? How about “medically unexplained symptoms” or MUS for short? All of this seems to regard the real problem with Lyme disease as being what you call it. But patients know the real problem with Lyme disease is how you treat it, how you cure it, how you restore patients to their lives. Disease definitions like MUS are for drug-makers who sell drugs to a market, physicians trying to claim professional turf, and insurers trying to deny treatment reimbursement. They are not for patients. Abraham Lincoln had it right when he said: “How many legs does a dog have if you call the tail a leg? (Answer) Four. Calling a tail a leg doesn't make it a leg.” I’m not the only one who finds these acronyms aggravating and unhelpful. A post from the internet nails it:

If someone knows the author let me know so that I can give proper credit:

“Physicians fixated upon the metaphysical belief system of “If we don’t know about it, then it doesn’t exist” are suffering from a mental defect or psychological condition known as “Doctors with Unexplained Medical Beliefs”:  D.U.M.B. DUMB doctors are comprised of subgroups characterized by opportunists who are feigning to be DUMB for monetary gain:

“Medicalingering” or of those doctors who are not in possession of sufficient information to render an intelligent diagnosis: “Factlessitious Disorder”. Physicians who are suffering from DUMB disorder place an inordinate emphasis on theories of psychological causality for virtually any unfamiliar complaints that are presented, and manifest a distinctive lack of observational skills when confronted with obvious abnormalities. Doctors who exhibit obsessive preoccupation with psychosocial etiologies should be regarded with extreme caution: “Psychosomatization Fixation Disorder” or “Psychologizing” is a distinctive characteristic of mental illness, and should be considered a warning sign that the individual is not rational and may in fact be dangerously DUMB.

DUMB disorder may be concomitant but should not be confused with Signs of Thoroughly Unmistakable Physician Intelligence Deficiency: “S.T.U.P.I.D.”, as a STUPID physician is uniformly incompetent, while a DUMB doctor is only mentally paralyzed into “psychologizing” by unfamiliar symptoms and complaints.”