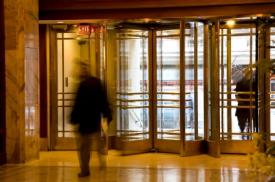 Have you ever heard the saying “what goes around, comes around”? How about “you scratch my back, I’ll scratch yours”. The revolving door between government and industry is cause for concern. The revolving door between the CDC and the vaccine industry is even greater cause for concern. The most recent revolving door has Dr. Julie Gerberding, the first woman to head the Centers for Disease Control and Prevention, being named president of Merck’s vaccine division. Do you think she knows a thing or two about vaccines and how to get them through the process? Do you think she has connections? Dr. Gerberding comes from an infectious disease background.

The CDC’s management of conflicts of interest on the ACIP—that is the Advisory Committee on Immunization Practices has come under fire.  The ACIP together with two other medical specialty societies, the American Academy of Pediatrics and the American Association of Family Physicians determine which vaccines go on the recommended vaccine schedule for children’s vaccines.  Inclusion on this list can make or break the market for a vaccine.  The IDSA recommends vaccines as well and key opinion leaders for the vaccine industry head the research list for these vaccines.


People in the Lyme disease community know that conflicts of interest were a big issue in the Lyme vaccine.  We also know that the narrow disease definitions that suited the vaccine trials the best hurt patients by denying and delaying diagnosis to patients with Lyme.  The issue is not a new one unfortunately.  Here’s an excerpt on the role that conflicts of interest played in the Rotavirus vaccine, that was ultimately pulled from the market after causing infant deaths: “The CDC’s policy of issuing annual waivers creates an environment where people do not take the conflict of interest issue as seriously as they should. This policy, in concert with sloppy monitoring of the completeness of members’ financial disclosure statements, allows for a clubby environment where ethical concerns are downplayed”.   (For full details see the Majority Staff Report Committee on Government Reform U.S. House of Representatives August 21, 2000.)

I think the use of the word “clubby” is appropriate.  The CDC is overly clubby with the vaccine manufacturers and with the medical societies that focus on vaccines.  Its posting of the IDSA guidelines on the CDC website despite the considerable controversy over these guidelines and the damage they do to patients is a case in point.  Overly clubby.  Yeah, that about sums it up.

You can contact Lorraine Johnson, JD, MBA at lbjohnson@lymedisease.org with questions or comments.