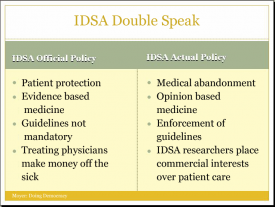 Have you ever noticed how the IDSA says one thing, but really means and does another? For instance, how they say that their guidelines are there to protect patients when in fact they amount to medical abandonment? They are so stringent that sick patients are left completely without treatment options? Or how they say they are all about scientific evidence when in fact their guidelines are based primarily on expert opinion–the expert opinion of researchers with commercial ties to vaccine manufacturers, Lyme tests, and insurers? Or how they say their guidelines are not mandatory, but their members enforce their guidelines by testifying at unprofessional conduct hearings and the IDSA opposes physician protection legislation that would essentially make compliance with their guidelines truly voluntary? Or how they say they are worried about doctors who treat chronic Lyme making money off of sick patients, but they are not concerned about conflict of interest on their guidelines panels? This is called double speak. Saying one thing, doing another. George Orwell described this type of practice "newspeak"–words "deliberately constructed for political purposes: words, that is to say, which not only had in every case a political implication, but were intended to impose a desirable mental attitude upon the person using them." I'd say we could all use a little more plain talk.