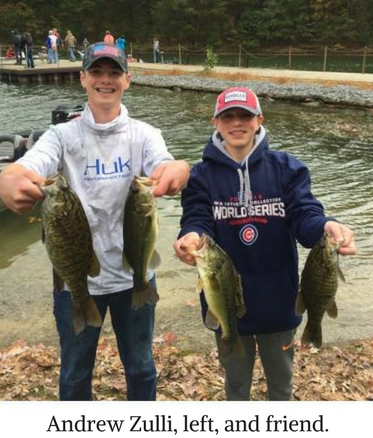 On a recent Saturday morning, an hour before the crack of dawn, my 16-year-old son, Andrew and his fishing buddy/teammate climbed into a bass boat. Driven by his father, they crossed the dark waters of Raystown Lake, heading to the bass fishing high school state championship.

At 7 am, the high school teams in their boats were released to compete. I watched the parade of bass boats move past the cove where our houseboat was anchored. A Golden Eagle circled overhead….really.

What a change this has been since he was first bitten by a tick seven years ago! Andrew was first diagnosed with Lyme in fourth grade. My husband and I were unaware of the potential for any long-term consequences. The common position, within our community and circle of peers, was that Lyme was an insignificant illness. We heard it was easily treated and that even without treatment a person’s immune system would fight it off–like the flu.

At his pediatrician’s, he was quickly diagnosed because he had a decisive bull’s-eye rash. No one mentioned the possibility of co-infections during that appointment. Unfortunately, the treatment was just 21 days on amoxicillin.

Fourth grade is the year children in our district memorize the multiplication tables. It was a difficult task for him, and Andrew would get frustrated. A middle school science teacher at the time, I used every trick in the book to help him memorize, eventually slowing it down from mnemonic devices to simple flashcards.

Andrew struggled immensely to get them into long-term memory. However, we kept at it and he eventually got it. Yet, from that point on, his grades and school took a sharp turn from pleasure to pain. Thankfully, my careers and background prepared me to help him stay mostly positive about himself. I had no idea at the time that the cause of his memory issues and increasing emotional angst could be related to that bull’s-eye rash.

In sixth grade, he began having asthma attacks while playing sports. We took him to doctors, but in their offices, he always tested normal. Finally, one doctor gave him an inhaler to use before he exerted himself. Miraculously, he had no more terrifying episodes of not being able to breathe.

Case closed, or so I thought.

We had no idea at the time there was such a thing as a co-infection called Babesia. The following years brought new troublesome clues about Andrew’s underlying health problems, too many to mention here.

Finally, just this year, he was diagnosed with Lyme and co-infections and began treatment. He has refused to let this fight change the purpose of his life. He stays positive. He has our support. He knows we understand what he is going through because both parents and one of his siblings are also fighting Lyme and coinfections that had been long unrecognized.

In fact, if I hadn’t finally been diagnosed with Lyme, I often wonder if I ever would have connected Andrew’s dots.

About ten years ago, I went to a prominent teaching hospital after both sides of my face drooped. I was diagnosed with Bell’s palsy, and sent home with oral steroids and a note to follow up with my primary care doctor.

Over the following years, I experienced strange health issues that would come and go. I reached out to various experts, but no one could help me. None of the medical professionals I encountered seemed interested in getting to the bottom of my health problems.

As it happened, a friend of mine got very sick and then was quickly diagnosed with Lyme and co-infections by a Lyme-literate doctor. She thought that my symptoms matched Lyme. I grudgingly made an appointment. The doctor took me seriously and ordered some crazy expensive blood work. Ultimately, I was diagnosed with the 3 B’s: Borrelia, Bartonella and Babesia.

The knowledge I gained led to my middle son and my husband both getting diagnosed as well. A story for another day.

Our family is now aware of the significant, long -term, health consequences that tiny ticks can carry within their bites. I am thankful to finally know what to fight. We are grateful to the Lyme-literate doctors who have given us hope.

We have been providing Lyme awareness throughout our community, feeling that it is our duty to pass on what we have learned. I am happy to say that bottles of permethrin have been sold out in local stores! Many within our community have told me they have tried to purchase it at local stores only to be informed they were out of stock. This did not deter those newly informed peers, who simply ordered it online. Awareness makes a ball game!

Andrew and his teammate Jack were one of thirty-five teams in the Bass championship. Raystown Lake is so difficult to fish, it has seen professionals throw in the towel and not compete there. Many of the high school teams didn’t catch any fish that Saturday. A handful of teams caught the 5 limit to be weighed for the highest weight. Andrew and Jack placed third.

Andrew is motivated by the thought that as he gets better from Lyme and its co-infections, so will his fishing. While proud to rank third in the state, he is already talking about next year and becoming number one.

I, myself, am off to learn more next week at a conference concerning the link between Lyme and mental health. Thankfully, our local school has already asked me to share what I learn. They want to support my family and any other students facing a Lyme and co-infection diagnosis. There is HOPE!

Jackie Zulli and her family live in Pennsylvania.