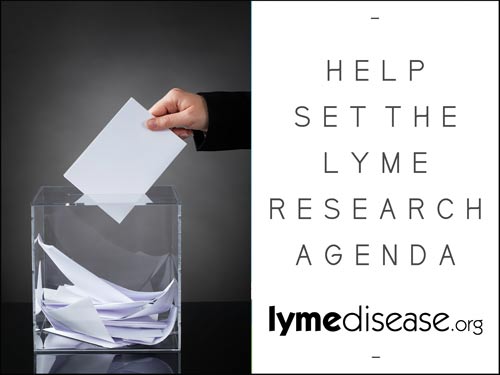 The nation’s top research priority for Lyme disease should be finding a more accurate and sensitive diagnostic test.

That’s the conclusion of a broad-based collaboration of researchers, treating physicians, and Lyme disease patients in the United States, who took part in a comprehensive priority-setting process over the past two years.

Other priorities for Lyme research identified by the group include finding more effective treatments for both early and late stages of the disease, and determining why some patients develop a chronic form of the illness.

Lyme disease, a bacterial infection transmitted by the bite of a tick, can be difficult to diagnose and treat. Furthermore, many patients diagnosed with Lyme disease remain ill after treatment, while others improve.

According to CEO Lorraine Johnson, lab testing for Lyme disease is unreliable, making it difficult for patients to get appropriately diagnosed.

She also said there has been very little research into treatment options for those who remain ill after initial therapy.

“People with Lyme disease have the most at stake here. Yet they have traditionally had little or no say about where researchers choose to focus their efforts,” said Johnson.

“We undertook this broad and inclusive process to include patients in setting the research priorities for Lyme disease.”

Between 2015 and 2017, LymeDisease.org completed a three-step process based loosely on the one developed by the prestigious James Lind Alliance to define national research priorities.

The first round of priority setting took place at a 2015 conference held by the American Association for the Advancement of Science. At that forum, 50 physicians, researchers, and patients developed a list of high priority questions for Lyme disease.

Then, LymeDisease.org invited participants of the MyLymeData patient registry to rank the priorities established at the AAAS conference, and to submit additional questions as well. This became the second list.

Next, the organization surveyed more than 5,000 members of the Lyme community at large. They were asked to rank the second list, and thus establish the final list of top ten research priorities.

Over 7,000 patients, researchers, physicians, and advocacy groups participated in the process, which will be used to influence research agendas—particularly for government-funded research.

According to LymeDisease.org President Phyllis Mervine, “The ultimate goal is to ensure that research that matters to patients is funded. Identifying key areas of focus for Lyme disease should help promote research that addresses patient needs and improves care.”

Release of “The Top 10 Research Priorities” comes as the US Department of Health and Human Services (HHS) has recently named a new federal advisory panel for tick-borne diseases. Its first meeting was yesterday in Washington DC. Another meeting will be held today.

About MyLymeData: MyLymeData is the third largest national patient registry in the United States, with nearly 10,000 people either personally affected or parents of children with tick-borne diseases. It is a patient-driven big data project that tracks patients’ progress over time. Additional information can be found on our website.