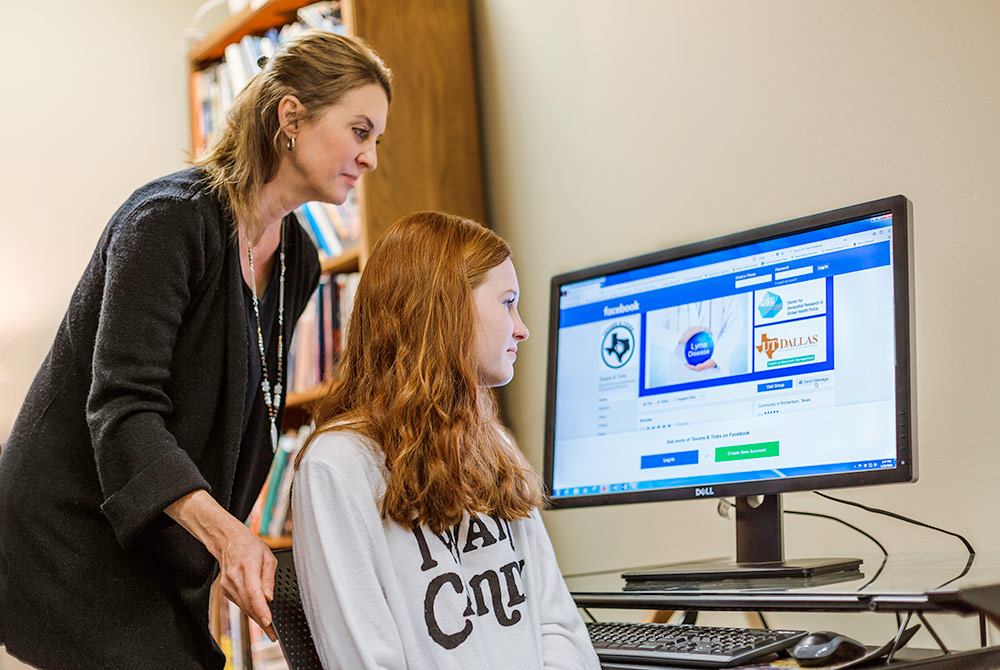 Press release from the University of Texas at Dallas, March 1, 2018

Dr. Sarah Maxwell took her two daughters to doctor after doctor to find out what was causing their extreme fatigue, joint pain, memory problems and flu-like symptoms. For two years, their illnesses remained a mystery.

“I kept saying, ‘Something’s wrong,’” said Maxwell, professor of public and nonprofit management in the School of Economic, Political and Policy Sciences at The University of Texas at Dallas. “We had some really frustrating experiences.”

Katharine, 18, and Claire, 16, went from competing in triathlons to missing months of school because they were so ill. Finally, they were diagnosed with Lyme disease, which is caused by the bacterium Borrelia burgdorferi transmitted through the bite of infected blacklegged ticks, according to the Centers for Disease Control and Prevention.

Katharine and Claire have now recovered, but after her daughters faced many misdiagnoses, Maxwell launched a social media campaign — Texans & Ticks — to raise awareness about the prevalence of the disease in North Texas. Though the disease is most prevalent in the Northeast, an increasing number of cases have been reported in recent years in other parts of the country, including North Texas.

Maxwell, who is not a medical practitioner, conducts academic research on social media use and engagement among nonprofit organizations. This is the first time that she has led a social media campaign. She said her goal is to create a dialogue with those who come to the site.

“Lyme disease can easily be overlooked because the symptoms are very nonspecific and mimic other illnesses, like the flu,” said Maxwell, who believes her daughters were infected when the family’s three dogs brought ticks into their house from the backyard.

“We hope this grant-funded project will trigger doctors to ask their patients questions about exposure to ticks, unusual rashes, or other symptoms as they make their diagnosis.”

Maxwell received a research grant from the Jackson, New Jersey-based Lyme Disease Association to support the project, which she is working on in conjunction with UT Dallas’ Center for Geospatial Research in Global Health Policy.

The Texans & Ticks Facebook page redistributes official information about Lyme disease and prevention strategies such as wearing long pants outdoors, using bug spray, checking for ticks and putting clothes in a hot dryer after being outside. As part of the project, Maxwell will evaluate how many visitors access the site and how they engage with the information provided.

“We expect that the findings will provide guidance to public health policymakers on promoting more attention and allocating resources to this disease,” said Kim, director of the geospatial research center at UT Dallas.

Claire, a high school sophomore, and some of her fellow students serve as volunteers for the public awareness project. The group recently met to learn more about the microbiology of Lyme from Ali Tejani BS’16, a McDermott Scholar who is a medical student at The University of Texas at Southwestern Medical Center, and Sanna Tejani, a biology senior who also is a McDermott Scholar. The brother and sister also talked to the group about getting into medical school.

“I am happy to work on the Texans & Ticks project because I could have been diagnosed years earlier,” she said. “I had been feeling tired and run down for a long time, then the fevers started, and from there I had extreme fatigue, headaches, neck pain and backaches. We want to reach as many doctors as possible so kids don’t miss their childhood over a tick bite.”