TOUCHED BY LYME: “Kingdom of the sick” is a stark place, indeed 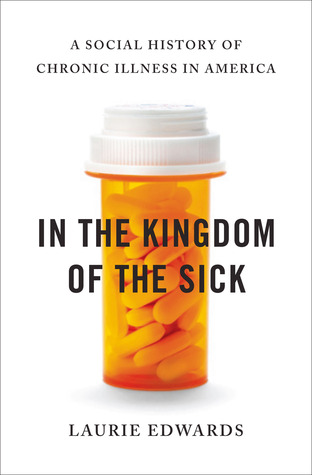 Book review of “In the Kingdom of the Sick: A Social History of Chronic Illness in America,” by Laurie Edwards.

About 30 years ago, in her book “Illness as Metaphor,” the noted writer Susan Sontag said: “Everyone who is born holds dual citizenship, in the kingdom of the well and in the kingdom of the sick…. Sooner or later each of us is obliged, at least for a spell, to identify ourselves as citizens of that other place.”

Author Laurie Edwards, who has been chronically ill most of her life, is intimately acquainted with being a citizen of “that other place.” She uses Sontag’s famous quote as a jumping off point for her new book, “In the Kingdom of the Sick: A social history of chronic illness in America.”

Although the author’s personal experiences (with celiac disease and a genetic lung disorder) are interwoven throughout, the book mostly takes a “big picture” look at how chronic illness is viewed in our society. More than 130 million Americans now live with such conditions as HIV, various cancers, diabetes, autoimmune disorders, chronic fatigue, asthma, and Lyme disease. Most of the healthcare dollars spent in the US go for the treatment of chronic illness. Yet many of the chronically ill are viewed with mistrust by doctors and the public at large. Either their largely invisible symptoms are disbelieved entirely (such as with CFS or Lyme) or they are blamed as being the cause of their own illness due to perceived lifestyle choices (HIV and type-2 diabetes).

“In the Kingdom of the Sick” examines the rise of the disability rights movement, AIDS activism, the women’s health movement (with its emphasis on breast cancer awareness), gender bias in the treatment of pain, and patient activism in the digital age. The book reports on academic research as well as the stories of individual patients from across the spectrum of chronic illness.

Edwards devotes much of a chapter to Lyme disease and its controversies, featuring comments from Lyme patient/advocate Jennifer Crystal (whose guest blogs are sometimes published in this column.) That leads into a section on the rise of patient communities, largely made possible by the growth of the internet. Edwards writes: “The possibilities that present themselves when patients not only have access to health information but access to each other and a vehicle through which they can organize are powerful.”

Yet Edwards points out that such power is often fragmented. “There are so many different diseases under the umbrella term ‘chronic illness,’ and we don’t often want to align ourselves with other patients, especially those who may have acquired their disease differently….We need different trials, different breakthroughs, and different methods to meet the requirements of our disparate diseases….If you are arguing not only over the treatment of the disease but also over its cause, you are fighting on several fronts at once.”

Although the author notes the progress made by some health activists (especially in matters related to AIDS and breast cancer), the book’s ultimate conclusions are not necessarily hopeful. “Our understanding of disease and how it spreads has certainly evolved, but…have we failed to evolve when it comes to perceptions of illness?” At a time when soaring health care costs are taking a significant toll on the US economy and arguments about the Affordable Care Act play out on the national stage, those perceptions are critically important. They help shape how much we as a society are willing to pay for research and treatment of expensive chronic conditions.

Click here to read my review of Edwards’ 2008 book, “Life Disrupted: Getting Real about Chronic Illness in Your Twenties and Thirties.”