NEWS: Predicting who gets long-term complications from Lyme disease 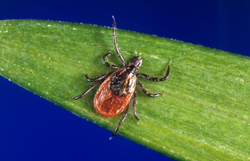 A team of scientists led by Johns Hopkins and Stanford University researchers has laid the groundwork for understanding how variations in immune responses to Lyme disease can contribute to the many different outcomes of this bacterial infection seen in individual patients. A report on the work appears online April 16 in PLOS One.

“Physicians have recognized for many years that Lyme disease is not a uniform disease process and can vary in outcomes,” says Mark Soloski, Ph.D., a professor of medicine at the Johns Hopkins University School of Medicine and senior author of the report. “Our experiments have linked such differences to specific immune pathways controlled by elements of the immune system, which in turn might help us understand both the good immune processes that clear up the infection and the bad ones that cause injury and prolong symptoms. This could be a big step forward in managing this disease.”

Lyme disease is caused by the bacterium Borrelia burgdorferi, which is transmitted to humans through the bite of infected ticks. The U.S. Centers for Disease Control and Prevention estimates that there are 300,000 new cases of Lyme disease a year. Symptoms can include fever, headache, fatigue and a characteristic circular, red skin rash called erythema migrans, which occurs early in the disease.

Although treatment with antibiotics usually restores pre-infection health within a few weeks, some patients develop post-treatment Lyme disease syndrome, whose symptoms include fatigue, pain or joint and muscle aches that can last for several months. The exact cause is not well understood, and the symptoms are difficult to treat, the researchers say.

In a bid to identify why symptoms persist in some patients and not others, the Johns Hopkins team searched for the biological “signature” of the early stages of Lyme disease by measuring the levels of immune system molecules, called cytokines, chemokines and acute phase makers — proteins released by the liver as part of the process of inflammation. These molecules, which are also called mediators, orchestrate the complex interactions of the immune system response to infection, including inflammation.

Specifically, the team studied levels of 58 cytokines and chemokines plus seven acute phase markers in blood from 44 patients diagnosed with Lyme disease and 23 healthy people used as controls for comparison.

The team’s analysis identified two subsets of Lyme disease in patients in the acute (early) stage of infection — “mediator-high” and “mediator-low.”

The levels of three chemokines in particular — CXCL9, CXCL10 and CCL19 — were increased in the mediator-high group and returned to normal levels after antibiotic treatment and the disappearance of the rash. Chemokines are small signaling molecules that attach to specific sites, called receptors, on a certain type of immune cells. These three chemokines in particular guide a type of immune cell called T lymphocytes into tissues to aid in the clearance of infection. The movement of T cells from the bloodstream to the site of infection also contributes to inflammation, which can cause tissue injury, Soloski notes. There was also an increase in the acute phase proteins released by the liver, including CRP and serum amyloid A.

Individuals in the mediator-low group appear to represent Lyme disease patients who failed to mount a vigorous immune response, the researchers reported.

The results of the study indicate that the levels of chemokines in the blood and the levels of their specific receptors on the T cells they stimulate might prove to be important biomarkers for Lyme disease, and they could be linked to specific symptoms of the disease, Soloski says. Biomarkers are biological characteristics or molecules whose levels in the body or tissues can be measured to identify a specific biological state or condition (e.g., disease or response to therapy).

Although the study wasn’t specifically designed to learn about post-treatment Lyme disease syndrome, the authors speculate that the variations in the pattern of mediators they observed strongly influence whether particular patients will recover from Lyme disease or develop long-term post-treatment symptoms.

“This study gives us basic data that will help us look for evidence of prolonged inflammation after completion of therapy and might, in the long term, help us identify biomarkers that predict that a particular person will develop post-treatment Lyme disease syndrome,” Soloski says. “And since the chemokines that were elevated are key to the movement of T cells, blocking them might prevent them from moving into tissues and prolonging inflammation. This is one of the long-term aims of our work.”

John N. Aucott, M.D., of Johns Hopkins also contributed to the research, as well as researchers from the Lyme Disease Research Foundation and the Stanford University School of Medicine.