Her husband died from Lyme-related causes. Now she advocates for change. 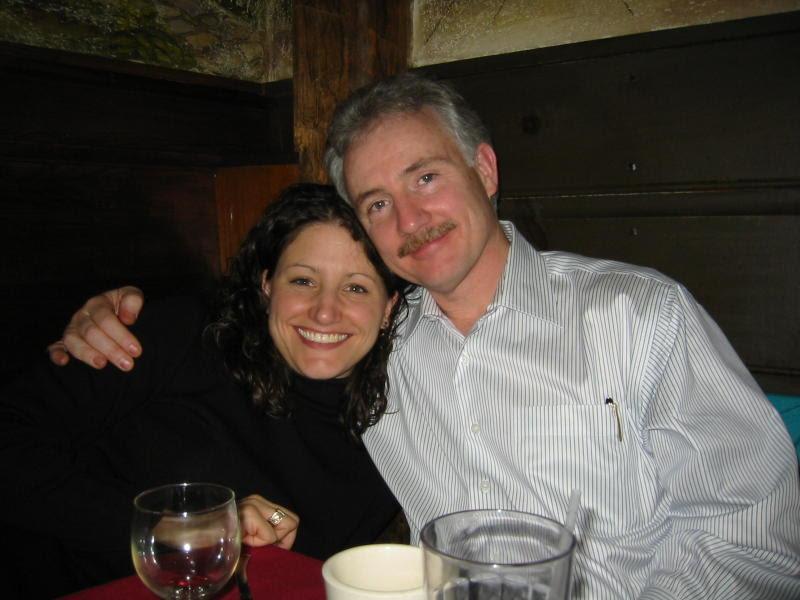 January 14th. The date loomed on my calendar like a dark rain cloud. One year since Russ died. One year since I watched him lying lifeless in that hospice bed, a broken shell of the captivating man he once was.

And to make matters worse, the new year brought more death to my social media feed. Two young men taken too soon from tick-borne illness – one aged 45 and one aged 31. The reality of Lyme disease came barreling back, a massive chronic tidal wave leaving millions – including my husband – in its wake.

Losing Russ first to dementia and then to death brought me to a dark place. His disease shattered everything I thought I knew, and the remaining pieces no longer fit. I knew I needed to pour my energy into driving change. To ensure that those infected in the future didn’t experience the chaos of the present.

So I returned to my engineering roots. Usually, when all seems lost, it’s time to step back and reanalyze the data. When Russ passed, I retired from my role as caregiver and returned to the discipline that always provided the answers I craved: science.

The first step was to cast a wide net and learn. Through a partnership with Lyme Warrior, I reached out to top researchers in the Lyme world. Pioneers in the space agreed to be interviewed and shared the knowledge they’ve gained through decades of studying tick-borne illness.

They explained the complexities and challenges of these elusive pathogens. I was also fortunate to connect with the Center for Lyme Action. They needed a writer for an educational paper on the state of Lyme disease research to raise awareness and hopefully more funding. A project to dig into the research and summarize it? Sign me up.

One year later, what have I learned? Well, I’d say that my research review has helped me answer two key questions that plagued me as a caregiver: 1) why is diagnosing Lyme so freaking hard, and 2) why are millions of Lyme patients still sick after treatment?

Why is it so hard to diagnose Lyme disease?


In my humble opinion, THE biggest problem in Lyme disease is the current standard of care in diagnostics. A systematic review of 13 different studies on the CDC-recommended two-tier test revealed 49-65% sensitivity across all stages of the disease. This means a person infected with the bacteria causing Lyme has a 35-51% chance of testing negative.

For those outside the Lyme world, this seems impossible. How can a diagnostic test be about as accurate as a coin flip? But those immersed in Lyme live this harsh reality. Russ tested negative on the two-tier test. Then, 15 months later, he tested positive with a different method. Unfortunately, in that time, his disease became entrenched.

The science behind these poor results is clear. The test looks for antibodies, which peak weeks after the initial infection. This makes the test inappropriate for the earliest stages of infection, precisely when it is the most treatable.

For those in the later, chronic stages of the infection, the immune system is often suppressed. Weak immune systems don’t produce the same antibody levels and can cause titers to be below detection limits, as was the case for Russ.

Finally, antibody testing is useless for those who have been diagnosed and treated but are still sick. Antibodies identify exposure to a pathogen but cannot establish whether the infection is active. The COVID-19 epidemic was a great crash course in infectious disease diagnostics. A patient will test positive for COVID-19 antibodies if they had the virus, but an antigen or PCR test is needed to determine if the patient has the virus right now.

As I learned with Russ, direct detection of the pathogen is a far better approach to diagnosis. Instead of looking for the immune system’s response to the pathogen, look for the pathogen itself. It makes perfect sense and is the approach the Infectious Disease Society of America prefers for most infectious diseases.

But for Borrelia burgdorferi, the bacteria causing Lyme disease, direct detection is more challenging than it sounds. Borrelia hides in tissues and is difficult to capture in a blood sample. The bacterial count has been reported to be as low as 0.1 per mL of blood. This is 3-4 orders of magnitude below the detection limits of conventional PCR.

At this concentration, the probability of detecting Borrelia in a blood sample with conventional PCR is about the same as the lifetime chance of getting struck by lightning. Read that again.

But science provides solutions. I read the research and mapped the Lyme diagnostic space and became encouraged. A small company called Galaxy Diagnostics has brought out the Lyme Borrelia Nanotrap® Antigen Test, which can detect Lyme in a urine sample. Borrelia colonizes in the bladder and releases proteins that are unique to the pathogen.

Using sample enrichment techniques, their assay can detect this protein and confirm infection in all stages of the disease, including those who have been treated. Published results show 100% sensitivity in early-stage patients with the characteristic Lyme rash, a dramatic improvement over the status quo.

Why are millions still sick after Lyme treatment?

But accurate detection is only one of the many problems in Lyme and tick-borne illness. Once a patient is diagnosed, the next big question is whether antibiotics can clear the infection. Herein lies a quagmire of scientific debate.

Fortunately, recent research has provided critical insight. And what does it say? Well, the good news is that if the infection is caught early, most patients will return to health. The bad news is that “most patients” means 56.8%. A prospective study out of Johns Hopkins University showed that out of 234 patients who were diagnosed and treated early, 56.8% returned to health. The remaining 43.2% experienced persistent symptoms. The coin flip analogy comes back to mind.

Of those with persistent symptoms, about two-thirds can return to normal functioning, and about one-third have an impaired quality of life. The latter group is defined as having Post-Treatment Lyme Disease or PTLD, a term that confused the heck out of me as I navigated Russ’s illness.

The question of persistence

So again, what does the research say? Definitive evidence in mice, dogs, and monkeys demonstrates that Borrelia persists after standard courses of antibiotics. Animal studies also demonstrate that these bacteria are metabolically active, implying they are not only present but potentially infectious.

Case studies in humans have also demonstrated the persistence of Borrelia after extended courses of antibiotics, with one notable study finding the bacteria in the spinal cord and brain. My take on this research is that persistent Borrelia is definitely a root cause of ongoing symptoms. But is it the only one?

Answering that question takes us back to the diagnostics challenge. Clinicians need a way to assess whether a patient has an active infection. A study using the Nanotrap® Antigen test on 100 patients under surveillance for persistent Lyme revealed that 41% were positive for the Borrelia antigen.

This suggests that persistent Borrelia is the cause of some, but not all, of persistent Lyme cases. Other proposed theories for ongoing symptoms include co-infections, infection-induced immune dysfunction, and inflammation due to bacterial debris. It’s chronic disease – I guess I’m not surprised that the answer is, “It’s complicated.”

But what is the most important thing I’ve learned?

Ironically, the most important thing I have learned in my studies has nothing to do with science. In the past year, I’ve had dozens of conversations with researchers striving to develop new diagnostics and therapies, philanthropists funding new approaches and studies, and advocates seeking to raise awareness and funds for this critical problem. In all those discussions, one theme rises to the top – the passion and drive of the Lyme community.

I’ve met the most determined group of people I’ve ever encountered in my 25+ year career. Each individual has their own story that makes them care deeply about Lyme. Each has harnessed their suffering and directed their unique talents to change the landscape for future patients. These passionate people have given me back what Lyme stole years ago. That thing, once beaten into submission, is now alive and strong and fueled by the energy of an army. That thing is hope.

So what can YOU do?

If you are reading this blog, you’ve probably been affected by Lyme in one way or another. With 500,000 new infections annually, most people will be impacted at some point in their lives. So what can you do to help? I would answer that question in two words: Demand better.

Demand better from your doctors. Don’t accept a test with 49-65% accuracy. Demand they use newer technologies tailored to find these elusive bacteria.

Demand better from Congress. Join the Lyme Fly-In in February to demand increases in research funding to prevent the needless loss of vitality and life.

Join the army with whatever unique capability and energy you have – even if it feels too small to make a difference. Because if we all demand better, the impact compounds, and then eventually, better will come.

Nicole Danielle Bell is the author of “What Lurks in the Woods: Struggle and Hope in the Midst of Chronic Illness.” She can be contacted via her website.  Click here to read our review and an excerpt of this gripping memoir.