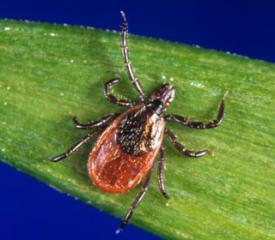 Researchers at the University of California, Davis, have found that Lyme bacteria "have developed a novel strategy for subverting the immune response of the animals they infect." Their study appears on-line in the journal Public Library of Science Biology.

The bacteria that cause Lyme disease, one of the most important emerging diseases in the United States, appear to hide out in the lymph nodes, triggering a significant immune response, but one that is not strong enough to rout the infection, report researchers at the University of California, Davis.

Results from this groundbreaking study involving mice may explain why some people experience repeated infections of Lyme disease. The study appears online in the journal Public Library of Science Biology.

“Our findings suggest for the first time that Borrelia burgdorferi, the bacteria that cause Lyme disease in people, dogs and wildlife, have developed a novel strategy for subverting the immune response of the animals they infect,” said Professor Nicole Baumgarth, an authority on immune responses at the UC Davis Center for Comparative Medicine.

“At first it seems counter intuitive that an infectious organism would choose to migrate to the lymph nodes where it would automatically trigger an immune response in the host animal,” Baumgarth said. “But B. burgdorferi have apparently struck an intricate balance that allows the bacteria to both provoke and elude the animal’s immune response.”

Lyme disease, the most important tick-borne disease in the United States is caused by Borrelia burgdorferi, corkscrew-shaped bacteria also known as spirochetes. The disease is transmitted to humans and animals through bites from infected deer ticks. The disease occurs mainly in the Northeastern and Great Lakes states, and is present to a lesser extent in Northern California.

Symptoms of Lyme disease are quite variable and may include fever, headache, fatigue and a skin rash. If the infection is not treated, it can spread to the joints, heart and nervous system.

Usually, Lyme disease can be successfully treated with about four weeks of antibiotics; treatment is most successful during the early stages of infection.

Swollen lymph nodes, or lymphadenopathy, is one of the hallmarks of Lyme disease, although it has been unclear why this occurs or how it affects the course of the disease. The UC Davis research team set out to explore in mice the mechanisms that cause the enlarged lymph nodes and to determine the nature of the resulting immune response.

They found that when mice were infected with B. burgdorferi, these live spirochetes accumulated in the animals’ lymph nodes. The lymph nodes responded with a strong, rapid accumulation of B cells, white blood cells that produce antibodies to fight infections. Also, the presence of B. burgdorferi caused the destruction of the distinct architecture of the lymph node that usually helps it to function normally.

While B cells accumulated in large numbers and made some specific antibodies against B. burgdorferi, they did not form “germinal centers,” structures that are needed for the generation of highly functional and long-lived antibody responses.

“Overall, these findings suggest that B. burgdorferi hinder the immune system from generating a response that is fully functional and that can persist and protect after repeat infections,” Baumgarth said. “Thus, the study might explain why people living in endemic areas can be repeatedly infected with these disease-causing spirochetes.”

In addition to Baumgarth, members of the UC Davis research team include Stephen Barthold, director of the Center for Comparative Medicine; Emir Hodzic, director of the Real-Time PCR Research and Diagnostics Core Facility; staff scientist Sunlian Feng; graduate student Christine Hastey; and Stefan Tunev, formerly of the Center for Comparative Medicine and now at Medtronic Inc.

Funding for the study was provided by the National Institute of Health.

For more than 100 years, UC Davis has engaged in teaching, research and public service that matter to California and transform the world. Located close to the state capital, UC Davis has more than 32,000 students, more than 2,500 faculty and more than 21,000 staff, an annual research budget that exceeds $678 million, a comprehensive health system and 13 specialized research centers. The university offers interdisciplinary graduate study and more than 100 undergraduate majors in four colleges — Agricultural and Environmental Sciences, Biological Sciences, Engineering, and Letters and Science. It also houses six professional schools — Education, Law, Management, Medicine, Veterinary Medicine and the Betty Irene Moore School of Nursing.