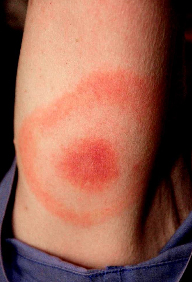 Image courtesy of the Centers for Disease Control

Early Lyme disease may feel like the flu: fever, sore muscles, headache and fatigue. Some people may develop a highly distinctive rash, which may look like a bull’s-eye. However, many people with Lyme never knew they were bitten and never developed a rash.

The CDC reports that rashes occur in 60-80% of cases. However, the true incidence of rash is unknown because no definitive studies on humans have been done. (It wouldn’t be ethical to infect people with Lyme just to see if they develop a rash.) In LymeDisease.org’s survey of 3000 patients with chronic Lyme, 40% reported a rash. Most of the time the rash is an ordinary red area; however if it is a “bull’s-eye” shape with a darker edge, it is a definite sign of Lyme disease and needs immediate treatment.

Unfortunately this distinctive rash occurs in less than 10% of those who contract Lyme disease. (Smith, 2002) When present, the Lyme rash is more likely to be diffuse.

It starts a few days or even several weeks after the bite and then expands over a period of days or weeks to several inches across, perhaps with a central clearing. Untreated, it can last for weeks before fading, or it may fade and recur. The rash may have an irregular shape, blistering or a scabby appearance. Some rashes look like a bruise. Lyme rashes may resemble spider bites, ringworm, or cellulitis. Multiple, so-called “satellite” rashes may appear on different parts of the body.

If you develop a rash, take a photo of it and see a doctor as soon as possible. Other symptoms of early Lyme disease may include a fever, headache, fatigue, or muscle aches.

Unfortunately, diagnostic testing is unreliable in the early stages of infection, often giving false negatives. Treatment should not be delayed pending a positive test result if the suspicion of Lyme disease is high (exposure, tick bite, possible rash).

LymeDisease.org has developed a Lyme disease symptom checklist to help you document your and your children’s exposure to Lyme disease and common symptoms for your healthcare provider. You will receive a report that you can print out and take with you to your next doctor’s appointment.