Patient lawsuit against IDSA and insurers moves forward in Texas 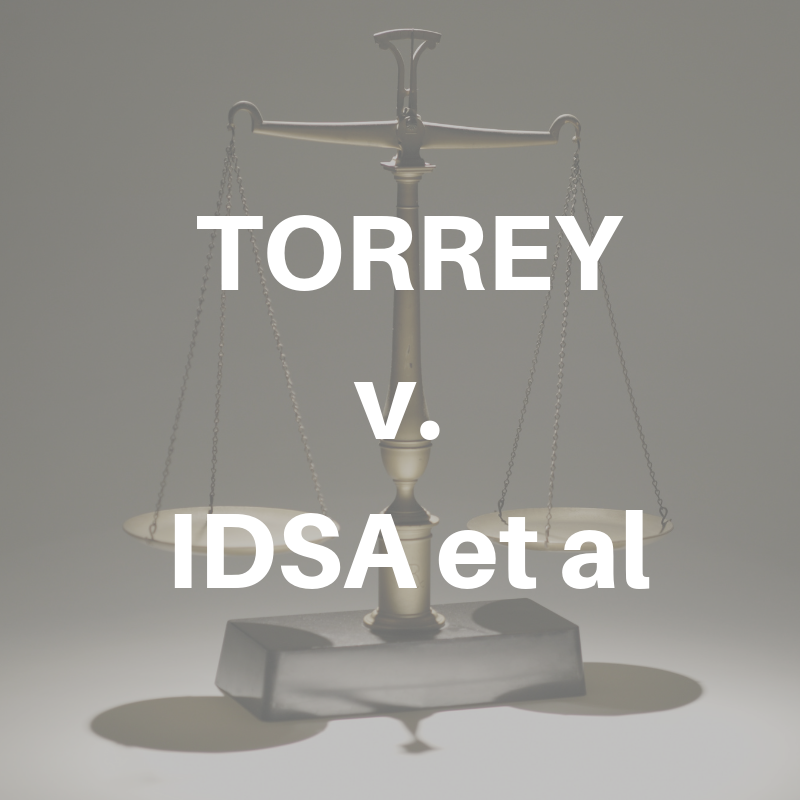 A federal lawsuit that may just validate the pain of thousands of Lyme disease patients – and the flaws in prevailing tests and treatments — is moving ahead in a Texas courthouse, despite attempts to kill it.

The lawsuit’s progress is a big development in the decades-old struggle of patients whose post-treatment conditions – involving myriad neurological, cognitive, musculoskeletal, and cardiac symptoms — have long been misdiagnosed and minimized. Patients have hence had to seek out-of-pocket treatment from physicians who risk their licenses providing it.

The suit, Torrey v. Infectious Diseases Society of America et al, aims to change that, and, make no mistake, is a serious challenge to the Lyme status quo (see my article from 2017).

Beyond that A-list of Lyme actors, the lawsuit also accuses eight insurers of conspiring with the IDSA and the Lyme architects to advance treatment protocols that limited care options to the 25 named plaintiffs, two deceased, for whom the protocols did not work.

Here’s what will happen shortly

A hearing on a second motion to dismiss the case will be held on March 11, at 2 p.m., at the U.S. Federal Courthouse, 500 North State Line Avenue, Texarkana, Texas. [Note: this story was edited on 2/27 to reflect the hearing’s recent date change.]

The suit, whose lead plaintiff is Texas resident Lisa Torrey, already survived one motion to dismiss. (See below.)

The judge in part granted and in part denied a previous motion to dismiss the case.

In favor of the IDSA-insurers side, the judge agreed that the lawsuit did not sufficiently describe the alleged fraud that it maintains was committed by the defendants under the Racketeer Influenced and Corrupt Organizations Act (RICO).

The court, however, ruled the patients’ side could redraft the complaint under RICO. A request for an extension to do that will be among the issues considered at the March 12 hearing.

But the motion to dismiss was largely decided in favor of patients, including on the crucial assertion that the defendants violated anti-trust statutes under the Sherman Act.

As the judge put it, summarizing the case, “Defendants [as alleged] engaged in a conspiracy to unreasonably restrain trade in the relevant market—the Lyme disease treatment market—by paying large consulting fees to the IDSA Panelists to pass the IDSA guidelines which deny the existence of chronic Lyme disease and establish the standard that all Lyme disease is cured with short-term antibiotics.”

Insurers then were able to deny claims, and doctors who treated outside the guidelines were marginalized in what became a monopolistic marketplace, the suit maintains.

In upholding the suit’s anti-trust assertion, the judge wrote: “Plaintiffs have sufficiently alleged that, in the absence of the IDSA, there would be competition among doctors for the treatment of chronic Lyme disease and competition among insurance carriers for coverage for such treatments. Similarly, Plaintiffs have alleged that Defendants’ adoption of the IDSA guidelines and standard of care for the testing, diagnosis and treatment of Lyme disease has harmed patients and doctors nationwide. … The Court finds a nationwide geographic market has been properly alleged.”

All of this, of course, must be proven at trial.

Beyond this, the judge granted the plaintiffs’ request for discovery, but so far it has been limited only to documents from four years before the lawsuit’s filing. The judge wrote, in reference to whether the court has jurisdiction to order discovery: “The Court finds that Plaintiffs have pointed to enough evidence preliminarily establishing personal jurisdiction over the IDSA Panelists to warrant jurisdictional discovery. Specifically, Plaintiffs point to the declarations provided by each of the IDSA Panelists in which each doctor attests to having visited Texas for professional purposes during the relevant time periods. …Moreover, Plaintiffs have established that the IDSA Panelists’ research and professional activities focus primarily on Lyme disease.” In a filing Friday, the Torrey lawyers called the four-year timeframe “arbitrary.”

Here’s what is pending

Among the issues that the hearing will consider is whether, essentially, to put chronic Lyme disease on trial. A motion by Anthem, Inc., the IDSA, and what is termed the “Doctor Defendants” asks the court to have all plaintiffs submit to independent medical examinations, or IMEs, by a Texarkana-based infectious diseases physician.

Their motion, which has been challenged by the plaintiffs’ attorneys, states: “The Lyme Claimants allege that they have suffered debilitating injuries because they have been denied appropriate medical treatments for so-called ‘chronic Lyme disease,’ allegedly due to an unlawful conspiracy among the Defendants to monopolize the treatment of Lyme disease. … Nearly all of the Lyme Claimants allege that they still suffer from the disease today and many claim that they are currently disabled or otherwise unable to work due to their illness. … (W)hether they currently or have ever suffered from Lyme disease, the severity of their symptoms, and whether those symptoms are attributable to Lyme disease or some other cause, are at the heart of this case and were put into controversy by the Lyme Claimants themselves. Well-prepared, peer-reviewed studies have established that as many as 88% of patients who have been told they have ‘chronic Lyme disease’ either do not have – or, in many cases, never have had – Lyme disease in any form.”

To support their assertion, the IDSA defendants cite an article on chronic Lyme disease by Duke University physician of pediatric medicine, Paul Lantos, which cites much of the Doctor Defendants’ research.

The hearing will also take up another request related to whether the patients are truly ill and with what.

The IDSA is seeking emails written by them – including any in which the words Lyme appear coupled with antibiotic, literate, chronic, claim*, cover* and den* (presumably meant to refer to claimed/claimant, coverage, denied or denial). Emails with the initials IDSA are also sought.

In its motion, the IDSA asserts: “Defendants’ email requests seek information relevant to the claims and defenses in this action. In the Complaint, Plaintiffs assert that they ‘suffer debilitating injuries’ and that such injuries impact them on a daily basis, including cognitive deficits, fatigue, and memory loss, resulting in a multitude of alleged harms, including the loss of careers, homes, and the ability to function. … Plaintiffs’ communications about their condition go to the heart of corroborating or refuting their allegations about their conditions and the harms that they allege they have suffered.”

The calendar for the lawsuit lists June 24, 2019 as the start of a jury trial in Torrey v. IDSA et al. Stay tuned.

Mary Beth Pfeiffer, an investigative journalist, is author of the acclaimed book, “Lyme: The First Epidemic of Climate Change.“