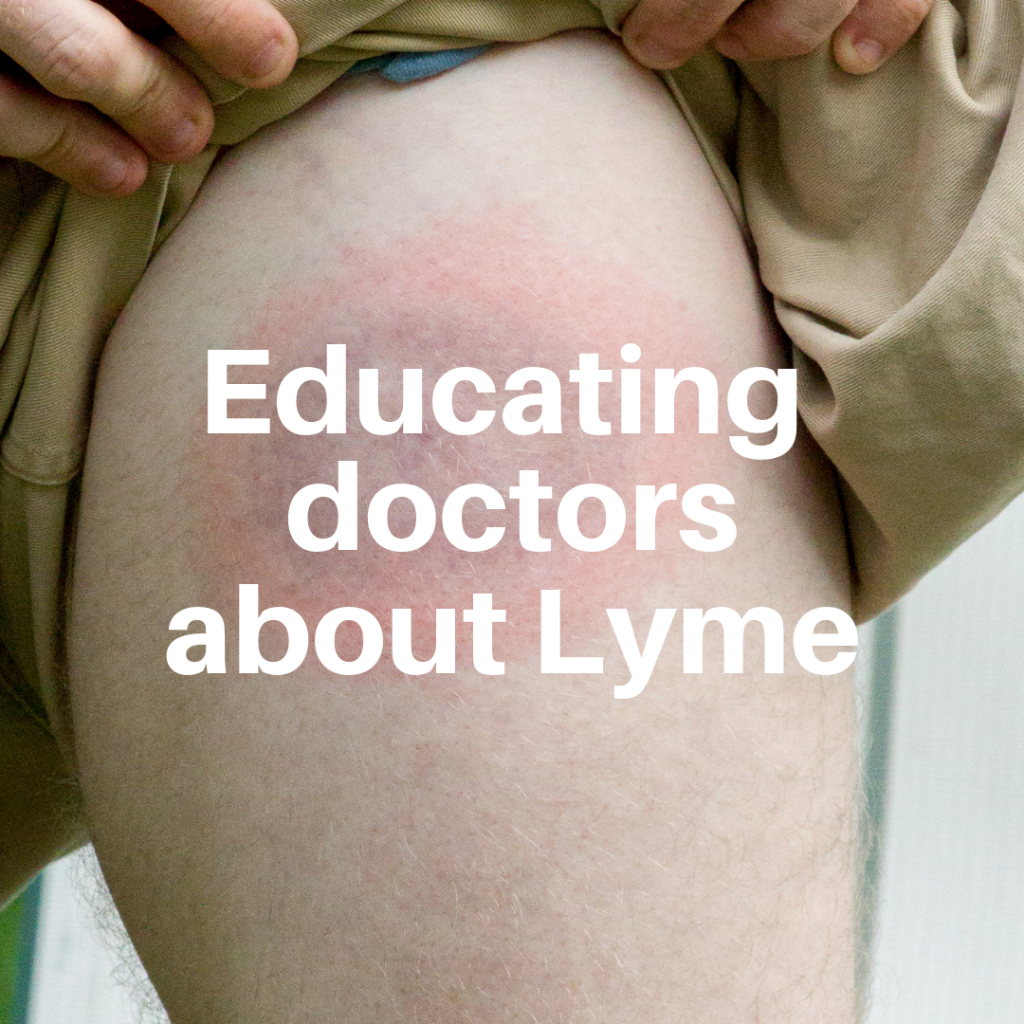 The following are my written comments to the ninth meeting of the Tick-borne Disease Working Group (TBDWG) on June 4, 2019.

My name is Lonnie Marcum. I am a physical therapist in California. Seven years ago, I had to quit work to take care of my 14-year-old daughter after she came home from school with flu-like symptoms and never got better.

Nearly a year later, she received a positive test for Ehrlichia chaffeensis. That led us to discovery of other vector-borne infections, including Lyme disease and Bartonella. At the time, I knew nothing about tick-borne infections, so when her doctor gave her a 21-day supply of doxycycline, I thought she’d be better in 21 days.

Years later, after tediously treating each of her infections and repairing her immune system, she gradually began to get her health back. And today I am happy to say she is about 80% better.

Since my daughter’s illness began, I have found a new purpose—to find a cure for Lyme and co-infections. I am now a science writer for LymeDisease.org, one of the most trusted sources of information for patients with Lyme disease. There I devote my time to reading current research, interviewing scientists and sharing what I’ve learned through my blog LYME SCI.

While it may be true that many patients who receive early diagnosis and early treatment do get better, a huge percentage of patients DO NOT receive an early diagnosis. In fact, fewer than 12% of the 12,000 patients in LymeDisease.org’s patient registry, “MyLymeData,” received a diagnosis within the first month after the tick bite. (Johnson 2019)

Delayed diagnosis is critical to understanding why so many patients are left with debilitating symptoms after standard treatment for Lyme. During the months to years that patients are suffering, the untreated infection spreads throughout the body, embedding itself deeply into connective tissues where standard antibiotics have a hard time reaching. (Embers 2012, Cabello 2017, Caskey 2015)

One study demonstrated that a delay in treatment by as little as 9-19 days is predictive of persistent Lyme symptoms. (Bouquet 2016)

Think of these untreated infections like a leaky roof. If you can stop the leak and mop up all the water the first day, the structure will probably be fine. But if you wait a week, a month, a year or more, the damage seeps into the roof, the walls, and the floor, causing mold and rot. If you catch it early enough you may only need to replace the drywall and paint. But if it goes deeper, the structure may need to be replaced.

This is exactly what happens with Lyme patients. Some are lucky to be treated early and recover completely.

Unfortunately, the majority of patients, like my daughter, are initially misdiagnosed with another illness and go months or years before receiving a proper diagnosis. During this time the infection(s) spread to the organs, the brain, the bone marrow, and the heart. (Coughlin 2018, Novak 2019)

Unfortunately, there is no standardized treatment for this patient population. The last NIH-funded treatment trial for patients with persistent Lyme disease was over 10 years ago and it did not reveal a solution. (Fallon 2008, Goswami 2013) The latest study out of Johns Hopkins University found that a triple-drug combination was the only method successful in eradicating the infection in mice. (Feng 2019)

The other issue is that ticks can carry multiple pathogens that can infect people at the same time. (Moutailler 2016) In the MyLymeData survey of patients with chronic symptoms of Lyme disease, over 50% had multiple infections (also known as co-infections).

The most common co-infections are Babesia, Bartonella, Ehrlichia, Mycoplasma, Rocky Mountain spotted fever, Anaplasma and tularemia—all pathogens that can be transmitted by ticks. (Johnson 2014)

The issue with many of these co-infections is they are not all treated with the same prescription medication as Lyme disease. For instance, a patient may receive a diagnosis of Lyme and start taking the appropriate antibiotic, but they may also have an undiagnosed babesia infection which requires an anti-parasitic medication.

As a result, this patient may not get better until all the infections are treated properly. Unfortunately, there are no clinical trials on the most effective method to treat patients with multiple infections.

Need for physician awareness and education

For example, I know a patient who just last week went to her doctor with a distinctive bull’s-eye shaped rash. Her doctor refused to give antibiotics because her test for Lyme was negative.

Even though the CDC clearly states, “Lyme disease is diagnosed based on: signs and symptoms, and a history of possible exposure to infected blacklegged ticks,” this physician refused to treat this woman during the critical early phase of infection. This is clearly an example of a lack of physician awareness and education.

The second issue here is that the standard test for Lyme is designed to detect antibodies that may take 4-6 weeks for the patient’s immune system to produce. (Borchers 2015) So, while I fault the physician for not knowing about the inaccuracy of the test in the early phase, I also fault the CDC for allowing a faulty test to remain on the market.

To summarize my recommendations:

Thank you for the opportunity to submit comments to the Tick-Borne Disease Working Group (TBDWG). I was an avid viewer of the first eight meetings of the TBDWG and am very happy with the final versions of the sub-committee reports and the Report to Congress. I find them to be some of the most comprehensive accumulations of information regarding tick-borne disease on record.

I look forward to following the second session of the TBDWG and hope that you are able to help implement some of the recommendations as proposed in the first TBDWG Report to Congress.

Moutailler S, et al, (2016) Co-infection of Ticks: The Rule Rather Than the Exception.