Although an early diagnosis of Lyme disease can improve the chance of recovery for patients, it doesn’t necessarily mean they are out of the woods.

MyLymeData, the largest study of Lyme disease using real-world data, has released preliminary findings of its initial survey of more than 4,000 patients. The results presented at the Columbia University/Lyme Disease Association conference in Minnesota are concerning.

Patients in the study who were diagnosed at an early stage were more likely to report being well (32%) compared to those whose diagnosis was delayed (9%)—a 21% increased improvement response.

For those patients diagnosed late, delays were primarily due to false negative blood tests (37%) and positive test results that were incorrectly dismissed as “false positives” (13%).  Many reported delays were due to clinicians’ failure to evaluate the patients for Lyme disease, believing that “there is no Lyme here.” 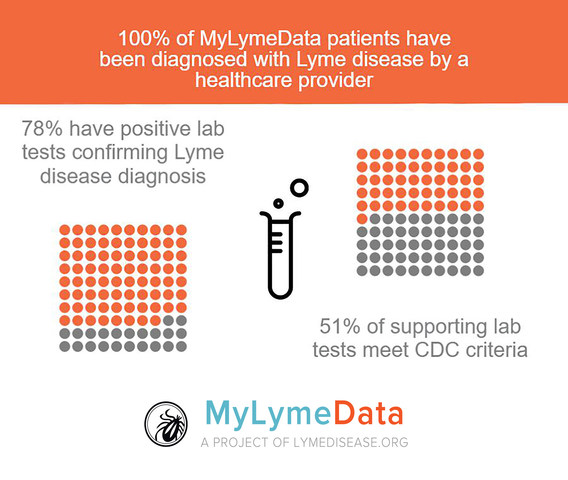 Even with early diagnosis, too many patients remain ill—68%. “Early diagnosis makes a big difference, but by itself is not enough,” says Lorraine Johnson, JD, MBA, Chief Executive Officer of LymeDisease.org.  “We need more effective treatments to help those patients who remain ill.”

Johnson says the passage of the 21st Century Cures Act is expected to give a much-needed boost to patient-driven observational studies, like MyLymeData, that use real-world evidence to improve patient care.

MyLymeData, which allows patients to input information about their individual experiences with Lyme disease, has enrolled more than 6,500 patients. This makes it the largest ever study of Lyme disease. In contrast, studies of chronic Lyme disease sponsored by the National Institutes of Health have been small, ranging from just 37 to 129 patients.

“Patient-powered registries that pool vast amounts of data will be a game changer for misunderstood illnesses like Lyme disease,” says Johnson. “Big data holds the key to future diagnostics and treatments for patients.”

The MyLymeData survey included the 4,254 patients enrolled at that time who resided in the U.S. and who had been clinically diagnosed with Lyme disease. The diagnosis of the majority of the participants (78%) was confirmed with positive laboratory tests—most by CDC standards (51%).

The response to MyLymeData has been so strong, says Johnson, that LymeDisease.org expanded the study to include tracking the course of disease and treatment response. MyLymeData is among the top 10% of patient registries in the nation, according to Johnson.

The newest phase of MyLymeData is open to both current and new enrollees who may register at LymeDisease.org. Patients currently participating in MyLymeData simply login to their accounts to complete the new survey sections.

About LymeDisease.org
At least 380,000 people are diagnosed with Lyme disease in the U.S. annually, according to the CDC’s most recent statistics. Since 1989, LymeDisease.org (LDo) has been a leading voice for Lyme disease patients and advocates nationally for accessible and quality healthcare for patients. LDo is committed to shaping healthcare policy through education and science-based advocacy.