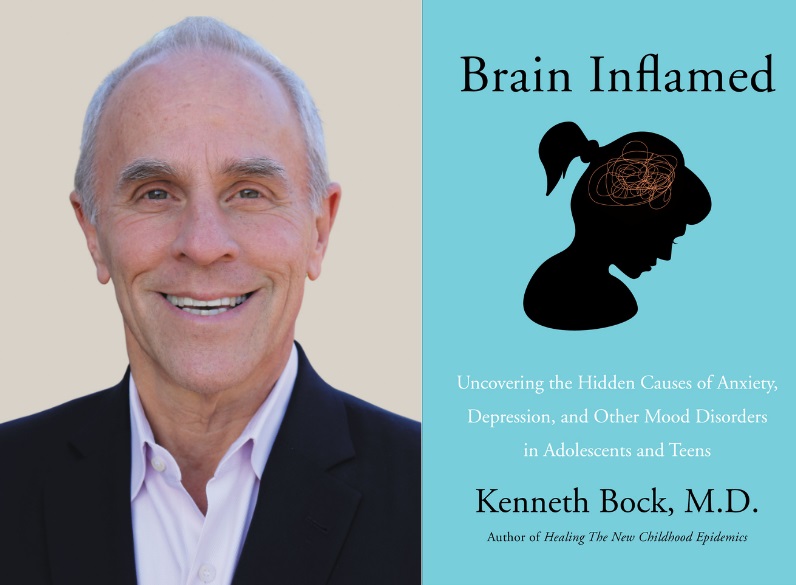 The following is an excerpt from Dr. Kenneth Bock’s new book Brain Inflamed: Uncovering the Hidden Causes of
Anxiety, Depression, and Other Mood Disorders in Adolescents and Teens.

This passage concerns the case of Stacy, an adolescent who experienced years of psychiatric symptoms which started after she was bitten by a tick at age 4.

By the time she first saw Dr. Bock at age 13, she’d already been prescribed these drugs: Ritalin, Focalin, Strattera, Lexapro, Venlafaxine, Lamictal, prednisone, Zyprexa, Zoloft, Ativan, sertraline and Seraquel. She had also had several doses of IVIG, a treatment for autoimmune conditions.

Stacey’s elementary school years were punctuated by hypervigilance, school phobia, paranoia, fear of contamination, and uncontrollable rages. Together with neurological symptoms, like the foot drag and the tics, and the OCD, all the symptoms and behaviors screamed brain inflammation to me. Here are some of the other clues I observed:

While ticks are the primary vector for Lyme disease, they frequently carry many other diseases as well, all of which can be transmitted at the same time. In fact, slightly over 50 percent of Lyme disease patients are also diagnosed with at least one co-infection such as Babesia, mycoplasma, or Bartonella.

Lyme disease can be bad; Bartonella can be worse. The same bacteria that causes cat-scratch fever, in which the lymph vessels become inflamed, Bartonella is treated relatively effectively with intracellular antibiotics when caught early. Unfortunately, because it can burrow into red blood cells, it doesn’t always show up in bloodwork. When patients come in with symptoms like numbness or tingling feet, a doctor might test for Lyme, but if the Lyme titer is negative, they’ll assume that whatever is ailing the person can’t be tick-borne.

However, if they haven’t checked the western blot, and they haven’t tested for any of the common co-infections that travel with Lyme disease (which is especially important in patients who come from endemic areas, work with animals, or spend a lot  of time outside), it’s premature to rule out tick-borne diseases. And early detection is important; as with Lyme, the longer Bartonella is left in the bloodstream, the harder it is to eliminate.

The most distinguishing symptoms of Bartonella are soreness on the bottom of the feet, especially the heel; ice pick–like pain in and around the eyes; headaches; and violaceous striae, reddish-purplish tracks that look like stretch marks. But it can also cause intense joint pain, GERD, difficulty swallowing, and crawling, burning sensations in the skin. Another symptom of Bartonella is intense, violent anger, sometimes accompanied by homicidal thoughts.

The other co-infections that frequently travel with Lyme have overlapping symptoms. Babesia, however, is a protozoan parasite that invades the brain and nervous system and causes fever, chills, sweats, chest pain, and most notably, air hunger. Mycoplasma, a type of bacteria, can cause severe fatigue, dry cough, and generalized pain. The more co-infections you have, the more complicated it becomes to treat the Lyme disease.

Stacey’s explosive reaction to the ADHD and psych meds could have been caused by a new Bartonella infection if she’d been bitten by another tick. More likely, however, the cause was brain inflammation, which is often what I find in children who don’t respond at all or have adverse reactions to psychiatric meds. ADHD medicines increase dopamine levels. For a kid with brain inflammation, that’s like throwing a lighted match on a vat of gasoline.

Some psychotropic meds are actually anti-inflammatory, which may be one of the mechanisms for their effectiveness in certain patients. Considered along with all of her history, Stacey’s reaction to these medications seemed extremely relevant to me.

If she did have brain inflammation, I had to consider that she could also have an autoimmune problem. Some doctors will say that the symptoms of post-Lyme are residual, that like PANDAS and strep, Lyme disease can provoke a secondary autoimmune problem that persists even when the bacterial infection is gone. That’s the big controversy when discussing persistent Lyme disease: is it a chronic infection, is it an infection with autoimmunity, or is it just a case of autoimmunity?

I think it’s a combination. You can kill the infection and still be left with fragments of dead bacteria that can stimulate the immune system and cause an autoimmune reaction, and at the same time bacteria can instigate molecular mimicry that triggers autoimmunity in genetically susceptible individuals.

In fact, about half of patients with persistent Lyme symptoms, in particular neuropsychiatric symptoms, test positive for antineuronal antibodies—antibodies produced against nerve cells, especially when they break down and release their neural antigens. The presence of these antibodies points to evidence of autoimmune inflammation in the nervous system.

If I ran a Cunningham panel—a special test that measures the concentration of antibodies present in the blood—and the results revealed elevated antineuronal antibodies, it could indicate that Stacey’s neuropsychiatric symptoms were being caused by an infection-triggered autoimmune reaction, which would also explain why IVIG had helped calm her neuropsych symptoms so dramatically.

From the book BRAIN INFLAMED: Uncovering the Hidden Causes of Anxiety, Depression, and Other Mood Disorders in Adolescents and Teens by Kenneth Bock, M.D. Copyright © 2021 by Kenneth Bock M.D. Reprinted courtesy of Harper Wave, an imprint of HarperCollins Publishers.

Click here to order a copy of BRAIN INFLAMED.


Click here to read a review of book in the Touched by Lyme blog.