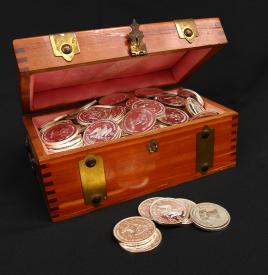 Rhode Island is the only state in the country requiring health insurance companies to cover longterm intravenous antibiotic treatment for Lyme-disease patients, no strings attached. The process stretched out over several years, with the creation of a Governor’s Commission on Lyme Disease, public hearings, an agreement with insurance companies, legislation with a sunset provision, and then finally, removal of the sunset provision. It was an epic journey and patient advocates finally struck the gold.

This article originally appeaared in the Lyme Times #35, Fall 2003

Governor Donald Carcieri signed the bill, Lyme Disease Diagnosis and Treatment Act (H6136 SubA/ S1173), on July 7. The vote followed testimony before the committee by LDARIC, patients and a physician advocating for the passage of the bill.
The state’s leading health insurance companies, Blue Cross & Blue Shield of Rhode Island and UnitedHealthcare of New England, opposed the bill, saying there is no evidence that long-term treatment is effective.

Rep. Raymond E. Gallison Jr., DBristol, one of the bill’s sponsors, told the Providence Journal that the bill almost fell apart during the last week as insurance company representatives proposed amendments that would limit the length of treatment to 12 weeks and narrow the type of doctors who could prescribe intravenous antibiotics. Covered treatments typically last four to six weeks. Promoters agreed to a compromise to enable the bill to pass with no amendments – a sunset provision will cause the bill will expire at the end of 2004, so that its impact may be assessed and evaluated by the legislature to determine further action.

Joseph S. Larisa Jr., a consultant and former chief of staff for Gov. Lincoln C. Almond, said patients whose policies are renewed next summer will be eligible for a full year of treatment, into 2005. Larisa, who is also Lisa Larisa’s brother, helped organize last year’s Lyme disease commission. He said he isn’t discouraged by the temporary nature of the bill.

LDARIC co-chair Lisa Larisa, present at the late night senate vote, was elated over the passage. She was opposed to limiting treatment duration. The sunset provision was the only change acceptable to LDARIC. Critics of a similar bill in Connecticut several years ago say treatment limitations discriminate unfairly against the sickest patients “Anything less than what was passed would not have benefited Lyme patients,” Ms. Larisa said. She thanked the House and Senate, and in particular, Representative Raymond E. Gallison Jr., D-Bristol and Senator Michael J. Damiani, DEast Providence, for their sponsorship of the bills.

“We are grateful,” said Ms. Larisa, “to Rep. Gallison for initiating the House bill after constituent input, and for his efforts in achieving unanimous passage. Senator Damiani kept the ball rolling with his monumental efforts to pass an intact bill which strongly protects patients’ rights.”

LDARIC co-chair Julie Merolla, who provided compelling testimony before a RI Senate committee hearing on the bill, was jubilant. Her son is severely afflicted with Lyme disease and has had difficulty obtaining treatment reimbursement.
“This is a victory for Lyme patients, especially our children,” she stated. “They are sick and struggling with this disease, and now maybe they will have one less thing to worry about and can concentrate on getting well.”

To read the original article in the Lyme Times, Fall 2003 issue, go to the CALDA Lyme Times Archives

Postscript: On June 8, Governor Donald Carcieri signed S2939/H7240 into law, removing the sunset provision from the 2003 Lyme insurance law. This signing makes Rhode Island the only state in the nation with mandatory coverage for long-term antibiotics for treatment of Lyme disease when ordered by a treating physician who determines it is medically necessary after a thorough review of a patient’s medical history and condition.

To read the full text of the RI law and the Blue Cross/Blue Shield of RI agreement, go to the Lyme Disease Association website.