TOUCHED BY LYME: Tick-borne mystery in Folsom, CA. Can you say “tularemia”? 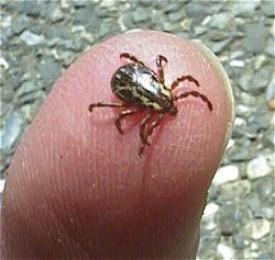 When the eight-year-old boy bent his head down, his mother noticed an odd little bump under his hair. Looking more closely, she saw it was a tick. “We live near wetlands,” she explained to me. “We pull ticks off our dog all the time. No big deal.” She plucked out the tick with tweezers, threw it away and forgot about it.

About a week later, the boy fell ill with a fever, aches and pains. He also had lymph nodes in his neck the size of golf balls. The doctor diagnosed flu and ear infection, and gave antibiotics. The boy got sicker.

Mother took her son back to the doctor and this time told him about the tick bite. No matter, doctor said. The tick had nothing to do with this flu. How do you know? pressed mom. Can’t be Lyme, said the doctor. No rash.

What about this weird sore on his head? asked mom. It hurt to the touch and “looked gross.” Doctor thought it might be a staph infection, took a sample, and sent it off to a lab.

It was the first known case of locally acquired tularemia in Sacramento County. According to public health officer Dr. Glennah Trochet, there have been a few cases of tularemia over the years, all contracted elsewhere. Typically, it would be someone who’d been hunting out of the area, she said. This was different. The boy had a tick bite, a confirmed case of tularemia, and hadn’t left home.

So Trochet’s office asked the vector control district to look for ticks where the boy had been bitten in Folsom. They found 30 dog ticks, and shipped them off to the CDC for testing. Turns out six—20%—were infected with tularemia. “Of course, we don’t know what else they might have been infected with,” admitted Trochet. “They only got tested for tularemia.”

I asked her: Now that you know this disease is here, will you continue to look for it? Find out where else it might be?

No, said Trochet. The budget’s been cut 60%. There’s no money for such tick surveillance. Now that health officials know there’s tularemia around, they can warn the public. And let doctors know to consider it when patients come in with certain symptoms. Trochet sighed. In this time of budget austerity, it’s the best her department can do.

So, readers, it’s more important than ever to learn to protect yourself and your families from ticks, which can carry all kinds of nasty stuff, not just Lyme. If you are bitten, pay close attention to whatever symptoms you develop, even if they may not seem related. A good place to start your education is the About Ticks section of the CALDA website.

Oh, and a note to that doctor: Just because there’s no rash doesn’t mean it’s not Lyme.