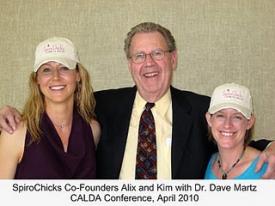 "Spirochick Alix" blogs about Dr. Dave Martz's presentation at CALDA's recent Lyme patient conference. Hearing how he overcame ALS touched her especially, because her father died of ALS the same year Dr. Martz was diagnosed with it.

Alix is one of several writers who produce the blog “SpiroChicks: Living the Lyme Life,” which can be accessed here.

Dave Martz should have died years ago. The former oncologist has recovered from ALS, a rapidly debilitating motor neuron disease, also known as Lou Gehrig’s.

In 2003, Dr. Martz quickly became unable to care for himself and, like other ALS patients, was told he faced certain death. He couldn’t roll over in bed. He couldn’t dress himself. The end was less than two years away.

Last weekend Dave Martz walked with ease to the podium at the annual California Lyme Disease conference and delivered a touching and miraculous story of living the Biblical proverb: “Physician heal thyself.”

The key to his recovery? Despite his ALS death sentence, Dr. Martz suspected he might have Lyme disease. Years of antibiotics saved his life and reversed most of the debilitating symptoms of ALS.

You might know Dr. Martz’s story from Under Our Skin, the film about the devastating neurological effects of Lyme disease and the associated politics. It is an entirely different experience to meet the affable, eloquent, and energetic Dr. Martz. A man who, by all odds, should not be here. Because of what happened to my father, his story was very personal. It was like meeting a ghost.

The same year Dr. Martz was diagnosed with ALS, my father* died of it. It was 2003. ALS struck my sixty-ish father shortly after he won a swimming competition in New England. He first noticed tripping over rugs. Then ALS paralyzed his legs, then his arms, then every muscle except his eyes. In the end, he could manage short sentences by taking a long breath from his breathing machine before exhaling each syllable.

I flew from the West Coast to visit him at his organic berry farm in New Hampshire, where he lay in bed, surrounded by his dormant winter fields, unable to move. A mechanical wheeze from his breathing machine punctuated the near-silence. I patiently listened as he asked if I forgave him for legally disowning me when I was a toddler. It was a highly emotional time. Near the former athlete’s bed were a wheelchair and a sling, which his wife and a bevy of caretakers used to lift him. At the end of my week-long visit, I hugged him goodbye, but he couldn’t hug back so I propped his arms around my back. His arms flopped down. The next day, he died while I was unpacking from the trip.

Dave Martz was not the first person to suspect Lyme disease’s role in ALS. In a few cases, antibiotics had been known to slow the progression of ALS. My father, who’d undergone surgery for arthritic knee pain right before the onset of ALS, learned of the ALS-Lyme connection and sent his blood to the specialty Lyme testing lab, IgeneX, in California. My father’s Lyme antibodies and Western Blot came back negative.

Dr. Martz also had some symptoms – mostly pain-related – that did not fit with ALS. Additionally, while checking off items on his “Bucket List” – the things he wanted to do before he died – he went on a trip to Africa. His fatigue was much better and he realized that the Lariam he was taking for malaria prevention could also treat babesia, a common Lyme co-infection. He became curious about Lyme.

Martz sent his blood first to an East Coast lab, then to IgeneX. Neither lab found evidence of Lyme his blood. But there was one more test that Martz did. It would be a life-saving test. Since Lyme can sequester itself in parts of the body such as the central nervous system, eyes, and joints, but not show up in the bloodstream, taking antibiotics can provoke the spirochetes to circulate and become detectable. Martz took antibiotics for 5 days, then sent his urine to IgeneX for one last test. It was a long shot, but one that paid off.

In his urine was the detectable DNA of Borrelia burgdorferi – the Lyme spirochete! He suddenly had a treatment plan. Instead of treating ALS, he’d treat Lyme with the hope of slowing his progression to full paralysis.

His rheumatologist, who was not a Lyme-literate doctor, said, “You’ll be well in a month!” [From the Lyme symptoms only.] This is in stark contrast to the ILADS guidelines which state that years of antibiotics are necessary to treat late or chronic Lyme disease.

In a month, Martz was a lot better. After taking an antibiotic cocktail that included Rocephin, Mepron, Flagyl, and Zithromax, Martz said his pain was literally gone and that he “never needed another pain pill.” Thirty minutes of stamina before the treatment had turned into 4 – 5 hours. Like other ALS patients who had responded to antibiotics, he was neurologically unchanged. This doesn’t happen in ALS, as one of its hallmarks is a relentless decline. Within two months, he could cross his legs by himself. In six months, he could rise from a chair.

Today, in contrast to ALS patients who are dead two to five years after diagnosis, Martz is very alive and functional seven years out. His muscle tone in his right calf muscle has not returned, but he is active and can walk totally unassisted. He says he has the energy to walk and talk for 10 – 14 hours a day. He can do 5 – 6 hours of sedentary work per day. His recovery is holding steady, even after discontinuing antibiotics more than a year ago. He is quick to state he is not 100% of the guy he was before, but he says “you can get by pretty well on 2/3rds.”  He is the living proof.

In an upcoming post, I’ll share what Martz did after he wondered, “Was I freak of nature, or were there others with ALS and Lyme?”

* SpiroChick Alix had two fathers. She is happy to report that the one who adopted and raised her is in his sixties and very healthy. In addition to being a SpiroChick, she edits  www.mednauseam.com, recently voted #1 General Medicine Blog.