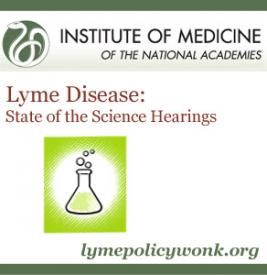 I am posting the written speeches of those who commented during the public comment period of the IOM. The speech below is that of Helene Jorgensen, the author of “Sick and Tired: How America’s Health Care System Fails Its Patients”. Helene Jorgensen presented her own encounter with Lyme disease and addressed the flaws in the clinical treatment flaws to date. Her testimony is available as a downloadable pdf by clicking the link at the bottom of this blog post.

I appreciate the opportunity to speak today. My name is Helene Jorgensen. I am a PhD economist, and I have researched issues related to health care since 1998. I am the author of the book Sick and Tired: How America’s Health Care System Fails Its Patients (PoliPoint Press 2010), in which I document my own battle with Lyme disease.

A study by Logigian et al. (1990) of 27 patients with chronic neurologic abnormalities of Lyme disease found that patients suffered from encephalopathy, characterized by memory loss, mood changes, and sleep disturbances; memory impairment; and polyneuropathy. Following treatment (two weeks of IV ceftriaxone), 22 percent of patients improved, but then relapsed within six months of ending treatment. An additional 15 percent showed no improvement at all. However, longer treatment courses were associated with better treatment outcomes. For example, a study by Wahlberg et al. (1994) found that the rate of treatment failure associated with two weeks of IV antibiotics could be significantly reduced from 69 percent to 13 percent if patients were treated with an additional 100 days of oral antibiotics.

A number of factors have been identified to contribute to treatment failure, including delay in diagnosis, co-infection with other tick-borne diseases, and inadequate initial therapy (Cameron et al. 2004). But we need more research in this area. The studies on treatment failure in patients with neurologic Lyme disease were characterized by small sample sizes, rendering them unsuitable for statistical analysis. Therefore, little is known about the correlation between patient baseline characteristics – such as duration and severity of illness – and treatment outcomes.

Lyme disease has some of the characteristics of other treatment-resistant infections that justify longer treatment, including being an intracellular pathogen, and formation of spheroplast-L-form variants (also referred to as cystic form).[1] Recently, a form of biofilm-formation of large Borrelia burgdorferi bundles has been observed.[2]

This suggests that there is a strong possibility that patients, who relapse following 2-4 weeks of antibiotic therapy, have an active infection. Four controlled trials have looked at the benefits of additional antibiotic therapy. A 2003 study by Krupp et al. found a statistical significant effect of additional therapy (28 days of IV ceftriaxone) in Lyme disease patients with persistent severe fatigue. The authors speculated that their trial could have been compromised because “more of the ceftriaxone than the placebo treated groups correctly guessed their treatment assignment” (p. 1929). At 6 months, 69 percent of the ceftriaxone group correctly guessed they were in the treatment group, while 32 percent of the placebo group correctly guessed that they were in the placebo group. This means that 68 percent of the placebo group thought there were in the treatment group. So nearly the same proportion, 69% vs. 68% respectively, thought they were in the treatment group, meaning that the placebo effect would have been almost identical in the two groups. This demonstrates that the trial, in fact, was not compromised as the authors incorrectly deduced.

A study by Fallon et al. (2008) examined retreatment (10 weeks of IV ceftriaxone) of Lyme disease patients with cognitive impairment, and found a statistical significant effect in overall cognition at 12 weeks. This effect was not sustained to 24 weeks. However, among patients with greater baseline impairment, improvements in physical functioning and pain were sustained to 24 weeks.

Finally, a study by Klempner et al. (2001) was based on two concurrent trials of patients with well-documented, previously treated Lyme disease, who had persistent neurocognitive symptoms. (The treatment group received 30 days of IV ceftriaxone followed by 60 days of oral doxycycline). The study found no statistical significant improvement in health-related quality of life (measured by two summary scores from the SF-36). However, a subsequent analysis of the Klempner study by biostatisticians Allison DeLong and Tao Liu at the Center for Statistical Sciences in the Department of Public Health at Brown University in Providence, RI found that the Klempner study “has substantial statistical problems that prevent its use in formulating treatment guidelines.”[3] Specific problems identified were: 1) The results could have been biased because Klempner did not assess the impact of patients who dropped out of the study. The study does not provide the number of participants who did not complete the SF-36 questionnaire at end point of study. These patients were placed in the worsened group. 2) The analysis was inefficient because Klempner converted a continuous variable into a discrete variable, resulting in loss of information. 3) DeLong and Liu found that the study had an unsatisfying measure of the treatment effect. Klempner’s chosen cut off for the measure of SF-36 score improvement was much higher than those used in other medical studies. In fact, in order to be likely to obtain a statistical effect, the average Lyme disease patient had to perform better than the general U.S. population at the end of the trial. This is clearly an unrealistic expectation. So in conclusion, the Klempner analysis by design could not possibly detect clinically meaningful treatment benefits.

Statistical analysis is the foundation of medical research. Therefore, I strongly encourage the planning committee to invite a biostatistician to present at the IOM conference in September. Since DeLong and Liu have conducted statistical analysis of Lyme disease research, I think they would be an obvious choice. I have spoken with DeLong, and she and/or Liu are willing to attend the conference.

As a patient who has benefitted tremendously from longer duration of antibiotic therapy, I strongly encourage this planning committee to pursue further research on treatment for patients with neurologic Lyme disease to lower the unacceptably high rates of treatment failure. Persistent neurologic Lyme disease is a serious illness with severe symptoms, and effective treatment is desperately needed. Lyme disease stole five years of my life. After my relapse in 2003, I had to stop working as an economist. The resulting loss of income and medical expenses placed a serious financial strain on my family. I pursued further treatment, and did get better.