LYMEPOLICYWONK: Voting Violations–Which Way IDSA, the Right Way or the Might Way? 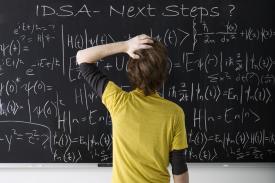 One of the problems with the IDSA reviewing its own guidelines is that it is not an independent process. The IDSA selected the panel, paid the ethicist, and sets the ground rules. And, now we have the IDSA manipulating the voting process to achieve a goal–protection of the IDSA professional reputation–that conflicts with the goal of providing quality patient care. Think about it. The vote on the lab test requirement for diagnosis was 4 to 4. 4 to 4 means there was NO consensus. Yet the IDSA chalked this up as a victory on its side by ignoring the two step vote requirement and flipping the supermajority vote in its favor. The IDSA is essentially saying 4 to 4 means the IDSA wins on this point. To the fox guarding the chicken coop, this makes perfect sense. Let me drill down into the detail so that what the IDSA did here is clear.

First, the Action Plan in the antitrust Settlement Agreement states that:

The principle function of the Review Panel shall be to make an individual determination whether each of the recommendations in the 2006 Lyme disease guidelines is medically/scientifically justified in light of all of the evidence and information provided. (Section 3a)

The Action Plan requires that panel determinations require a 75% supermajority vote.  Here, 6 out of 8.  Second, the Action Plan requires that “based on the weighing of the evidence”, the panel recommend one of three options for the treatment guidelines: no change, partial change or a complete rewrite.  You cannot get to step two without first determining whether each of the recommendations is medically/scientifically justified.  How could you decide whether to revise the guidelines without weighing the evidence supporting each guideline recommendation?

Moreover, this interpretation of the Action Plan is, in fact, endorsed by the IDSA in its internal memo from Jennifer Padberg to the panel.  The memo states:

The plain language of this memo requires two steps, first the weighing of the evidence for each recommendation based on a supermajority vote, second “upon completion of the voting on the individual recommendations in the 2006 guidelines” a vote on whether to change the guidelines in whole, part or not at all.

The memo further endorses the supermajority vote required to uphold each guideline recommendation:

All votes require supermajority support (75% or more). Hence, a minimum of seven [now 6 with the resignation of Dr. Duray] panel members must vote in favor of a recommendation in order for the panel to deem it supported by the evidence.

I think the path is pretty clear.  The 4 to 4 vote means that there was not a supermajority that felt the recommendation was supported by the weight of the evidence.  How important is that?  Well, ask a Lyme patient who was not diagnosed and treated timely because of the flawed diagnostic tests and you will see that flawed Lyme tests can destroy lives.  It’s as simple as that.

And, depending on when you ask them, the IDSA will admit this. For example, on June 25, 2009, the IDSA sent a letter to Waxman that stated in part “ IDSA believes that specific and more sensitive diagnostic tests for Lyme disease are needed.“

Well, ok, then.  This process should reflect that and the IDSA should get out of the way and let the panel do its job.

You can download a copy of the IDSA settlement agreement, action plan, Jennifer Padberg’s memo, and the letter from the Connecticut Attorney General calling upon the IDSA to correct this voting violation at the link below my previous blog post on this topic, “IDSA Violates Settlement Agreement Voting Procedures“.