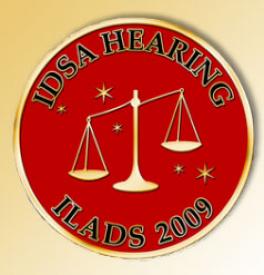 Responding to patient concerns, the President of ILADS, Dr. Robert Bransfield today delivered a letter to the IDSA calling upon the organization to remove barriers to guidelines change. The letter follows patient complaints to ILADS about the IDSA voting process, which were uncovered by the Connecticut Attorney General in the oversight of the IDSA Lyme guidelines review process. According to the Attorney General, the voting process used by the IDSA was in violation of the terms of the antitrust Settlement Agreement. The Attorney General has called upon the IDSA to redo the vote using the proper voting procedures. Text of the ILADS letter follows the jump.

You can read the background on the AG letter to the IDSA here.

Patient organizations have raised new concerns that the IDSA Lyme guidelines review panel might not address the needs of individuals with Lyme disease. These organizations had hoped that their written and oral submissions to the IDSA review panel would lead to changes in the 2006 IDSA Lyme guidelines regarding diagnostic and therapeutic options aimed at benefitting individuals with Lyme disease. Instead, the IDSA panel appears to be ignoring the proper voting procedures, thus making it harder for necessary changes in the guidelines to occur.

ILADS is concerned that the existing IDSA Lyme guidelines do not reflect the best available scientific and medical evidence for many patients with Lyme disease. To date, the limited clinical trials sponsored by the National Institutes of Health have validated the severity of chronic manifestations of Lyme disease 4.7 to 9 years after onset. ILADS has concluded that the current IDSA Lyme guidelines do not offer sufficient diagnostic and treatment options to improve the outcome for these individuals with Lyme disease.


ILADS has raised concerns that physicians experienced in treating Lyme disease based on divergent evidence and dissenting opinions were excluded from the 2006 IDSA Lyme guidelines review panel. IDSA also excluded these physicians from membership on the current guidelines review panel if they reported more than $10,000 income per year treating Lyme disease. The review panel made this decision despite the fact that, as a general rule, practicing clinicians participate in guidelines formulation for other conditions.

ILADS presented the divergent evidence and dissenting opinions about Lyme disease in July 2009 to the review panel, including 300 pages of analysis and over 1,300 pages of relevant peer-reviewed research. ILADS respectfully requests that you ask the review panel to remove any barriers to panel members who might recommend diagnostic and treatment options aimed at improving the outcome for individuals with Lyme disease.