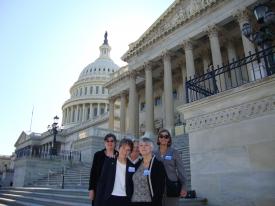 Lyme practitioners, advocates and patients descended on the Washington DC area last month, for a series of Lyme conferences and related activities. I was lucky enough to join in. Here’s a smattering of my impressions.

Oct. 21—The day before other things got underway, five CALDA activists rendezvoused at the US Capitol for a “Lobby Day” for HR1179/S1352, the Lyme and Tick-Borne DiseasesPrevention, Education and Research Act of 2009.  The photo shows our group standing in front of the Capitol.

We focused on California representatives on key committees, with a goal of persuading each of them to co-sponsor our legislation. We met with staff members to discuss our concerns, providing a packet of background information about the bill. (We also got to ride a really cool little underground train that zipped us from congressional office buildings to the basement of the capitol!)

Oct. 22—The second annual CALDA-sponsored Lyme activists’ workshop. Activists from around the country—some seasoned veterans, some newbies just getting their feet wet—gathered to meet, share, and learn from each other.

CALDA CEO (and Lyme Policy Wonk) Lorraine Johnson gave a keynote talk called “Lyme as a Social Movement.” She made fascinating comparisons between Lyme-related political struggles and the early days of the breast cancer movement.

(Yes, it’s hard to remember that breast cancer awareness used to be almost non-existent, and treatment options were controversial. Women typically went under the knife not knowing if their breasts would be intact when they awoke. Alternatives to mastectomy (of which there are now many) were frowned on by the medical establishment. There’s been a sea change in breast cancer attitudes over the years, and many advocacy lessons to be learned.)

Other speakers discussed federal Lyme legislation, state legislation, and issues concerning children with Lyme in the schools. (More about that in future blog postings.)

Oct. 23—Lyme Disease Association/Columbia University Scientific Conference. A stellar lineup of speakers discussed new developments in Lyme disease research. One who stands out in my mind is Dr. Susan Little, a veterinarian from OklahomaStateUniversity. Her topic was “Dogs as sentinels of tick-borne infection.”

Although no government entity keeps records of Lyme in dogs, Dr. Little pointed out that statistical information on the subject abounds. The companies that make canine Lyme vaccines and testing kits have a huge body of data. “Ten million dogs a year are tested for Lyme,” stated Dr. Little. That data on dogs has been invaluable in showing the geographic expansion of tick-borne infections throughout the US.

Oct. 24-25—ILADS conference. This one was the big Kahuna. More than 40 speakers on a dizzying array of topics: neuropsychiatric Lyme; Lyme in Pregnancy; Lyme and autism; the nuts and bolts of treating Lyme; when antibiotics don’t work. Those are just a few of the subjects covered.

In addition to the formal program, there were many opportunities to network with people from all over, including foreign countries.

Summaries of both the LDA and ILADS conferences will be in a future issue of the Lyme Times.

And I’ll have more stories from the Lyme conferences in future blog postings.