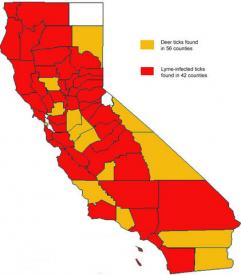 An off-hand question from a neighbor was eerily prophetic.

The following article ran in my local newspaper, The Davis Enterprise, in honor of Lyme Awareness Month.

Four years ago, practically overnight, my then- 13-year-old daughter became seriously disabled with a puzzling and painful illness. None of the top medical specialists we visited could alleviate her condition or even figure out what was wrong. This previously healthy and athletic teenager suddenly needed crutches and then a wheelchair, due to unremitting body-wide pain and a cascade of other symptoms that worsened daily.

An off-hand question from a neighbor was eerily prophetic: ‘Could it possibly be Lyme disease?’

Lyme disease? I’d barely heard of it. I didn’t know that with 200,000 new cases annually, Lyme disease is becoming a major health epidemic. (That’s five times the number of new AIDS cases.) Or that Lyme is in all 50 states and many foreign countries. Or that Lyme- carrying ticks have been found throughout California, especially in spots where my family had hiked and camped many times.

I also didn’t know that Lyme disease – and many of my daughter’s primary symptoms – would place us smack-dab in the middle of a roiling medical controversy. There are bitter disputes among different factions about how to even define the illness, let alone how to diagnose and treat it. And as patients are increasingly caught in the middle, treatment comes late if at all. (Even though prompt treatment offers the best chance for a good outcome.)

The situation is muddied by the fact that Lyme is a multi- system disease that can affect different people very differently. Symptoms can mimic multiple sclerosis, chronic fatigue syndrome, Parkinson’s disease, fibromyalgia and a host of other conditions. Lyme can cause problems of the heart, joints and gastrointestinal tract. It can bring on depression, cognitive impairment and assorted neurological difficulties.

Complicating things further, Lyme is often accompanied by co-infections (other nasty microbes transmitted by ticks), which bring their own perplexing symptoms.

Moreover, there exists no reliable diagnostic test for Lyme. The screening test that’s typically used, the ELISA, has been shown to miss as many cases as it finds. (How comfortable would you be with an AIDS screening test that missed half of all AIDS cases?) There are other lab tests for Lyme, but they all have deficiencies.

The Lyme debate pits different groups of doctors against each other, affects how both the federal government and states report the disease, and impacts insurance coverage. For patients, the direct upshot is that untold thousands of people with Lyme are routinely denied appropriate medical care. Tragically, this condemns many to a lifetime of increasingly debilitating chronic illness.

In our case, many of our daughter’s symptoms were highly suggestive of Lyme disease. Yet her doctors said she didn’t have it, gave no credible alternative diagnosis and offered no effective treatment to stem her alarming deterioration. What were the parents of a desperately ill child supposed to do?

Like countless others with seemingly nowhere to turn, we scoured the Internet. Online Lyme patient support groups connected us with those who could offer advice based on hard-earned personal experience. This led us to education and advocacy groups like the California Lyme Disease Association. Eventually, we found our way to a Lyme-literate medical doctor and a variety of alternative practitioners, including a naturopath and a specialized chiropractor.

It has been a long, hard, expensive slog, but our efforts have paid off. After more than three pain-wracked years in a wheelchair, our daughter is 17, pain-free, walking, driving (sometimes dancing a jig!), carrying a full academic load and participating in a variety of creative pursuits. To us, it seems like a miracle. Her treatment continues for some lingering symptoms, but we fully expect her to lead a long and healthy life. What more could a mother ask for?

The California Legislature has joined Lyme patient groups across the country in declaring May as Lyme Disease Awareness Month. I urge you to take that to heart, and learn how to protect yourselves and your families from tick-borne illness. A good place to start is the California Lyme Disease Association’s website.

If you or a member of your family has Lyme disease, a group called Lyme Support Sacramento meets monthly at the Rancho Cordova Library. For more information, e-mail saclyme@gmail.com.

Additionally, our family is sponsoring a screening of an award-winning documentary about Lyme disease called ‘Under Our Skin.’ This riveting film explores the medical/political/financial controversy surrounding Lyme disease in a way that will make you sit up and take notice. The free showing will begin at 7 p.m. Saturday, May 16, at the Stephens Branch Library, 315 E. 14th St. in Davis.

The author, Dorothy Kupcha Leland, can be reached at dleland@lymedisease.org.