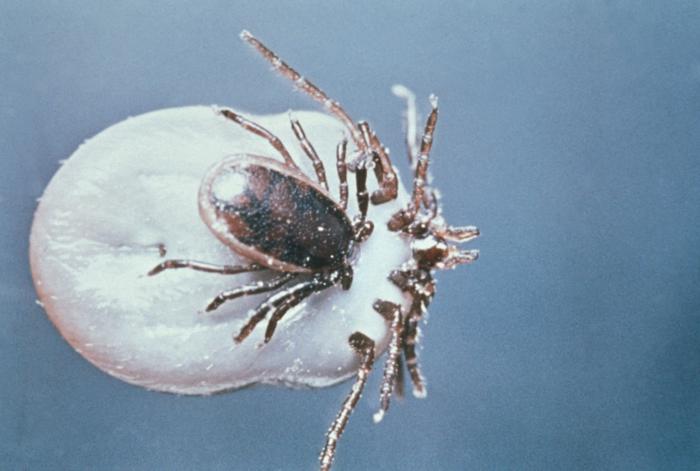 Lyme borreliosis is a disease caused by bacteria of the genus Borrelia that are transmitted by a bite from a tick of the genus Ixodes.

Scientists from the Institut Pasteur used mice to study the transmission of bacteria by ticks infected with various European and North American species of Borrelia.

They found evidence of rapid bacterial transmission following a bite, with infection occurring within 24 hours of an adult tick bite and sometimes even sooner for nymph bites. This is a timely reminder of the importance of removing ticks as soon as possible after being bitten to prevent infection.

Lyme borreliosis is the most common vector-borne disease in Europe. It is caused by spirochetes belonging to the Borrelia burgdorferi sensu lato complex.

This complex includes several species that are pathogenic for humans: Borrelia burgdorferi sensu stricto, B. afzelii, B. garinii, B. bavariensis, B. spielmanii, B. valaisiana and B. lusitaniae.

The bacteria are transmitted through a bite from a hard tick of the genus Ixodes – in Europe, primarily Ixodes ricinus. Ticks can infect a wide variety of hosts. Humans are considered to be an accidental host; transmission can occur if they come into contact with an environment favorable to ticks.

Ticks have three lifecycle stages that can bite humans – larva, nymph and adult – but bacteria are usually transmitted through bites from nymphs, which are higher in density and often go unnoticed because of their small size.

In this study, we used a mouse model to determine the kinetics of infection by Ixodes ricinus ticks (nymphs and adult females) infected with various European and North American strains or species of Borrelia.

We also compared the dissemination of various strains and species of Borrelia by different modes of inoculation (via infected ticks or by injection of bacteria).

Unlike the American strains, all the European species of B. burgdorferi that we studied were detected in the salivary glands of adult ticks before a blood meal, suggesting the possibility of rapid transmission of the bacteria following a bite.

The results were consistent with this theory: infection occurred within 24 hours of a bite from an adult tick. Moreover, our analysis shows that nymphs infected by European species of B. burgdorferi are capable of transmitting these pathogens within 12 hours of attachment.

Our study proves that B. burgdorferi can be transmitted more quickly than stated in the literature. It is therefore vital to remove ticks as soon as possible after being bitten to prevent infection.

Furthermore, the study shows that the tropism of Borrelia varies depending on the strain and species studied, which explains the variety of clinical manifestations of Lyme borreliosis.

We also demonstrate a difference in the tropism of Borrelia following a tick bite, confirming the role of tick saliva in the efficacy of infection and dissemination in vertebrate hosts.

Tags : how long does it take a tick to transmit Lyme?, Institut Pasteur, tick transmission time