TOUCHED BY LYME: After “Rambo daughter” succumbs to Lyme, dad dedicates himself to teaching others 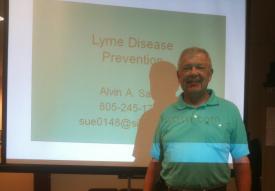 He called Lori his "Rambo daughter," a strong athletic soldier who liked to run marathons. But after a tick bite gave her Lyme disease none of this dad's efforts could save her life. Now, he channels his grief into educating others about how to prevent the spread of tick-borne illnesses.

Before Lori Camille Merrill got sick, she was a strong and active person. She served in the US Army and won physical fitness awards. Her parents called her their “Rambo daughter.” But things started changing after 2000, after she was apparently bitten by a tick during a fishing trip in Oklahoma.

She showed her first symptoms after the Big Sur Marathon in 2002, her fourth marathon within a year. She started having right knee joint pain, diagnosed as arthritis.

Over the next few years, Lori developed additional symptoms of extreme fatigue, insomnia, back and joint pain, and extreme headaches.  A former Californian who lived in Oklahoma with her daughter, the single mom was forced to quit her job because of her overwhelming health problems.

She saw a string of doctors, both near and far. Some couldn’t put a name to what she had…some called it fibromyalgia…after several years, she was diagnosed with chronic Lyme. Her parents crisscrossed the country taking her to specialists in Texas, Colorado, Missouri, and North Carolina. None of the extensive treatments she underwent helped her. Her health continued to spiral downward. She had breathing problems, a pulmonary embolism, a stroke in her eye, and eventually, a leaky heart valve.

In June of 2009, she developed pneumonia while waiting for heart valve surgery. On June 26, at age 37, she passed away at home.

Overcome with grief and frustration, her dad, retired Air Force Officer Al Salge, committed himself to “finding a way to get back at this disease.”

“We were in deep mourning,” he remembers. “I had to find a way to cope with losing my precious daughter.”

He started educating anybody who would listen. He joined CALDA and put together a briefing to teach others how to prevent Lyme disease. He has spoken at hunter safety courses and health clubs in Santa Ynez (a small community north of Santa Barbara.) He has distributed CALDA literature to rangers at nearby Lake Cachuma County Park.

An avid runner, this coming weekend, he will join other family members at the Big Sur Marathon, in memory of Lori. (This will be Al’s 18th time in the annual event. Lori herself ran it twice.) They’ll wear memorial T-shirts and caps in her honor, and will join in prayer at one special spot where her ashes were scattered last year.

“We loved her so much. We tried so hard to help her. And she died anyway,” Al says softly. “I just want to help other people learn how to save themselves from the same fate.”