“Two steps forward and one step back is progress.” 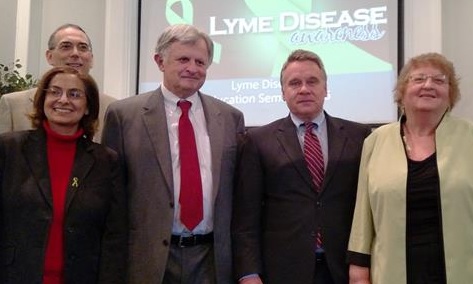 Dr. Bransfield, past president of ILADS and noted neuropsychiatrist, gave an overview of Lyme and co-infections. He discussed the intricacies of patient assessment and testing, described the two standards of care, and explained the plethora of treatment options.  Describing the political climate of tick-borne infections, Dr. Bransfield said, “Lyme disease may currently be the most controversial issue in medicine.” He emphasized the importance of “think[ing] outside the box with complex diseases.” He evoked laughter when he discussed the inadequacies of two-tier testing (ELISA then western blot) saying, “The sacred cow of two-tier testing in reality gives us a bum steer.”

Dr. Jodie DaShore, an integrative physician who has personally battled Lyme and Asperger’s, spoke about how she diagnoses and treats her patients considering their genetic makeup. She urged the audience to “please do your entire genome” because tick-borne illnesses are major epigenetic triggers. Having a 13-year-old son who is a fourth generation Lyme patient, Dr. DaShore encouraged parents to forgive themselves for not preventing their children’s illness. “Any work we do on ourselves cascades down to our offspring.”

Congressman Smith gave a passionate speech about the current political climate of Lyme, comparing it to autism. “The culture of indifference and denial has changed on autism, but it has not changed on Lyme disease.”  He said the global presence of tick-borne illnesses should be “cause for great concern” and that the IDSA “has done a great disservice to anyone carrying this disease in their bodies.” He then revealed that his own daughter has recently been diagnosed with Lyme.

LDA President Pat Smith gave a comprehensive overview of Lyme including the status of research grants, incidence and prevalence data, TBIs in pets, prevention tips, co-infections, tick profiles, and Lyme vaccine history. Speaking of the importance of science to combat those who lobby against chronic Lyme disease, she said, “They do not want chronic Lyme disease to be a reality.”

The perspectives of Lyme patients and caregivers were provided by the conference organizer, Doug Kahn, his young adult daughter Jennifer, and Dr. DaShore’s 13-year-old son Brian. Mr. Kahn, his wife, daughter and son have all been afflicted with Lyme disease for years. As a teen, Jennifer spent more than four years in bed, was unable to walk or take care of herself, and was given only five weeks to live. Spending “hundreds of thousands of dollars outside of what insurance paid” on more than 50 doctors, the family “tried to turn the world upside down to make her better.” Some of the advice Doug, Jennifer and Brian shared included the following:

Healthy and future doctor Brian DaShore summed it up by saying, “the important thing is we didn’t give up.”