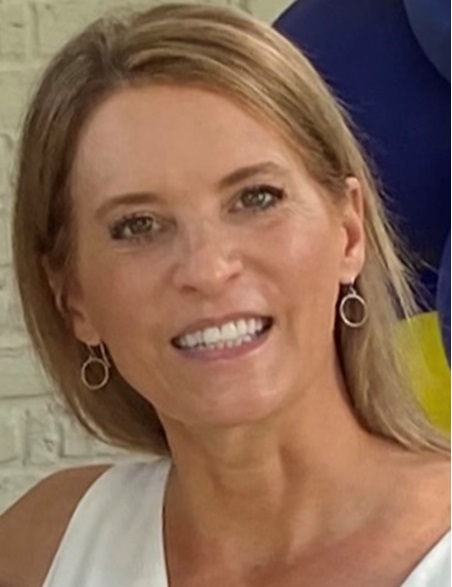 The answers are rooted in the lack of available, dis-aggregated, and comprehensive data. But they are also complicated  by the use of “Lyme” as a catch-all phrase encompassing a variety of tick-borne diseases, when Lyme may be less endemic in some areas than other tick-borne diseases.

From a health policy perspective, the importance of county-level data to prevention, diagnosis, and treatment cannot be overstated.  For almost all other diseases, sustainable and reliable county data are the foundations to building healthy communities. So why not tick-borne diseases?

In a recent article, Drs. Connie McNeely, Kip Thomas, and Chris Brooks and I employed promising new approaches to tick-borne disease surveillance in Texas with the goal of linking differing forms of tick-borne disease surveillance data into a comprehensive picture. The Centers for Disease Control (CDC) supports the “One Health Model,” which considers people, animals, and the environment as interconnected in assessing and addressing zoonotic disease.

As noted in our study: “The overall purpose was to determine if clinically diagnosed and CDC-positive Lyme disease human reports are geographically similar in disaggregated form via county, bordering county, and ecosystem to canine and official CDC counts. Comparisons between patient self-reported disease and official counts of disease are not widely used methods of surveillance, but are important epidemiological tools when disease can be linked to an event, such as a tick bite.”

The need for such comprehensive and new surveillance techniques is imperative. Here is why: The CDC publishes county-level Lyme disease data for anyone to view. However, the CDC limits all other tick-borne diseases to state-level surveillance only. The public and researchers do not have access to these data.[1]

CDC’s Lyme disease spreadsheet, on the other hand, is updated annually and published on the CDC website. Therefore, public health officials should, in theory, have the data they need to design prevention campaigns and assess human disease risk. Nationally, however, those data are known to undercount the real presence of Lyme disease, as numerous scholars have demonstrated.

Additionally, some of the cases within the CDC dataset may not be locally acquired. Hypothetically, an individual may travel to the Northeast, return ill, and be listed in the CDC database as a case in Contra Costa, California. Researchers who study Lyme disease prevalence must dig, and dig hard, state by state to double check those cases that may not be locally acquired.[2]

In our paper in Healthcare, we did just that. However, our focus was Texas, so the digging was concentrated to one state, where we were able to remove non-locally-acquired cases.

Even if Lyme disease data were perfect, however, researchers and some public health officials are faced with a constant obstacle: Lyme disease is not the only tick-borne disease. Ticks can carry many different pathogens. Yet, the CDC does not publish county-level data for tick-borne diseases other than Lyme. Given many patients with Lyme disease report having multiple co-infections, knowing the disease risk is imperative for physician knowledge and adoption of prevention behaviors among local community residents.

“Lyme” is often a catch-all phrase

At the same time, “Lyme” is often used as a blanket term and adopted by national and state organizations to cover a host of possible other infections such as Babesia or ehrlichiosis. The catch-all phrase “Lyme” could potentially detract from the wide range and prevalence of other tick-borne diseases in the United States.

In our study, we attempted to improve surveillance of tick-borne diseases, including Lyme, using data drawn from a specialized survey—the Texans and Ticks Survey (TTS)—developed to collect state-, county-, and zip-code-level self-reported patient information.

TTS included the geographic location of tick bite encounters. All survey respondents reported a Lyme disease diagnosis by a medical professional. Survey respondents were asked if they had received a diagnosis, and if so, how they had been diagnosed. They could select: (1) Clinically (the doctor thinks you have Lyme disease based on your history and symptoms); (2) Western Blot, where some bands were positive; (3) Western Blot, where five or more bands were positive (“CDC-positive”); (4) IGeneX or other specialty lab; or (5) I do not know/Not sure.

Respondent tick bite encounters of those who self-reported a Lyme diagnosis were mapped at the county level. Since counties with higher populations would naturally experience more tick bites (all else held constant), by-county raw case frequencies were corrected with respect to the county’s population density, and standardized as the number of cases per 100,000 individuals.

Overall, we found that the survey respondents only reported tick bites in areas known to be suitable to ticks and tick-borne disease transmission as shown via canine serological and official CDC human reports. These findings held true for all official human Lyme cases, as well as canine Lyme, ehrlichiosis, and anaplasmosis (not pictured). 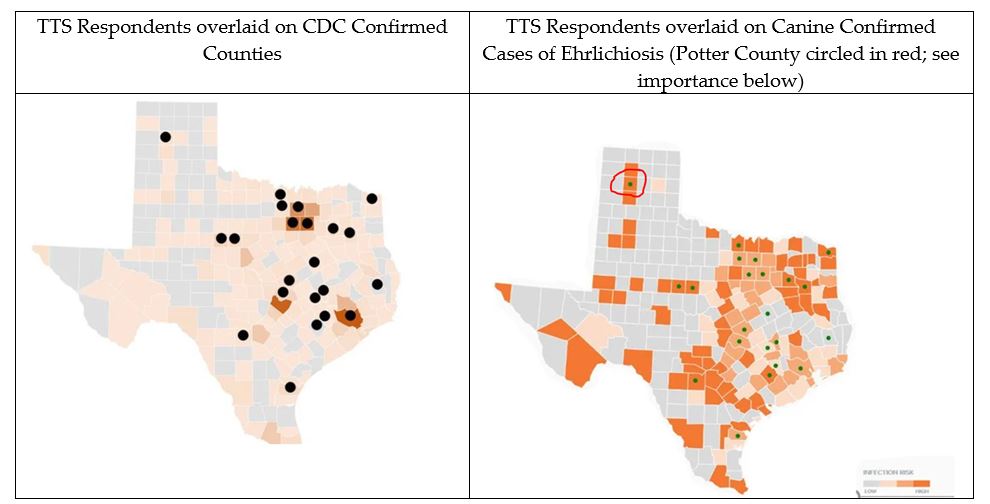 Importantly, clinically diagnosed patients match known and official cases of Lyme and other tick-borne diseases in Texas. Without access to CDC cases of other county-level tick-borne disease, self-reported tick bite encounters, associated diseases, and a one-health approach to assess overlap with human and canine cases, proved to be a promising exploratory study that warrants further attention at the national level. We suggest that self-reported clinically diagnosed patient reports and serological canine reports can serve as proxies for assessing human disease risk.

These findings were not a result of simple population density, and also followed the same hot-spot clusters as human and canine cases. Additionally, they occurred in ecosystems suitable for ticks. If these respondents were randomly lying about their tick bite locations, chances of all the respondents making up tick-bite encounters only in suitable or endemic counties would be almost impossible.

Back to our data dilemma: Why is providing only state level data insufficient? In states such as Texas, ecosystems are diverse and not all are suitable tick habitats. If the perception is that Texas is not endemic, we miss numerous counties where individuals have reported tick bites and a subsequent clinical Lyme diagnosis. Our study demonstrates that county-level data allow for more fine-tuned decision-making and risk assessment.

Take Potter County, Texas, as one example. The  drier northwestern area of the state, known as the Texas Panhandle, has an ecoregion suitable for tick habitat that extends into a drier, less tick-suitable ecosystem. The ecoregion that covers most of the panhandle is not as suitable for tick populations, However, the extension from the Rolling Plains into just a few counties does offer suitable tick habitat. We find overlap in Potter County with canine reports of tick-borne disease and CDC cases.

Did you know that in 2020, 1 in 20 dogs tested for ehrlichiosis in Potter County Texas was positive? However, only 1 in 1,000 canines in Potter County tested positive for Lyme disease. Should physicians test humans for ehrlichiosis in addition to Lyme disease in a few counties in the Texas Panhandle if the patient presents with tick-borne illness symptoms? I don’t have the answer to that. But I do know county-level data are desperately needed in tick-borne disease surveillance if public health officials hope to prevent disease.

Indeed, most diseases, for example West Nile, are incorporated into interactive, useful, county-level maps on the CDC webpage. Perhaps it is time to rethink the public health commitment to tick-borne disease surveillance so that both the general public and health officials can make informed and equitable decisions.

There are no sustainable, easy-to-access local tick-borne disease data that allow for communities to improve health outcomes for those who may be affected, including vulnerable populations who are the least likely to receive a diagnosis and care, especially in areas that are perceived to be “non-endemic.”

Dr. Sarah Maxwell is an assistant provost and associate professor at the University of Texas at Dallas. Her research and grants focus on tick-borne disease surveillance and patient experiences with Lyme disease. She and her co-authors are founding members of ICI-Vector, created to Integrate, Communicate, and Inform others about tick-borne disease. She also serves on the scientific board of the Texas Lyme Alliance.

[1] Researchers may apply for these data from the CDC, but if granted access, are prohibited from publishing data at the county-level.

[2] My understanding is that not all states differentiate locally-acquired cases.