TOUCHED BY LYME: KC's Kathy White, telling it like it is to the CDC 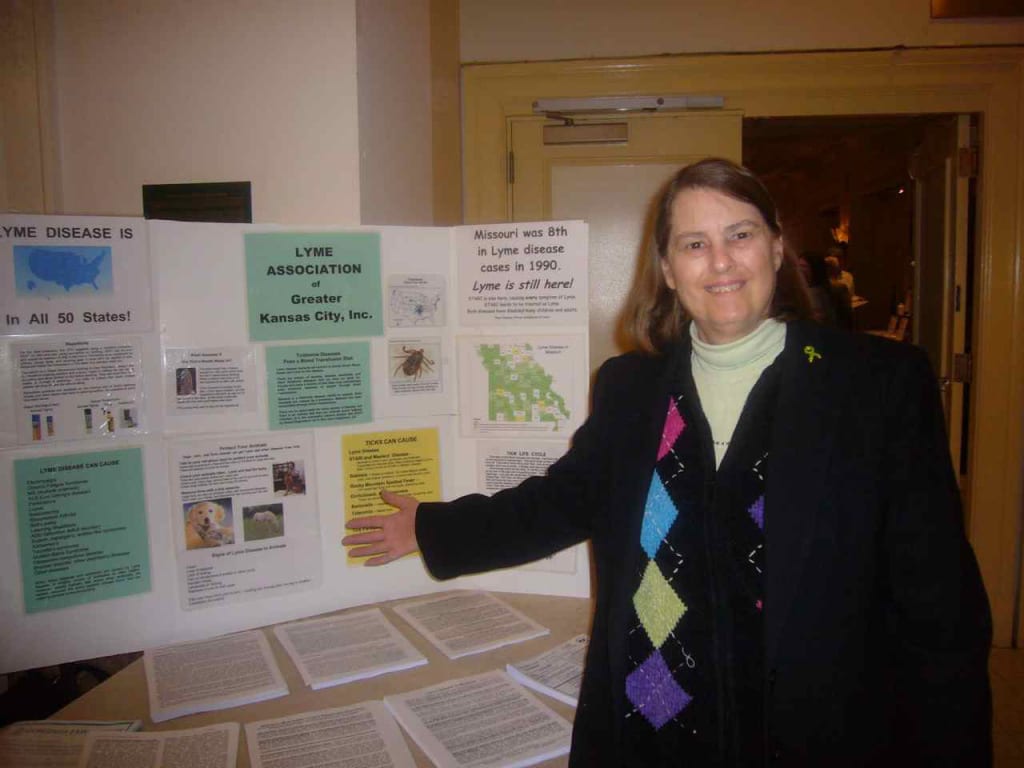 This Lyme advocate had to miss a planned meeting with CDC officials because she had a stroke. She delivered her presentation to them from her hospital bed, via telephone. Here’s what she said.

Hello. My name is Kathy White. I had a stroke 12 days ago and am talking to you from my hospital room in Kansas. I got a tick bite in 1998 in Kansas City, Kansas, while I was supervising recess in a grassy area of a schoolyard.  I got Lyme disease and babesia and have been sick ever since. I had to quit my teaching job. For the past 14 years, I have been an officer of the Lyme Association of Greater Kansas City. Our organization was formed in 1993. We serve people throughout Missouri and Kansas and also other states. We publish a brochure and a monthly newsletter. We give information to patients, the public, and medical professionals, and education packets to schools.  We cooperate with the efforts of the Lyme Disease Association. A major concern of ours is difficulty getting diagnosed and treated. Most doctors in our area are unable to diagnose and treat us or refuse to do so.

There are 3 aspects of Lyme disease prevention: (1) preventing tick bites, (2) preventing early Lyme disease with antbiotics immedately after a tick bite, and (3) preventing the disease from becoming chronic. (1) Many tick bites could be prevented by controlling the deer population, using safe pesticides, and using permethrin on clothing. (2 & 3) The CDC can easily prevent many cases of early Lyme and chronic Lyme by making doctors aware that Lyme is in every state, by encouraging prompt and adequate treatment on the CDC website, and by dropping their website link to the IDSA treatment guidelines and creating a link to the ILADS guidelines instead.

The CDC is funded by taxpayers in all 50 states. Therefore, its employees should care about Lyme disease victims in all 50 states, not just the Northeast. The CDC should work for everybody. Statements on the  website mislead doctors in most states into thinking that Lyme disease is just in the Northeast and Upper Midwest and not in their state. This causes many doctors to fail to diagnose it and even to refuse to test for it. If a patient does persuade a doctor to give the test, and the test is positive, the doctor often says, “Your test was a false positive, because we don’t have Lyme disease here.”  One patient in St. Louis was told, “Our hospital has had a number of false positive tests lately.” The statements on the CDC website that say Lyme disease is mostly in the NE and Upper Midwest should be revised to say that, although most reports are in the NE & Upper Midwest, Lyme is actually in all 50 states, but it is vastly underdiagnosed and underreported in most states. Support groups have helped thousands of patients whose cases did not get reported, even if they met reporting criteria.  Many people in Missouri, Kansas, and other states are going from doctor to for many years before they finally get diagnosed. Even at this late date, most people improve with long-term antibiotic treatment. There are many stories of children who missed years of school, but after lengthy treatment managed to get a GED and attend college. Long-term treatment is getting children out of bed and out of their wheelchairs.

The CDC should quit endorsing the ELISA test. It misses far too many cases and causes people to become disabled from lack of a diagnosis.

The CDC website says that ticks should be removed with tweezers, and it discourages the use of tick removers. This is unwise. Researchers at Ohio State University found that tick removers that slide under a tick are superior to tweezers for removing the tiny nymphs and do a better job of getting all the mouth parts out and most of the cement. Wherever tweezers are mentioned, the website should say “fine-pointed tweezers.” It is very difficult to remove the tiny ticks with tweezers without squeezing the gut. Many people have developed Lyme disease after a tick was removed with tweezers, even if the tick was attached only a short time.

It does not take at least 24 hours for a tick to transmit Lyme disease. Although most ticks take about that long or longer, many people are becoming infected in less time than that. Dr. Willy Burgdorfer said at a Lyme disease conference at Bard College in 1999 that about 5-10% of ticks that are carrying Lyme disease have a systemic infection and have the disease in their saliva and can transmit it as soon as they bite. He said, “There is no safety window.” That means that all statements that say it takes “at least” so many days or hours for a tick to transmit Lyme disease are false.

In 1990, Missouri ranked eighth in the nation in reported cases of Lyme disease. Then the CDC decided to call the disease STARI, because of genetic differences in the bacterium, and because it was being transmitted by lone star ticks.  All the signs and symptoms in Missouri are exactly the same as Lyme disease. There is not a single symptom of Lyme disease that people in Missouri are not getting after lone star tick bites, except the ACA skin condition found in Europe. A study by Dr. Ed Masters found that patients in Missouri are twice as likely to develop arthritis as Lyme patients in the rest of the country.  This is not a mild illness.  There are many strains of flu, but they are all called flu.  If different bacteria cause Lyme symptoms, they should all be called Lyme so they can be treated.

Several studies have found Lyme disease Bb bacteria in lone star ticks. Calling the disease STARI is causing thousands of cases to be undiagnosed in the central and southern states. Children have missed years of school, and adults have missed years of work, because the CDC has misled doctors into thinking that the disease in this area is a mild illness that can be ignored. Lyme disease and STARI are both in MO.  The fact that STARI is in Missouri does not prevent Lyme disease from also being in the state, just as one strain of flu does not prevent other strains of flu from being in the same state at the same time.

A statement on the CDC website about babesia says, “Babesia is mostly in the Northeast.” It should be revised to say, “Most reports of babesia microti are in the Northeast, but there are other strains of babesia in other parts of the country.”  The vast majority of doctors in most states are unaware that babesia is in their state, and they are thus not diagnosing or reporting it.

The babesia reporting criteria says that if a patient has a positive IgM test for babesia, but the IgG is negative, the IgM must be a false positive. This statement should be removed from the critera. It’s an  opinion. There’s no evidence for this. Many patients with Lyme disease and babesia may never develop IgG antibodies, because these diseases lower the immune system and can prevent the antibodies from developing.

The CDC website says prophylactic treatment of RMSF fails to prevent the disease. Actually, in the study on this subject, lab animals were given only a single dose of doxycycline. There is no proof that longer treatment wouldn’t work.  People given 4 weeks of treatment for a tick bite to prevent Lyme disease are not getting RMSF or ehrlichiosis.

The purpose of the CDC is to help people, not to harm them. Please stop making us disabled. Please stop misleading doctors into thinking that there is no Lyme disease or babesia in their states. Please remove the  link to the IDSA guidelines from your website. Please allow us to get diagnosed and treated adequately. Thank-you.