Timelines–a new way to explain health history to your doctor 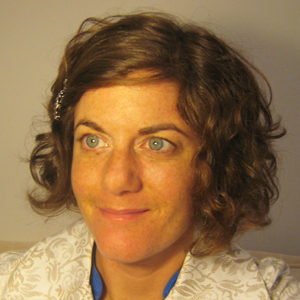 As a patient with many mysterious symptoms, I know what it’s like to befuddle my doctors. I had heart palpitations, tingling in my hands and feet, sensory issues, and gut problems. None of these symptoms fit with my primary autoimmune diagnosis. For years, I found myself shuttling from expert to expert trying to figure out what was going on.

I bet you know someone who’s been through something similar. Both Lyme patients and autoimmune patients like me often face long delays in getting diagnosed, which prolongs the time we have to deal with frightening symptoms.

In my case, after many specialist visits and a trip to the Cleveland Clinic, I finally got another autoimmune diagnosis that began to tie the pieces together. But it was a long, painful journey.

Along the way, I began experimenting with creating visuals of my symptoms and history. This helped me tell a more coherent story and give my doctors another way of “seeing” what was going on with me.

As a designer with an interest in data visualization, I had a strong hunch that this approach could help me make my doctor appointments more productive and efficient. Indeed, my doctors loved it. Many said “this is the coolest thing ever,” and told me they wished their medical records looked more like this – like a timeline.

As you can see from the segment below, some symptoms were constant over a long period of time, and others came and went. 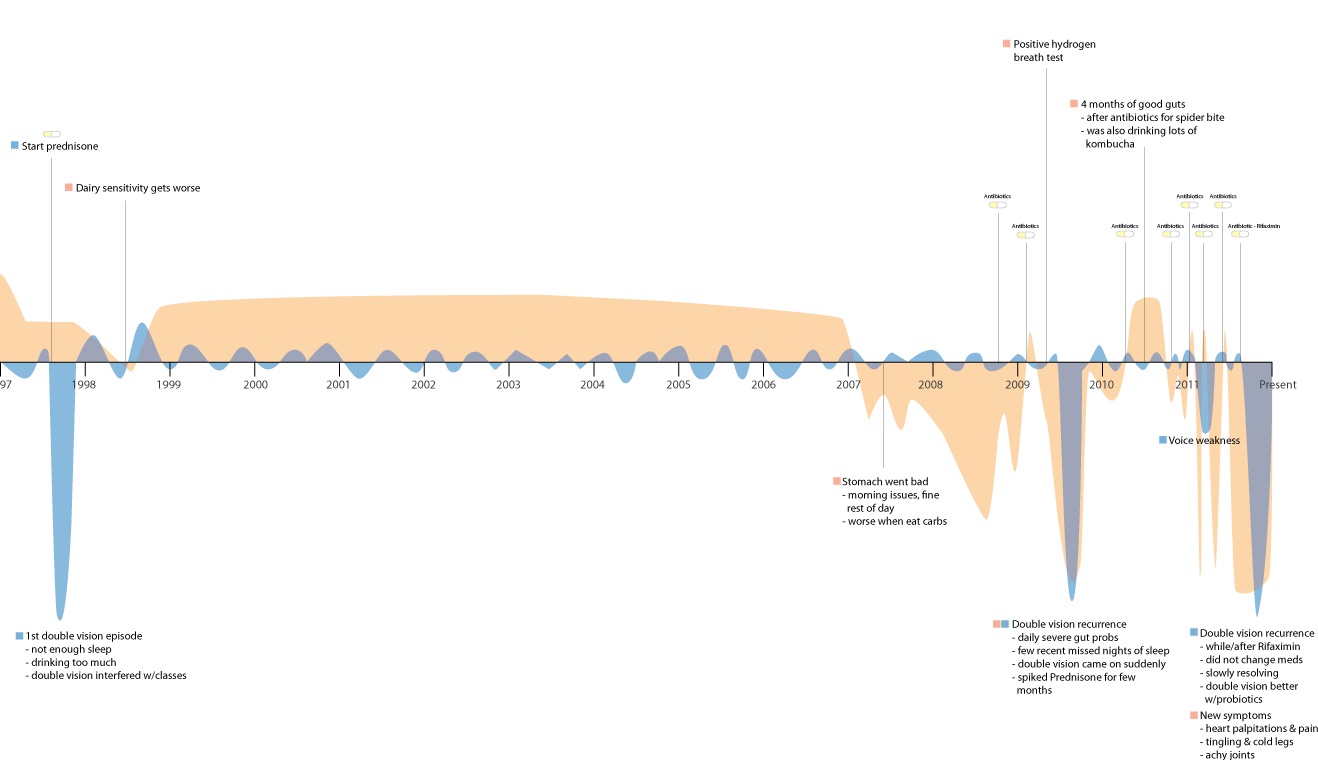 So last year, I started Pictal Health to bring this visual approach to more patients and doctors. I have worked with many people who have mysterious, rare, or autoimmune conditions and who are either looking for a diagnosis or trying to communicate a complicated story. I’ve worked with multiple clients who have a Lyme diagnosis, and I’d like to share a case study.

Kelly (not her real name) was referred to me by her functional medicine doctor in California, a Lyme specialist named Dr. Sunya Schweig. Our goal in working together was to create a holistic view of her health history, one that might give us some clues as to why she got sick, what other conditions she might have, and what factors might worsen her symptoms.

As with all clients I work with, Kelly started by independently filling out a health history form, which gave her a chance to reflect about her life-long mental and physical health. We then scheduled a 90-minute conversation, using her history document as a jumping off point.

In these conversations, my role is to listen deeply. By asking questions and clarifying information, I help elicit as complete a story as possible. Because I am not a medical professional, I do not attempt to find answers or come to any conclusions. I simply help others articulate their stories.

I have found that this initial conversation is often deeply meaningful for my clients, and that my simple act of listening provides them with a feeling of being heard. Unfortunately, due to time constraints and other factors, this is all too rare in our interactions with our doctors.

As I talked with Kelly, she described environmental issues that arose from living in a moldy house. And she told me how stressful her life has been with five children. At one point, one of her children died of chronic medical issues the same week that another was born–an unthinkable and extremely stressful series of events. A picture of Kelly’s life and symptoms began to sharpen in my mind.

Drafting a picture of her life and symptoms

After the call, I created a draft of Kelly’s timeline, showing how her symptoms, life events and stress levels, diagnoses, and treatments unfolded.

It showed when her symptoms started, when they got worse, and how environmental issues (mold) and life stressors seemed to exacerbate them. Here’s one part of her timeline: 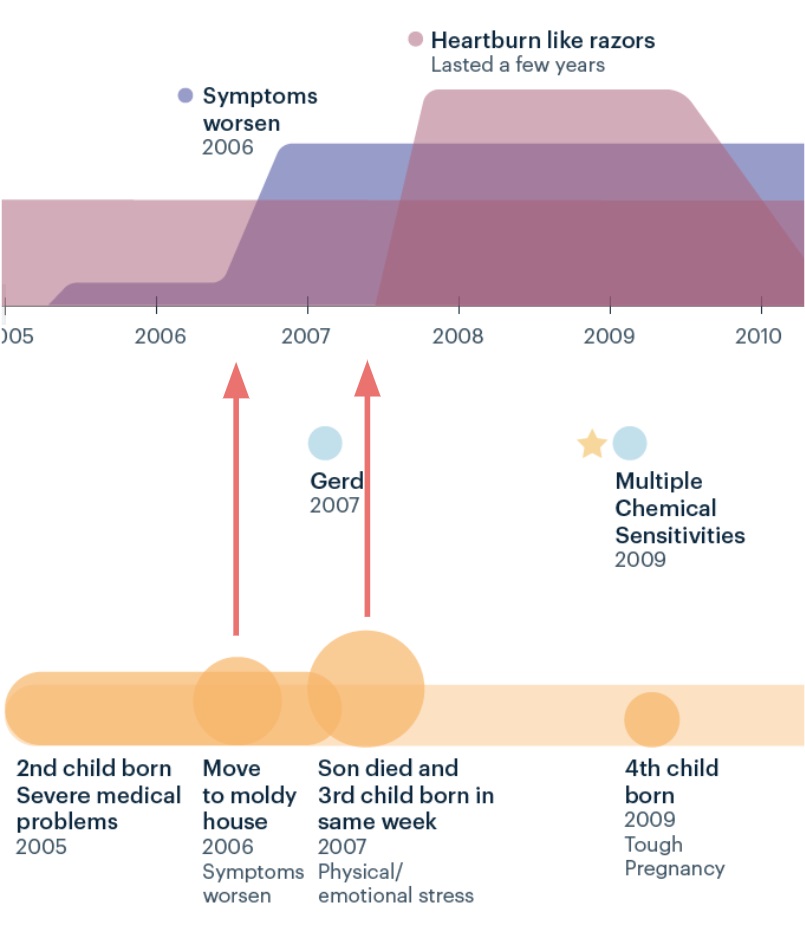 It was apparent that over the past few years, as she introduced a treatment regimen, her symptoms had been diminishing. As with many other people I have worked with, this pattern helped to reinforce that she seemed to be on the right path, treatment-wise.

All in all, this timeline created a nice at-a-glance view of her health journey: where she’d been, and what she’d tried. Even though she knew each individual fact, by putting them together she was able to see new patterns and understand her own past a little better.

In addition to the timeline, Kelly and I also worked together to create a map of her symptoms. Because she had a variety of symptoms and some of them were limited to one side of her body, it seemed important to represent them visually.

We mapped her symptoms to a body outline, using a mixture of shapes and words to communicate about how she felt. This was an important alternate view of her health, as it highlighted how chemical exposures were a key symptom trigger. 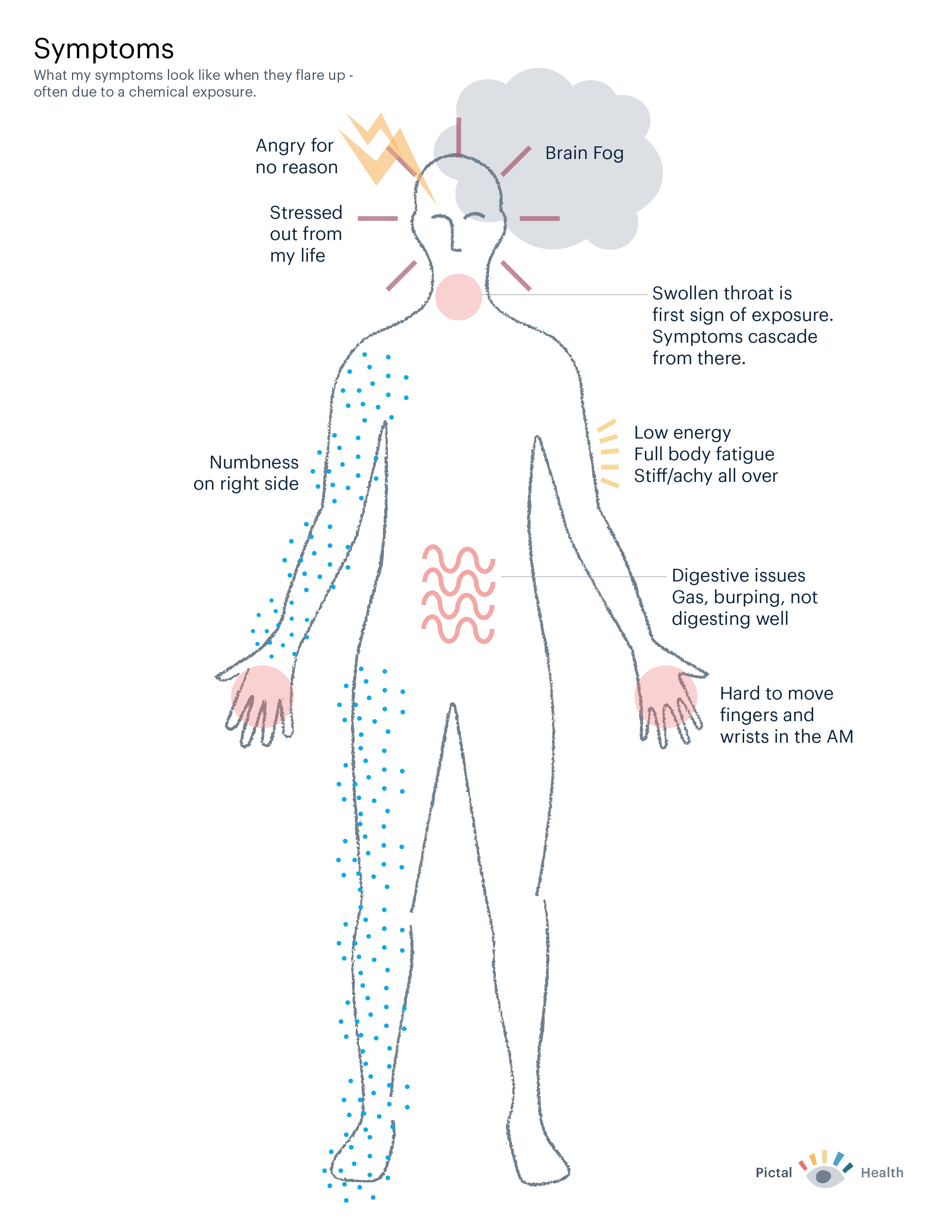 People like Kelly and others with invisible symptoms often feel dismissed, disbelieved, and misunderstood. Visualizing symptoms can be a powerful way to articulate how their bodies feel and hopefully be taken more seriously.

But we weren’t worried about these communication problems with Dr. Schweig, who was eager to see Kelly’s timeline and enthusiastic about seeing information in this way. He said, “A lot of my time is used in a non-effective way in visits. This helps jumpstart the conversation. I want you to do this for all of my patients.”

I’ve found many doctors have a similar reaction when it comes to seeing patients’ histories visually. This approach helps them avoid having to dig through the medical record, or worse, a big pile of faxed documents.

It also draws out information–like life stressors–that is not well integrated in our current medical records. Many doctors have told me things like: “This is exactly what I’m trying to do in my head when I’m talking with patients.”

Kelly said, “It’s beautiful to look at and truly easy to understand. I didn’t realize how impactful a visual timeline would be. ”

I was happy to be able to facilitate communication between Kelly and Dr. Schweig. I’ve also had a chance to work with additional patients with Lyme since then – all with significantly more complex health histories than Kelly’s.

The most recent Lyme patient I worked with said, “With your help, I’ve been able to pull together aspects of my history into what feels like the beginnings of a coherent sentence. It’s like the timeline is saying something. I can show it to my doctors so they can begin to decipher what my body is trying to say. I feel clearer and more hopeful than I have in a long time.”

Katie McCurdy is an autoimmune patient, a designer and the founder of Pictal Health. She can be contacted via her website.