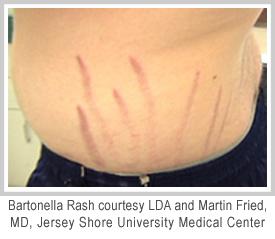 Bartonella are bacteria that live inside cells; they can infect humans, mammals, and a wide range of wild animals. Not all Bartonella species cause disease in humans. Bartonella henselae causes an important emerging infection first reported in 1990 and described as a new species in 1992. It is mainly carried by cats and causes cat-scratch disease, endocarditis, and several other serious diseases in humans.

Bartonella bacteria are known to be carried by fleas, body lice and ticks. Scientists suspect that ticks are a source of infection in some human cases of bartonellosis. People with tick bites and no known exposure to cats have acquired the disease. People who recall being bitten by ticks have been co-infected with Lyme and Bartonella. More research needs to be done to establish the role of ticks in spreading the disease.

Scientists have identified several species of Bartonella. One is carried by sand flies in the Andes Mountains in Peru, Columbia, and Ecuador. Another is found worldwide in human body lice. Bartonella bacteria have been found in the European sheep tick. Five different Bartonella species have been detected in 19.2% of I. pacificus ticks collected in California.

Bartonellosis is often mild but in serious cases it can affect the whole body. Early signs are fever, fatigue, headache, poor appetite, and an unusual, streaked rash. Swollen glands are typical, especially around the head, neck and arms. Burrascano suspects bartonellosis when neurologic symptoms are out of proportion to the other systemic symptoms of chronic Lyme. He also notes gastritis, lower abdominal pain, sore soles, and tender subcutaneous nodules along the extremities. Lymph nodes may be enlarged and the throat can be sore.

Polymerase chain reaction (PCR) and tissue biopsy can be used, however they are also insensitive, as are standard blood tests.

Erythromycin and doxycycline have been used successfully for standard Bartonella, but Burrascano suspects that tick-borne Bartonella is different and recommends levofloxacin or, for children under 18, azithromycin.