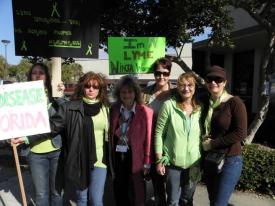 A small band of Florida Lyme patients gathered outside the offices of the Orlando Sentinel newspaper Friday, to protest its reprinting of the Chicago Trib's accuracy-challenged article about chronic Lyme disease.

Allison Hoffman-Caruana , a 39-year-old Florida mother of five, has struggled with myriad health problems ever since she was five years old. That’s when her doctor made note of a bug bite on her back, surrounded by an obvious bull’s-eye rash.  (She still has the medical records to prove it.) Her health went up and down as she grew older, but a few years ago, her system really went whack-o. Was it arthritis? Lupus? Parkinson’s? There were also cardiac issues, and seriously high blood pressure.  She had all the tests—including two Lyme western blots that were CDC-positive. Yet, her doctors insisted it couldn’t be Lyme. (Choose your reason: “those are false positives,” “there’s no Lyme in Florida,” “blah, blah, blah”—she heard them all.)

When she eventually had a Lyme-positive spinal tap, somebody finally listened. Up to a point.  She was put on IV drugs for 30 days. “I was starting to feel better,” she recalls, “though I still had many symptoms.”  But, at the end of 30 days, the PICC line was pulled. No more IV treatment for her. (Who says the IDSA guidelines are only “recommendations”? Most doctors and insurance companies treat them as mandatory.) She begged her doctor not to stop treating. She says he just kept saying “you don’t have Lyme.”

Now, at considerable expense, Allison travels to an out-of-state, ILADS-affiliated, Lyme specialist.  It costs a boatload of money, it’s hard on the whole family, and it’s helping her get well. Which will put her in a better position to care for her five children, four of whom have also tested positive for Lyme.

So, when Allison recently opened her daily newspaper, the Orlando Sentinel, and saw that it had reprinted the now-notorious, accuracy-challenged Lyme-related Chicago Tribune news article, she got mad. She contacted the newspaper and expressed her displeasure. The Sentinel essentially shrugged its editorial shoulders and said, “We didn’t write it.”

So what if they didn’t write it, Allison wanted to know. They printed it. They put it out there, with their implied endorsement, making it even harder for Florida Lyme patients to get properly diagnosed and treated.  She asked for space in the paper for a rebuttal. Write a letter, they said. Which she did. (Read it here.)

But she wanted to do more. She put out the word for Orlando Lyme patients to gather with signs outside the office of the Sentinel.  It was a small but hardy band, holding home-made signs, speaking to people who passed by.  It was not the big demonstration that Allison had hoped for. But she’s as determined as ever.

She wants another, bigger, better-planned Lyme Awareness event for May. “There’s been enough bashing of Lyme patients,” she says. “We’ve got to stand up for ourselves.”

With more time to get the word out, she hopes to connect with Lyme patients from all over Florida. If you are one of them, you can email her here. You can also message her through Facebook.