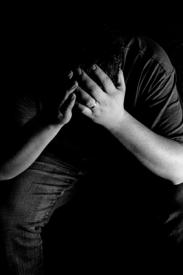 On July 8th, police in Ocala, Florida, made a shocking discovery in a travel trailer at the side of a highway–the bodies of 48-year-old George Strobos and his 49-year-old wife Jonalyn. It turns out the couple, both suffering from advanced Lyme disease, had taken their own lives. Last night, their son, Michael Strobo, of Austin, Texas, made a series of heartfelt postings about his parents on the CALDA Facebook page. Michael subsequently gave me permission to re-post his writings here.

Michael originally wrote in eight different segments on Facebook, which I have compiled into one column here.

Part 1: Hello all, I’d like to introduce myself. My name is Michael Strobo, I am the son of the late George and Jonalyn Strobo, the couple who died in the murder-suicide at a truck stop in Florida. God bless each and every one of you (and family members too 🙂 I didn’t know what was going on when mom first started showing signs [of Lyme]-everything snowballed so fast I couldn’t keep up. She was hospitalized on two different occasions nearly a year apart for similar episodes of delirium, psychosis, repetitious ranting, organ systems shutting down…The second ER visit the sharp doc diagnosed her with advanced LD. I thought she was partly a hypochondriac when she began reading and searching and reading and reading and talking about all this information which was all alien to me…then she got to taking some antibiotics regimen set forth by someone who wasn’t even an MD.

Part 2: …….all at once she was displaying physical and mental effects of a person twice her age. I don’t guess she ever recovered back to “normal”. Soon my dad was experimenting with antibiotics and claimed Herxheimer’s reactions in the joints….mom was laid off for something unrelated (i.e. the economy) Thank God unemployment kicked in. Some time in there was really when The Unknown set in… Who’s gonna treat it? Who’s gonna say for sure what it is? How long will it take? How much will it cost? How soon can she go back to work? Is it all in her (their) head??? I’m sure everyone can relate. I feel guilty now, but back then I just didn’t know what to do or think. And I’m sorry for everyone out there who has to experience it. Often times no matter how difficult something is to deal with, it’s a whole lot easier to deal with it if YOU KNOW YOUR ENEMY!! Well as I stated there were a lot of Unknowns.

Part 3: For whatever reason, I believe partially it was the inability to prescribe long term abx, their answers were not here in TX. The last time I saw them well (all relative) was at the end of last August as they headed for Florida. The next ten months was filled with chasing rent houses, numerous doctors; so many… I couldn’t keep up with what city they were in or the doctors’ names… My mom’s unemployment got extended a couple of times, which helped a little, but then one day it ran out-soon after her insurance ran out as well. Well this certainly came at a bad time. For months they had slowly been selling off possessions and draining their savings accounts. For almost two months, they lived in a cargo trailer. 5′ x 10′. I’m not kidding. My dad had installed a “kitchen” sink in the front of it, built bunk beds out of 2″ x 2″s and they used pool floaties as cushions to sleep on.

Part 4: A neighbor pipe-fitter had cut a hole in the wall and welded a brace in which they installed an AC unit. They lived in that thing at RV parks for two months. I called it the RT. It wasn’t a recreational vehicle (RV) it was a recreational trailer. They used it as “home” until they purchased a travel trailer from a guy at a gas station somewhere. Well that pretty much killed their funds. They did return once for one week in April, I was working as a full-time firefighter and attending a full time paramedic program so my time was limited. They looked bad. They both had lost a lot of weight and looked as if they had aged ten years in ten months. We had dinner together one night–I brought pizza. And in the same old nature of my parents, they demanded they pay for their share. I didn’t let them though, and I’ll never forget how they always tried to pay for things like that 🙂 One day we took a several hour drive to pick up a piece of material I had bought for my property.

Part 5: That was the last time I spent any length of time with them. My mom slept in the back seat of the truck almost the whole way there and back. It was heart wrenching to see them in that condition. Words can’t explain. Again, y’all know. Well they headed back to Florida. And in the next few months I receiveda few phone calls, emails or texts out of despair. That was not uncommon. I am the only remaining child–my brother died ten years ago from cancer. I helped out a little financially. Mostly I tried to give them hope, give them something to look forward to. Back in December I had purchased 20 acres. The deciding factor for me to buy it was that I was allowed per covenant restrictions to build a main residence and a smaller, second residence on the property. That was going to be where my parents were going to live when they got through this blasted disease.

Part 6: The best thing was that there is a flat spot conducive for a large garden, and the way I had it all laid out, my dad and mom would get to drive past the existing windmill on their way to and from their house. Something I thought was to be very special for my dad considering all the stories he had of climbing every windmill they passed growing up as a kid in TX, AZ, and LA. I also promised to give them my .243 caliber hunting rifle as a gift when they got better and could move back home. The .243 is a great caliber for TX Hill Country whitetail deer, and small enough my mom would be able to shoot it with ease. Everytime I talked with them I tried to drive them into The Word. Studying the Word of God. I know from tough times in life, albeit on a much smaller scale, that the best source of peace and hope in this life comes only from God. We have a Creator. A faithful, loving, compassionate Father. I reminded them constantly of this.

Part 7: My dad sent me a text once,  that said I was right. He felt much more peaceful after having listened to a study of Pastor Murray’s. (Pastor Arnold Murray of The Shepherd’s Chapel). In the last hand-written letter my mom mailed to me she said my dad had been sleeping better since she had been reading The Bibleto him before bed. This is something I encourage everybody to do. They were in so much pain. Constantly. Emotionally, physically. They had lost everything, including their health. They were living completely on the road. Two trucks and two trailers, one to live in and one to store their last possessions. With no money and no answers. No plan, no outlook. Nothing but grey areas, stress, loss of mental function, constant nausea and analgesic patches……..Well I did get a phone call the day they died. Those details are mine. I don’t know what to say now. I’m sorry there are so many people affected by such a terrible, stealthy enemy.

Part 8: Please stay strong if you are affected, please support those around you who are. Everybody feel free to contact me anytime you would like. If I can be of help to anyone trying to get something accomplished politically, let me know. I don’t know what else to say. Thank you all for your thoughts and words and prayers. My parents were special people. I spread most of their ashes near where we had spread my brother’s ashes 10 years ago. I kept a little of all 3 of them though. I’m going to spread the rest of it out at my property under that windmill where their ashes can turn back to dust together. I know their souls have already gone back to be with God who gave them. I know I’ll rejoin them one day. Thank you all for taking the time to read this. God bless you, and again, if you need anything, don’t be a stranger!

Read the original news story about his parents here.